Twitch is the world’s leading live streaming platform for gamers. The idea of exploring the Twitch dataset is to see which streamers, teams, and games are most popular. Also, we would like to see which people or bots are considered the most reliable for VIP or moderator badges. We will measure the popularity of streamers with the number of their followers and viewers. Other types of users also participate in a stream, and they are called chatters. Each streamer has a network of chatters, VIPs, and moderators, so we will use the MAGE PageRank algorithm to check for the most popular streamer. Besides that, we can calculate the betweenness centrality on this network and see which streamer has the most influence. This blog will be divided into three parts, depending on the part of the application we are building: 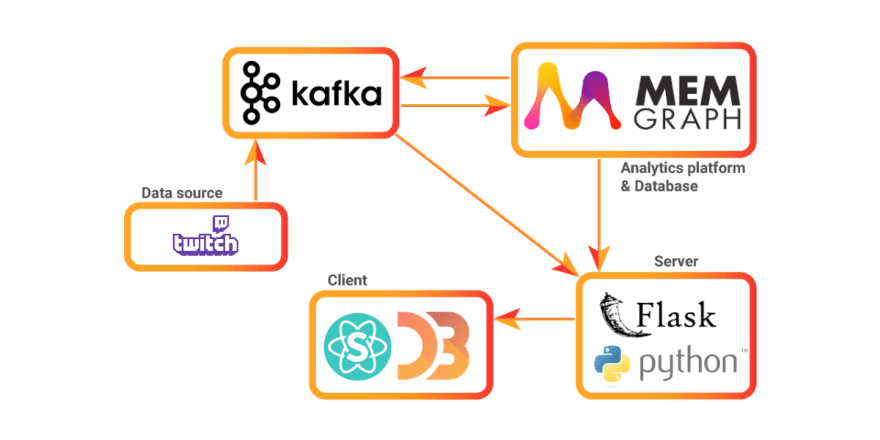 The data was collected using Twitch API. The data needed to be rearranged so that it could fit the idea of graph databases. Here you can find the script that creates .csv files which we'll load into Memgraph. The files which we'll use are: streamers.csv, teams.csv, vips.csv, moderators.csv and chatters.csv. In streamers.csv we can find important information about languages the user speaks and games the user streams. Those two will actually be nodes in our graph database. 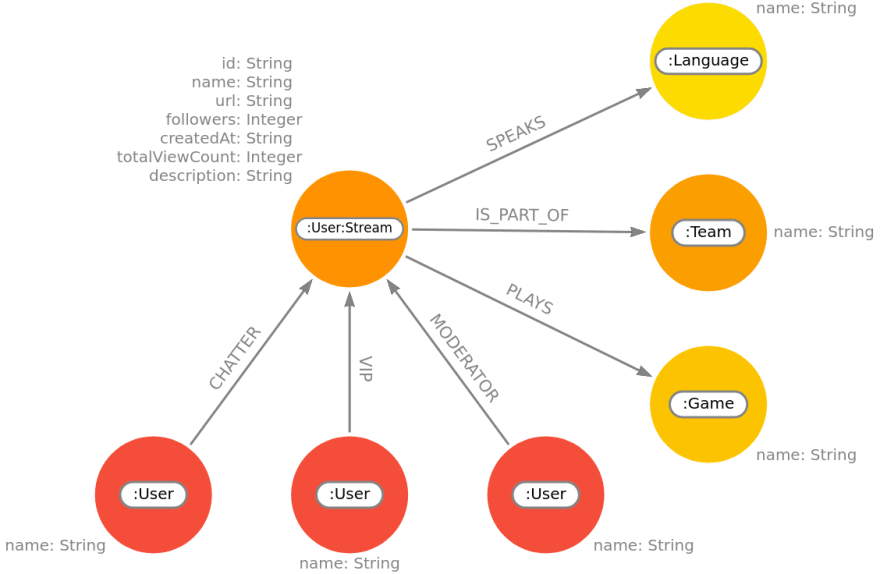 Every node except for the :User:Stream has only a name. Stream label is given to the users who have live streams. Followers and view count properties will be important in measuring their popularity. Language, team, and game could be properties on :User:Stream nodes, but since there are many users who speak the same language, belong to the same team, or play the same game, we want them to be connected. Now when we understand the Twitch network better, let's visualize this network by making the whole web application!

Since we are building a web application using many technologies, we will need to install a few tools before starting:

You can find the whole project here. We'll be referring to it a lot, so you should definitely check it out. In the end, our project structure will look like this:

Now we will step by step build our application from bottom to top. First, we have to create the backend and memgraph directories. Within the memgraph directory, we create the import-data subdirectory and move all the CSV files we've scraped to it or we can use files we already have. In the beginning, our project structure looks like this:

Dockerizing Memgraph and the Backend

The docker-compose.yml can be a lot simpler, but the app-tier and networks sections will come in handy later. We are building the memgraph-mage service which will have a running Memgraph instance along with MAGE query modules. Next, we need to have volumes to persist our data. In that way, we will have to load data only in the first run. In the subfolder import-data we have all the .csv files which we have to load into Memgraph. We called our backend service twitch-app and this service depends on memgraph-mage. In the backend, we first want to load data into Memgraph, and for this to work, there should be a running Memgraph instance. Our backend will be running on port 5000. Now let's take a look at the backend Dockerfile.

In the first run, the flag --populate should definitely be included, so that the data would be loaded into Memgraph. Later on, if you were to restart the app, make sure to remove the --populate flag. Due to the volumes which we created, the data will stay loaded into Memgraph. We are using micro web framework Flask, that is, a package Werkzeug, which is a utility library for Python. It is a toolkit for Web Server Gateway Interface applications that can realize software objects for request, response, and utility functions. That will be just enough for our web application since the backend will communicate with Memgraph on request and send a response back. We are also copying requirements.txt to the container and installing all the dependencies. Let's see what's in there:

As expected, Flask is there, so it will be installed in our container. Next, we have pymgclient, Memgraph database adapter for Python language on top of which gqlalchemy is built. We will connect to the database with gqlalchemy and it will assist us in writing and running queries on Memgraph.

We will be building API with the help of which frontend will be able to get all necessary data from Memgraph. First, we need to set up everything for the Flask server. We are adding arguments such as --host, --port and --debug flags. Also, we have created the previously mentioned --populate flag. We initialize our Flask app and save these arguments to use them when running the app.

When app.py is started, a connection to Memgraph is initiated. All methods which communicate with our instance of Memgraph are located in database.py. When the connection is established, the data can be loaded. We are going to use LOAD CSV Cypher clauses to import data into Memgraph. There are different ways of importing data, but this seemed like the most appropriate one. For example, let's show how streamers.csv can be loaded:

After our data is loaded into Memgraph, we run the Flask server. Currently, the app doesn't do much. The only thing you can actually check is whether your data is truly in Memgraph. The easiest way, especially if you are a visual type, is by using Memgraph Lab. Since you have a running Memgraph instance, you can just install Memgraph Lab, open it and click on the Connect button. Then, on the tab Overview you can see the total number of nodes and edges in your database.

Nice - our data is really there! Now we can add some simple methods in our backend to try out the connection with Memgraph.

App route says that we can get the response at localhost:5000/nodes. The method sends a query to Memgraph which will execute it and fetch the results. In our case, there is only one result, and that is the total number of nodes in the database. We send it as a JSON response. Try it out!

The idea behind these methods was to find out some interesting statistics about the network. All of them have a similar implementation and you can check them out here. Let's see how we got top games:

The most popular game is the one that is being played by the most players. We would like to get a game name and the number of players that play it, in descending order. With Cypher queries and Memgraph, that’s pretty easy! After that, we just have to put our data in a dictionary and then the response will be in JSON format and easy to work with. Therefore, the response will be a list of games along with the number of players that play that game, in descending order. The length of the list depends on the argument num_of_games.

Besides general statistics, we would like to visualize some information about streamers. It would be fun to search our database for our favorite streamer. We want to get the game the streamer plays, the language the streamer speaks and the team the streamer is part of.

Through the response we’ll get the streamer node along with the links the streamer is connected to. This data will be useful on the frontend side, where we will be able to draw graphs with this data. Now let’s see how Memgraph’s query modules work, particularly PageRank and Betweenness Centrality algorithms. With these two we will measure the popularity and influence of streamers. Using these procedures you can simply determine which node is the most relevant in your graph. Here is get_page_rank() method:

We filtered the results by the :Stream and :User label, since we are interested in measuring the influence of them, rather than different parts of our graph. There are many different methods which you can implement, but here is the list of the ones you can find in the repository:

That's it for now! In the next part of this blog post, find out how to build React application on top of the backend, and in the third part, learn how to ingest new data with Kafka and see how we can see that in our visualization. Feel free to join our Discord Community server, where you can ask any question related to this blog post or anything else you want to know about Memgraph.