What are Docker Containers?

Each Docker Container is essentially an isolated software-defined environment. Containers are used to help solve the problem of “Well it works on my machine.” Prior to the rise in popularity of containers, developers were using Virtual Machines to test code in a consistent environment. Virtual machines are similar to containers, as they contain an application and its dependencies, but additionally include a guest operating system and require a Hypervisor.

While Virtual Machines offer a lot of benefits, they are slower to boot up than containers because of the added cost of running an operating system in each virtual machine. Though Docker is not the first company to offer a tool for containerization, it seems to have come at the right time (2013). Developers were looking for an alternative to Virtual Machines as DevOps and the Microservices architecture rose in popularity. Docker containers meet that need and are supported in a lot of other third-party applications and services (AWS, Travis CI, Jenkins, etc.).

How can they be used with microservices?

What tools exist for working with Docker Containers?

There are quite a few developer tools available for working with Docker Containers. One of the most popular solutions is Docker Compose. Docker Compose uses a .yml to define a multi-container configuration. This Docker Compose .yml file is used to spin up multiple containers at one time. This simplifies the process of running and testing your Microservices application.

How can you use containers on your development machine to test your code?

Currently, Docker Compose is one of the most popular options for spinning up multiple containers locally. However, because each docker image must be built from a Dockerfile, developers who want to use Docker Compose to spin up containers locally must recreate the docker images each time there are changes to code for a given microservice. When working with teams of many developers who may not work on every repository daily, it can become tedious to make sure that they are testing local code against the most recent versions of the other microservices that rely on that microservice. 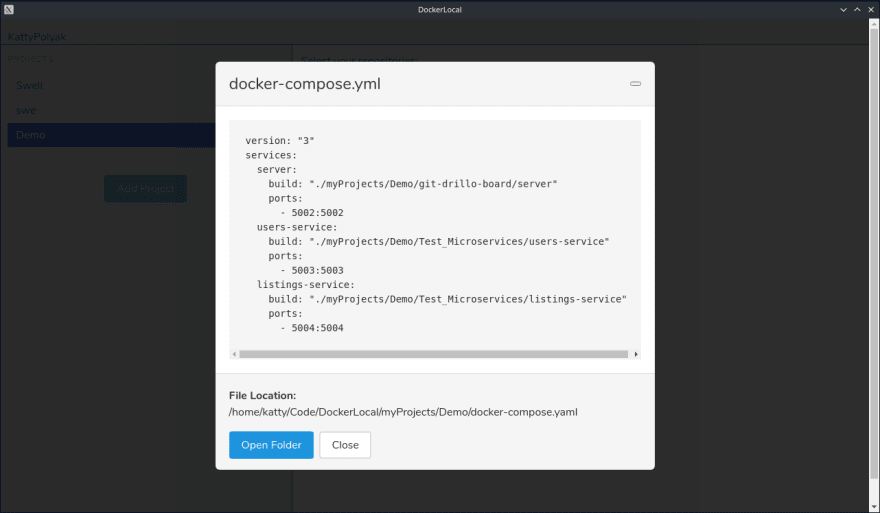 DockerLocal is an Electron application that aims to fill this need for a way to dynamically create docker compose files. Once developers sign in with Github, DockerLocal allows developers to create projects for each microservice application they are working on. Developers can then choose the github repositories associated with that project to clone the latest version of each repository. DockerLocal then creates a Docker Compose .yml file with only the microservices you’re not currently working on locally. DockerLocal is launching today and is available for download and contributions here. Have any feedback? Let us know in the comments below.

Katty Polyak
Software engineer specialized in Javascript full stack web development
top 26 Interviewer Questions You Should know
#webdev #programming #career
What was your win this week?
#discuss #weeklyretro
You're running an online conference but get called out for having an all-male speaker lineup 2 days prior. Yo, What do you do?
#discuss #serverless #aws

Once suspended, kattypolyak will not be able to comment or publish posts until their suspension is removed.

Once unsuspended, kattypolyak will be able to comment and publish posts again.

Once unpublished, all posts by kattypolyak will become hidden and only accessible to themselves.

If kattypolyak is not suspended, they can still re-publish their posts from their dashboard.

Once unpublished, this post will become invisible to the public and only accessible to Katty Polyak.

Thanks for keeping DEV Community 👩‍💻👨‍💻 safe. Here is what you can do to flag kattypolyak:

Unflagging kattypolyak will restore default visibility to their posts.