Last week there was a fairly momentous occurance in the JavaScript framework world: Vue.js passed React.js in the number of people who have 'starred' it on Github. 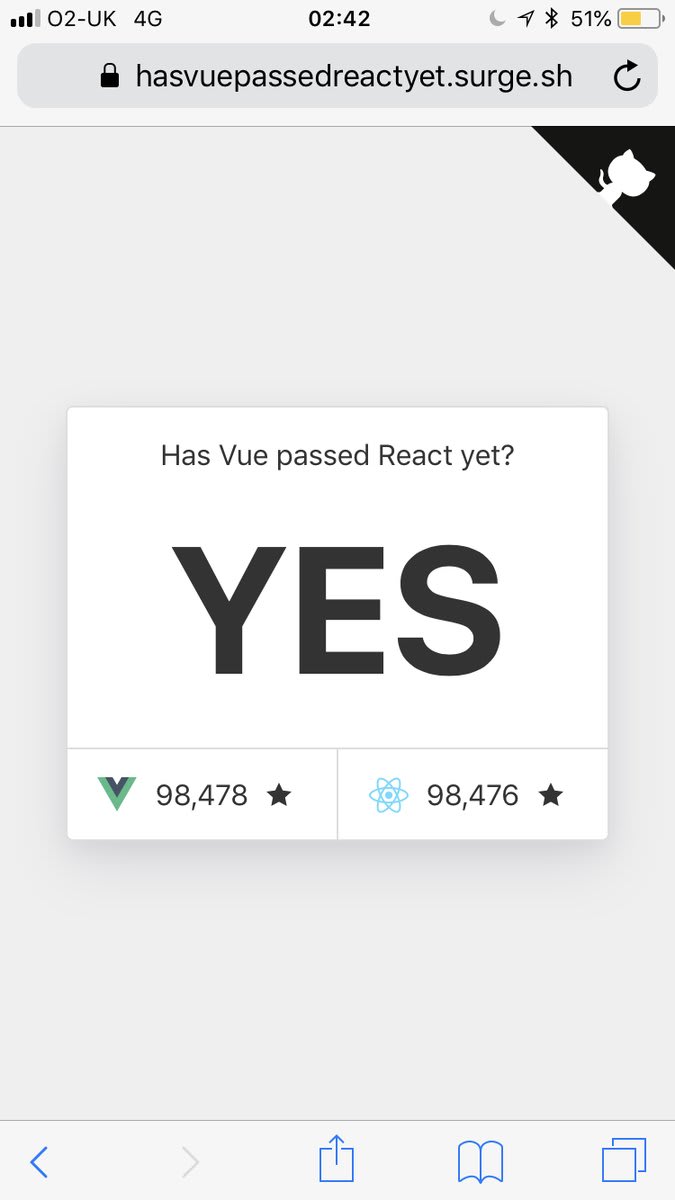 Congratulations to @vuejs for surpassing React’s star count on GitHub! Seems like I almost captured a historical moment by accident.

Using a tool called Star History, we can see that this measure in particular tells a story of React's historical dominance being overtaken by the skyrocketing Vue. 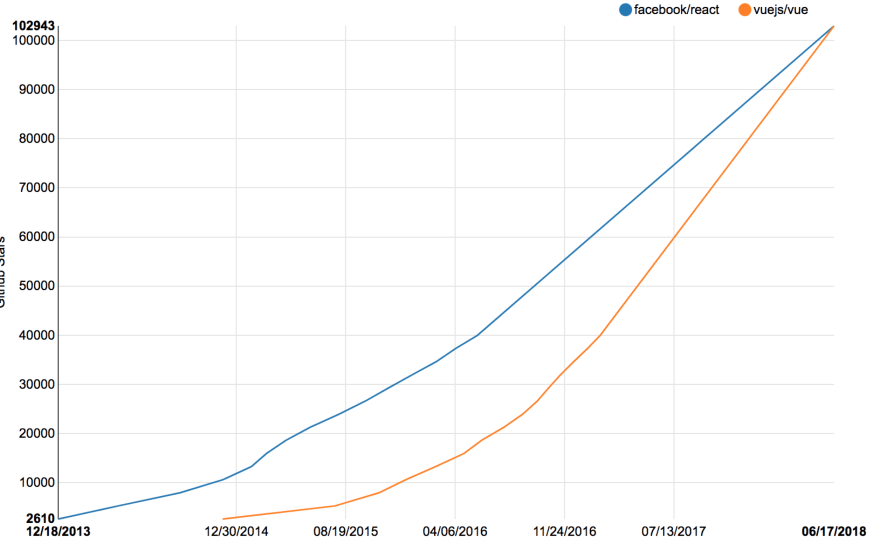 Signalling Vs Actual Use

Don't get me wrong, I love Vue - I've been using it far more than React recently - but github stars are more of a measure of the "hipness" of a project than its actual use. A blatant example raised compared the popular Apache server with a relatively frivolous JavaScript project:

To get a better sense of the relative popularity of Vue vs React, we need some way to measure actual usage of the project.

Using NPM Downloads as a proxy for use

There is no perfect measure - there are many many ways to install and use any of these projects - but NPM has become the de facto standard for installing JavaScript packages.

If we look at download statistics for the core package of each of these frameworks - the vue package and the react package, that should give us a reasonable proxy for actual use.

To do this, I used a website called npm-stat.com, which allows you to generate graphs of historical downloads of NPM packages going back to February of 2015. (Which is as far back as the NPM registry reports download data).

The Data: React is Still Dominating

Looking at the last 2 years of data, we can see that in stark contrast to the github stars data, React is still dominating in terms of actual usage as measured by NPM package downloads.

Adding Angular to the mix

While the discussion last week was primarily focused on React and Vue, let's also take a look at the other member of the "big 3" frameworks, Angular.

Since the Angular community has more or less forked into "Angular.js" and "Angular" (version 2 and later, using typescript), we'll add both of these to our lookups. 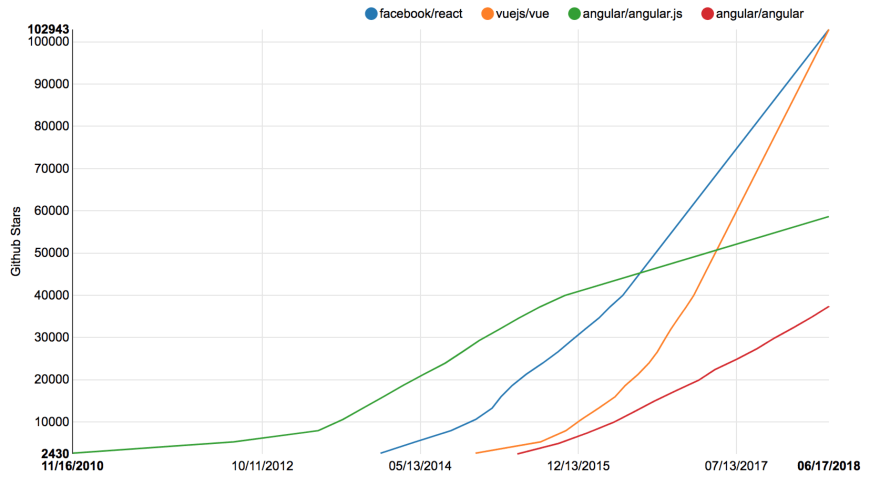 We can see that Angular.js got a bit of a headstart over React and Vue, but was passed by React in "star power" in mid 2016, and by Vue in 2017. The second iteration, Angular, has been catching up to Angular.js gradually since its launch in September 2016, but continues to be 4th in this measure of popularity.

Looking at usage instead of "star power" for the two variants of Angular tells yet another story.

*The 'angular' package is the original Angular.js, while @angular/core is the core of the new Angular.

In terms of usage, the new Angular skyrocketed from nothing to passing both Vue and Angular.js immediately upon release, and has maintained that lead ever since, though coming nowhere close to React.

By digging into the NPM download statistics, we find that despite the hype around Vue's skyrocketing github stars, React is still the 800 pound gorilla in the JavaScript framework space. It is about to cross the mammoth 10 million downloads per month, and has been growing at a torrid rate.

That said, Vue fans have no reason to be sad. Over the last 2 years, Vue has grown at a faster percentage rate than any of the other dominant JavaScript frameworks, recently catching up to Angular.js and gradually narrowing the gap between it and both Angular and React.

P.S. - If you're interested in these types of topics, you should probably follow me on Twitter or join my mailing list. I send out a weekly newsletter called the ‘Friday Frontend’. Every Friday I send out 15 links to the best articles, tutorials, and announcements in CSS/SCSS, JavaScript, and assorted other awesome Front-end News. Sign up here: https://zendev.com/friday-frontend.html

Once suspended, kball will not be able to comment or publish posts until their suspension is removed.

Once unsuspended, kball will be able to comment and publish posts again.

Once unpublished, all posts by kball will become hidden and only accessible to themselves.

If kball is not suspended, they can still re-publish their posts from their dashboard.

Once unpublished, this post will become invisible to the public and only accessible to Kevin Ball.

Thanks for keeping DEV Community 👩‍💻👨‍💻 safe. Here is what you can do to flag kball:

Unflagging kball will restore default visibility to their posts.