When you start writing simple JavaScript programs, you don’t need to worry about the number of variables you are using, or how different functions and objects work together.

For example, most people start out by using a lot of global variables , or variables that are scoped at the top level of the file. They are not part of any individual class, object or function.

For example, this is a global variable called state:

But once your program starts to involve many different functions and/or objects, you will need to create a more rigorous set of rules for your code.

This is where the concept of state comes into play. State describes the status of the entire program or an individual object. It could be text, a number, a boolean, or another data type.

It’s a common tool for coordinating code. For example, once you update state, a bunch of different functions can instantly react to that change.

This article describes state in the context of React, a popular JavaScript library.

But guess what? Even state can give you headaches once your code gets complicated! Changing state can cause unintended consequences.

Let’s stop right there. State is a popular tool in object-oriented programming , or OOP. But, many programmers prefer functional programming , which discourages state changes. JavaScript supports both paradigms.

This tutorial will show how you might cook a meal of spaghetti and sauce from an OOP and functional perspective.

Here’s a quick preview of the two different approaches: 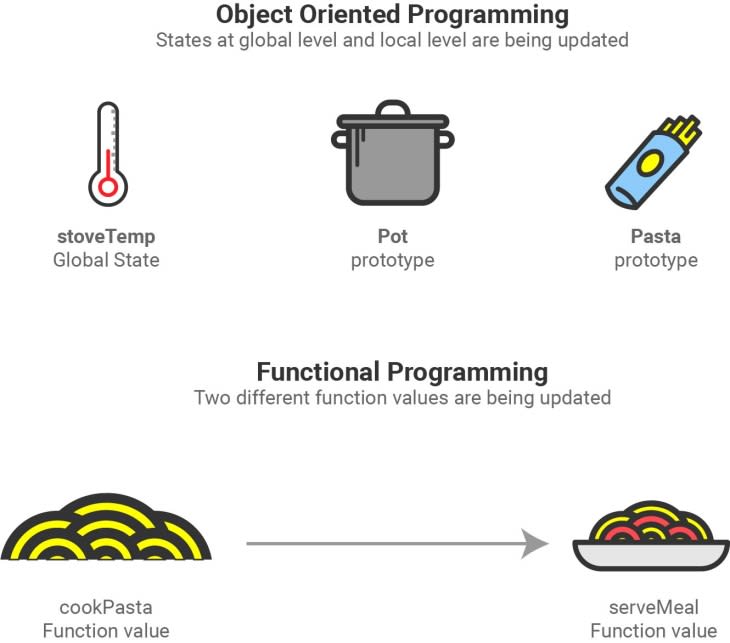 In the graphic above, we showed two different approaches to making this pasta dinner:

The object-oriented approach focuses on updating state , so our code will have state at two different levels:

We are going to use ES6 syntax in this tutorial to create objects. Here’s an example of global state and the “Pot” prototype.

Note: I simplified the console.log statement to focus on the state update.

Here’s a visual representation of that logic: 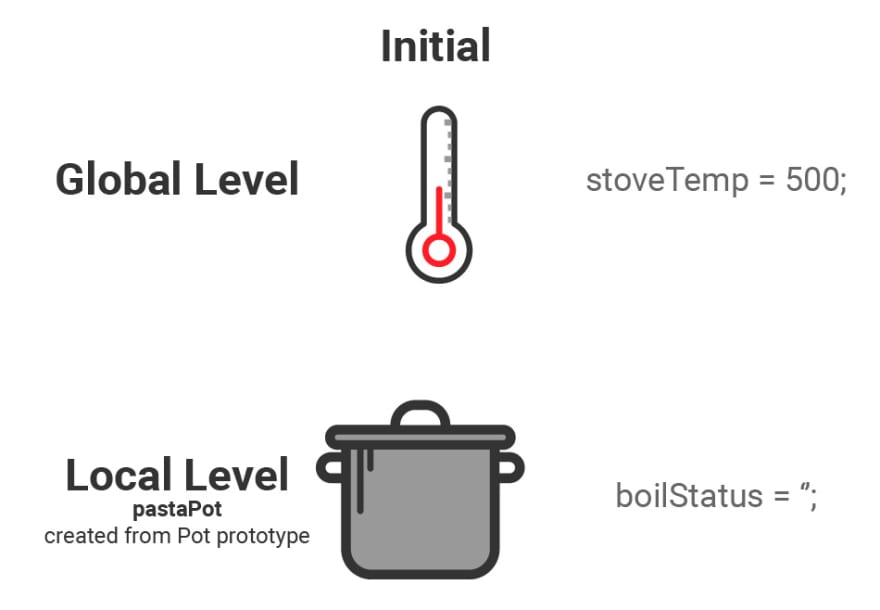 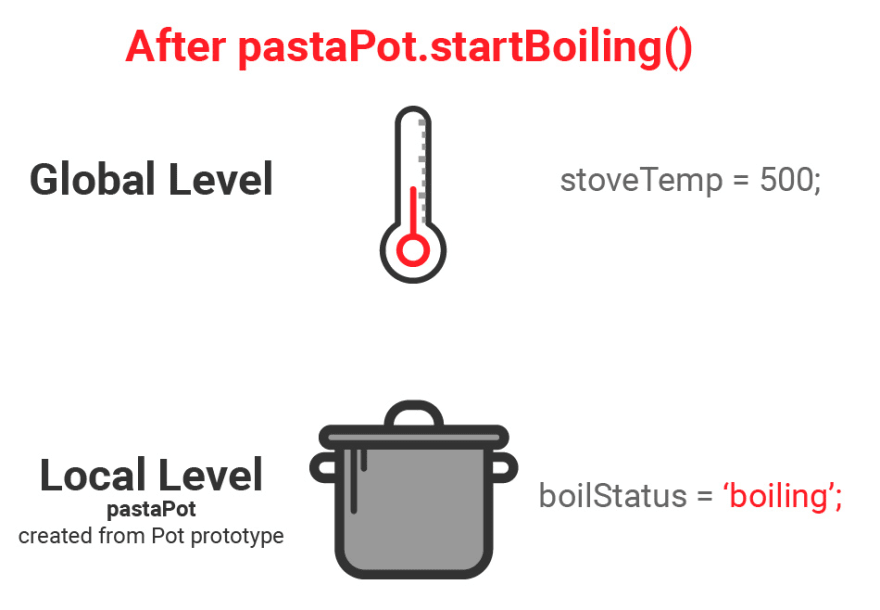 There are two states, and when the pastaPot is created via the Pot prototype, it initially has an empty boilStatus. But then, there is a state change.

We run pastaPot.startBoiling(), and now the boilStatus (local state) is “boiling”, since the global state of stoveTemp is over 400.

Now let’s go one step further. We will allow the pasta to become boiled due to the state of pastaPot.

Here’s the code we will add to the snippet above:

Woah! That’s a lot at once. Here’s what happened. 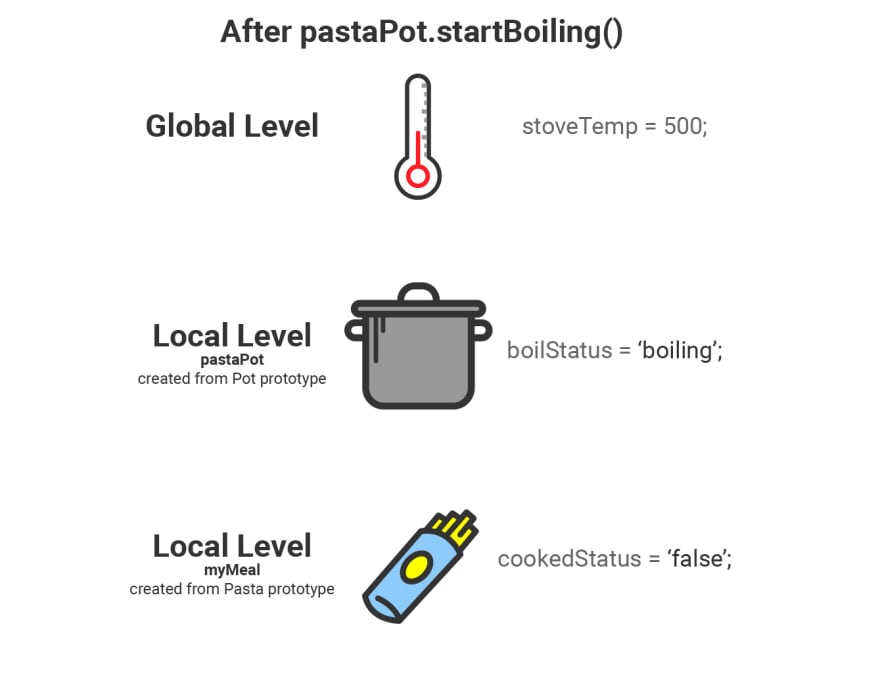 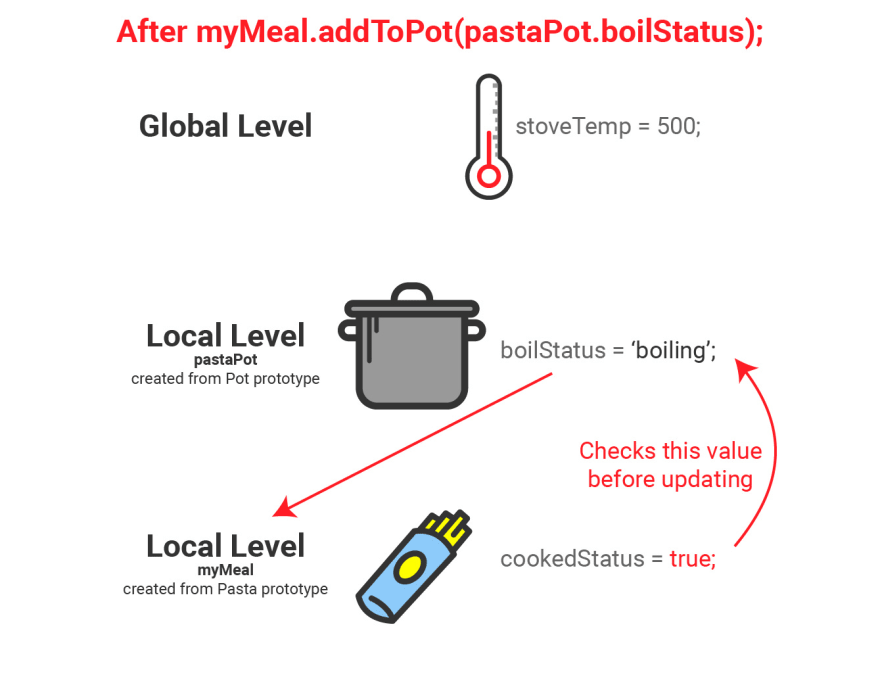 So, we now have the local state of one object, that depends on the local state of another object. And that local state depended on some global state! You can see how this can be challenging. But, it is at least easy to follow for now, since states are updated explicitly.

In order to fully understand state, you should be able to find a way to accomplish the same outcome as the code above without actually modifying state. This is where functional programming helps!

Functional programming has two core values that separate it from OOP: immutability and pure functions.

I am not going to go into too much depth on those topics, but if you want to learn more, I encourage you to check out this guide to functional programming in JavaScript.

Both of these principles discourage the use of state modification in your code. That means that we can’t use local or global state.

Functional programming instead encourages us to pass in parameters to individual functions. We can use outside variables, but we can’t use them as state.

Here’s an example of a function that will boil the pasta.

This code will successfully return a string of ‘cooked’. But notice- there is no object that we are updating. The function simply returns the value that will be used in the next step.

Instead, we are focused on the inputs and outputs of one function: cookPasta.

This perspective looks at the transformation of the food itself, rather than the tools that are used to cook it. It’s a little harder to visualize, but we don’t need to have the function depend on external state.

Think of it as a “timeline view” for the progress of the meal- this particular function just covers the first part, the transition from dry pasta to cooked pasta.

Now let’s cover the second part as the food is served. Here’s the code that will serve the meal. It will come after the code block above.

Now, we are delivering the results of the cookPasta function directly into the serveMeal function. Again, we are able to do this without changing state, or changing data structures.

Here’s a diagram that uses the “timeline view” to show how these two functions work together.

If you would like to read more visual tutorials about HTML, CSS and JavaScript, check out the main CodeAnalogies site for 50+ tutorials.

Reactive Variables are the BEST feature in Svelte