Arrays are single variables ( objects ) which can contain many data values (types ) in them arranged in a list. These values are enclosed in a square brackets and are seperated from one another by a comma.

An Array can hold multiple data values in itself and therefore can store a wide range of information in its variable.

An Array does not have a data type of its own.

Arrays are very important in the fact that they help in storing data(values) in a collective list and provides you with the easy accessiblity to get the individual content of each list item in the array and use them in your code. This beats the other alternative of you having to declare a variable individually for every single item(data) you want to use in your code.

If for example, you want create a variable to store the list of the types of watches you're selling on your business website, then an array should be the way to go instead of creating different variables for each of the watches you want to store in it.

Difference Between An Array And An Object.

If you have come across an object, then you would realize that an array and an object sometimes may get complicatedly similiar in ideas. The difference here is that an Array holds multiple data, all of which relates to certain type, purpose or kind. For example,

...An object on the other hand, is best used as a variable set to contain the overall information relating to a particular item.

An array can be created in two ways

These arrays are all empty as there are no data values in them yet.

The first way may lead to complications, it is highly recommended you use the second way(Array literal syntax).

Storing Data Values In An Array

From the code example above, we have created a variable footballTeams and assigned an array of teams listed in the square brackets all seperated by a comma from the other.

Arrays dont have to contain only one data type (string) but can contain different data types all enclosed in the same array(string, numbers, boolean etc).

Here, you'll see that the array contains different data types stored in it. This is an efficient way of storing information, profiles etc on your variables.

Here's another tip! we can also store an array(s) inside another array.

From the code, you'll notice that inside the array, there is another array holding an information of two strings and a number.

Array(s) inside another array are called multidimensional arrays

The items or elements in an array sometimes may be needed to be accessed and used individually or perform certain tasks like loop iteration and so on.

The items in an array can be accessed using a method called the Bracket Notation.

The items each have a number tag or position that enables them to be accessed individually. This is called the Index Number.

In this instance, we have created an array of book genres and in order to access any of them, we employ the method above called the bracket notation.

We do this by using the bracket symbol [] and then writing into the bracket; the index number of the array-item we intend on getting.

The index number counts from 0 for the first item. That is,

...accessing all array-items will then be

Printing the code above on your browser console using the console.log() will give you all the results of all the array-items on your console.

Note that we said that array and objects were different in some cases, but the truth in general is that arrays are technically still objects. Still its best to refer to them as arrays to avoid complications.

The method used in the previous example, made use of the bracket notation and the indexes of each of the elements (items) in the array to access them individually.

This is what is meant by arrays using numbered indexes.

Use numbered indexes instead.

Another thing to note here is that the javascript parser is white space insensitive as similar to the browser engine.

So, in order for a cleaner code, your array can be arranged like this

Properties Of An Array

This is the most important property of an array and probably the only one you may need to use practically in your code.

The length property is a property attached to an array (object) that calculates and outputs the number of elements (items) in an array.

The length property is used to determine the number and as the name implies, the length of an array. It is very useful in loops iteration.

The length property returns the result of 5 which is the number of the elements in the array books.

Looping Through An Array With The Length Property

Note: We loop through arrays in order to perform a number of operations on the items of the array based on a laid out condition.

Other properties of an array are

Now that we have gotten a pretty deep introduction to arrays, lets turn a chapter and take a look at the most important and powerful things about arrays......the array methods.

Methods are basically special functions of objects that performs certain action on them and technically arrays can be referred to as objects.

Arrays have over 20 valid methods that can be used on them but we are only going to go over the major ones.

The pop method pops out or removes the last element (item) from an array.

The pop() method here removes the last item from the list, which in this case is mangos and then returns a new array with the value of the element(s) that was removed. That is...

This changes the initial list of the array, therefore...

Using the pop() method on an empty array [ ] will return the keyword undefined as the result.

This is basically the opposite of the pop() method as the push() method is used to push in or add an element to the end of an array.

The array languages was created and stored in it was a string of 3 words(languages).

The push() method takes the parameter(s) to be added in the brackets, separated by commas.

The variable newLang was created and used to store the altered array created as a result of adding in a new string to the end of the array using the push() method..

The initial array languages is now modified . It now produces a result of four strings including the newly added one.

The variable newLang produces a result of 4 which is now the length of the new array.

This method is used to concatenate (add) two or more arrays together.

A new array is created to store the results of the added arrays. The original arrays are left untouched. 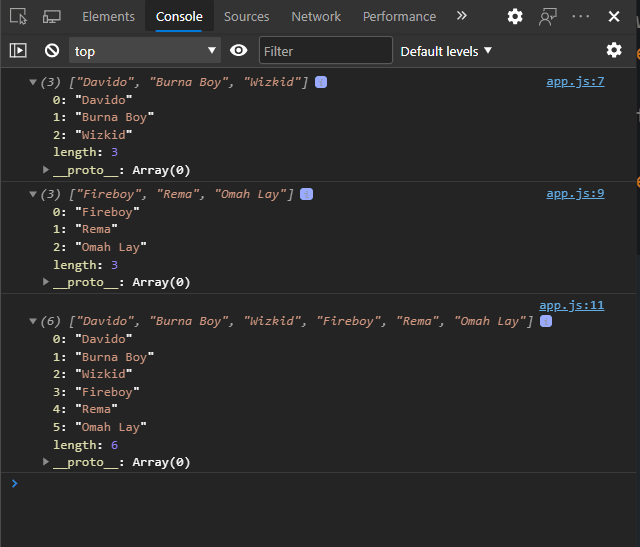 NOTE: In a case of adding more than one arrays, the same method is employed, only in this case...

The arrays to be added are put in the parantheses seperated from each other with a comma, e.g:

This method as the name implies joins all the elements in the array and returns them in a string format. The unique thing about this method is the fact that you can specify the separator used to separate the elements (, * - .etc)

This method is used to add, remove or replace element(s) in an array.

testArray.splice( index number, No of elements to be removed, newelement1, newelement2....newelementn) 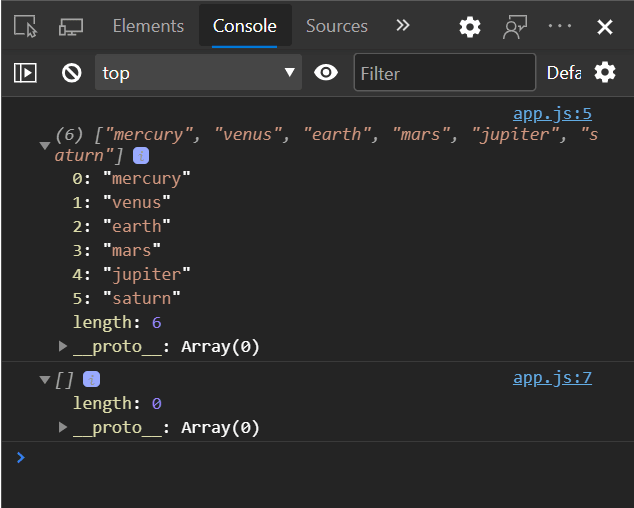 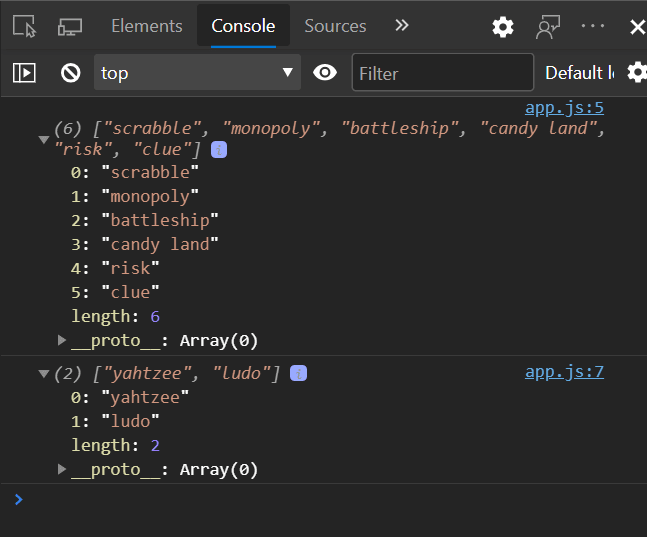 This method is often confused with the splice() method, because of how they both sound and thier functions.

The slice() method is used to slice out or cut out a piece (copy) of the elements of an array based on its parameters given. It creates a new array for the piece that was cut out from the original array. 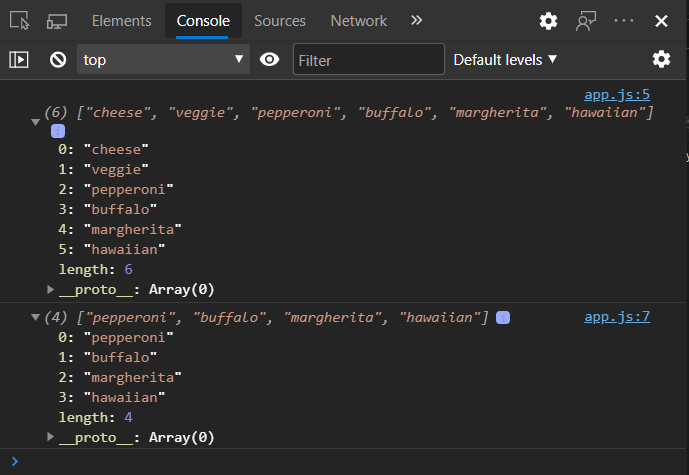 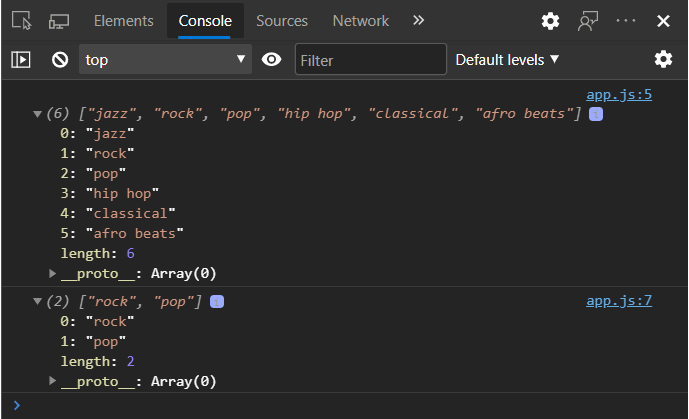 This method is used to compare and arrange elements of an array in an ordered pattern. The default pattern is alphabetically (for letters) and ascending (for numbers). 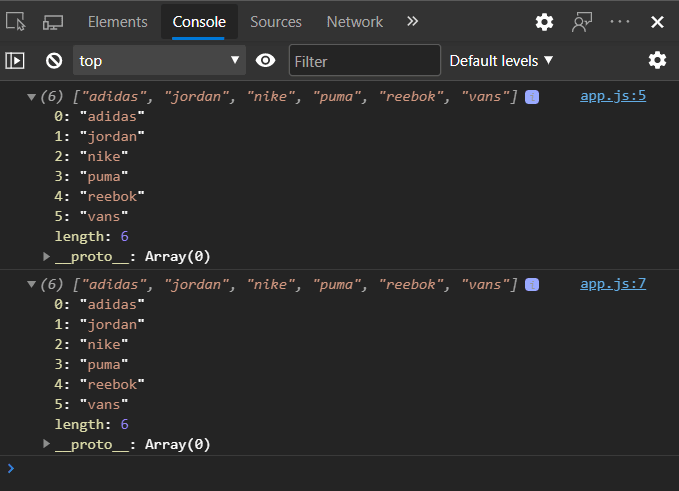 The reverse() method as the name implies is used to reverse the order of elements in an array. 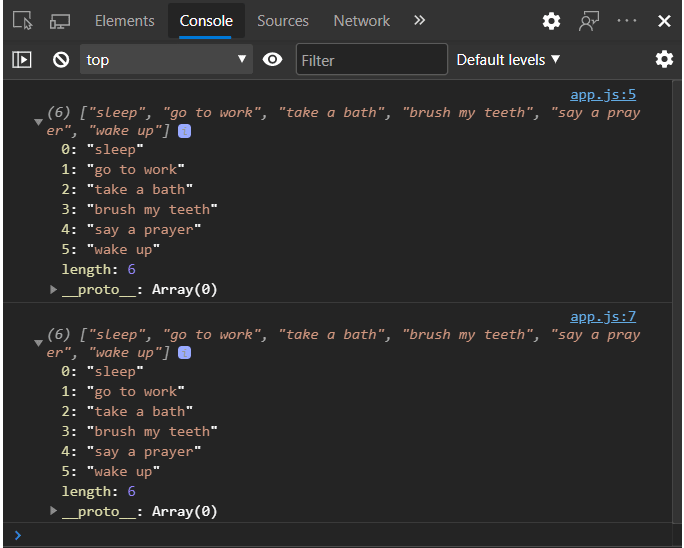 Without a need for much explanation, the workings of the reverse() method are quite obvious. It reverses the order or arrangement of the array and returns a new array with the elements arranged backwards.

NOTE: The original array is now altered and will give the same results as when its reversed. 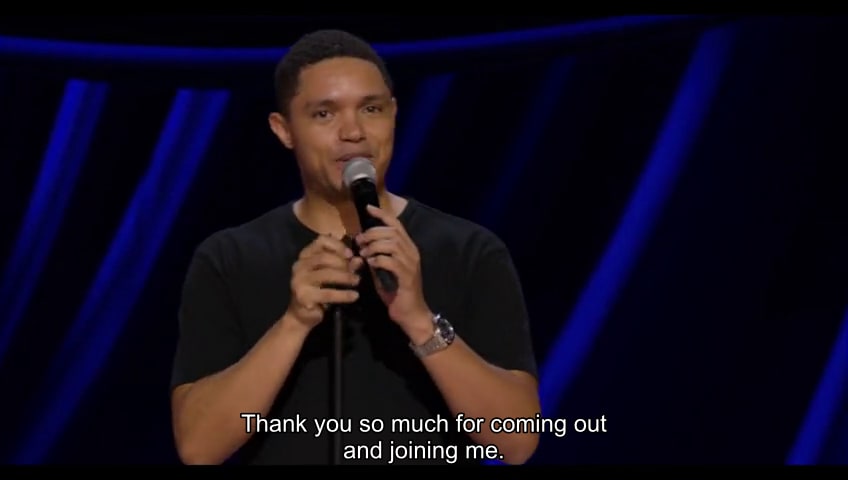 This has been a pretty long ride, hope you enjoyed it. As much as we did, not all of the array methods were covered in this article for the sake of length and the case of too-much-information-ritis . Some important ones left out were

Thank you for reading, your time invested is appreciated. Please leave a message if you found this article helpful or you have more to contribute.

Once suspended, keemosty will not be able to comment or publish posts until their suspension is removed.

Once unsuspended, keemosty will be able to comment and publish posts again.

Once unpublished, all posts by keemosty will become hidden and only accessible to themselves.

If keemosty is not suspended, they can still re-publish their posts from their dashboard.

Once unpublished, this post will become invisible to the public and only accessible to Hakeem Abdul.

Thanks for keeping DEV Community 👩‍💻👨‍💻 safe. Here is what you can do to flag keemosty:

Unflagging keemosty will restore default visibility to their posts.