In the previous post, I created basic CI/CD pipeline. In this article, I enhance the pipeline by using multi stage, multi environment.

When I work on projects, I usually use multiple environment such as dev, UAT and production. Azure DevOps support Environment concept and it's integrated as part of pipeline so that I can deploy the application to each environments and I can track the detail separately. See Environments for more detail.

Right now, I have one pipeline and one App Service. When I take a look the azure-pipelines.yml, I see the current environment is named after the App service name.

I will add two environment, dev and prod.

1. Go to Environments area in Pipelines, and click "New environment".

2. Enter "Dev" as its name and click "Create". Now you have Dev environment. Repeat the process to create "Prod" environment.

1. Go to Repo and open azure-pipelines.yml. Then replace the code with following. Update azureSubscription to match your subscription.

2. Save the file which commit the change and trigger the pipeline. Now pipeline run shows three stages. Build, Deploy to Dev and Deploy to Prod.

3. Once the pipeline finish running, go to Environments. I can see the deployment history to each environment separately.

Another reason to use environments is to implement approval process.
Azure DevOps supports not only manual approval but also other things such as creating policy or call Azure Functions.

3. Add user(s) who should approve. I just added myself and another friend for test but I usually add at least three people. When I add more than one approvers, I have a bit more settings how they should approve.

This time, I set minimum number of approves to one, and "allow approvers to approve their own runs" which I usually don't recommend.

4. Let's run the pipeline manually. Go to pipelines, select the pipeline, and click "Run Pipeline". As I have approval setup, it should pause before "Deploy to Prod" stage.

6. After I approve, the pipeline continues to the next stage.

Not directly related to the pipeline enhancement, but it's important to define the development workflow. Following are some best practices.

Azure DevOps has branch policies feature to apply these rules for branches. 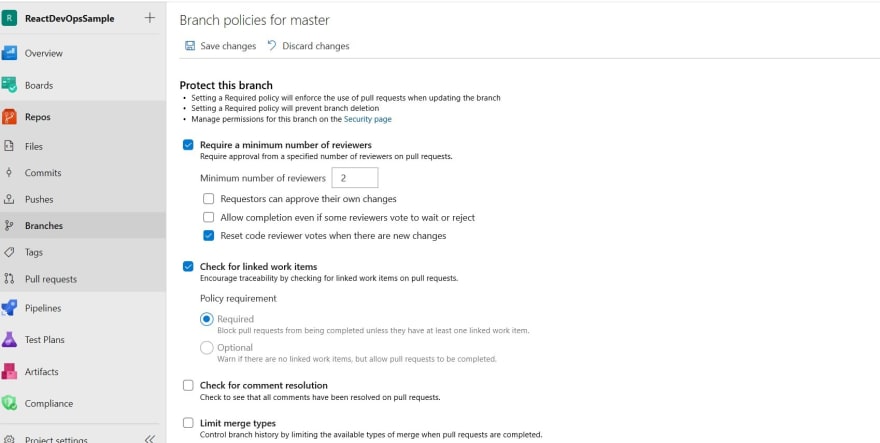 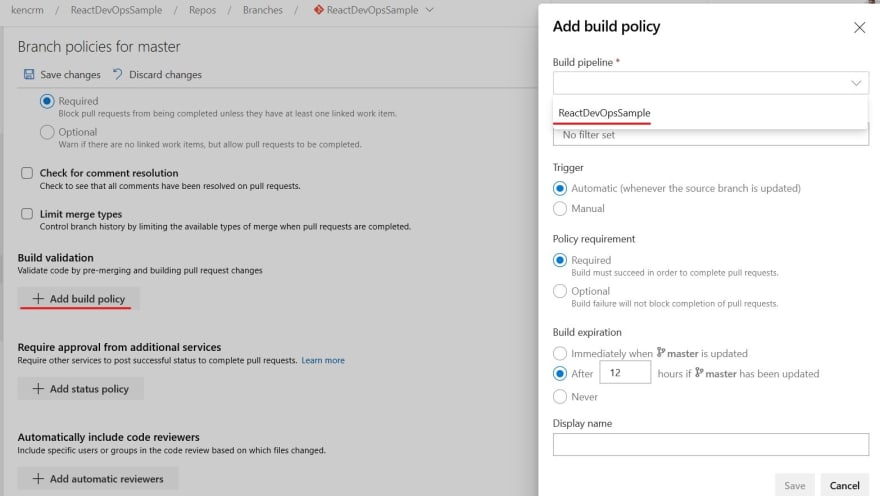 There are several triggers to run pipeline which you want to know.

In this article, I enhanced the pipeline by adding environments and approvals, which are still very basic concepts for DevOps. In the next article, I add more components by using new features to the react application and try another test framework.

Go to next article