How are the tutorials been coming along? I believe by now you can handle a whole project by yourself. In my previous tutorial, we discussed Docker, Node, and Vue https://dev.to/kevin_odongo35/docker-node-and-vue-5e74.

In today's tutorial, we want to go further and discuss the production approach. In production, you wouldn't want to use the Mongo DB container or Redis container. Things will begin to change while going to production. My previous article will get you up and running during Development.

For production, the approach will change. Below was the stack we were working with:

In production, we can use MongoDB Atlas https://www.mongodb.com/cloud/atlas and AWS ElastiCache (Redis or Memcached) https://aws.amazon.com/elasticache/. In essence, we just have to change the environment file which holds the URLs for Redis and MongoDB. Rebuild the image and push it to the Docker hub or AWS ECR.

Practical learning is always the best. The first step is to learn how to push your image to Docker Hub and AWS ECR.

With Amazon Elastic Container Registry, there are no upfront fees or commitments. You pay only for the amount of data you store in your public or private repositories and data transferred to the Internet. As part of the AWS Free Tier, new Amazon ECR customers get 500 MB-month of storage for one year for your private repositories. As a new or existing customer, Amazon ECR offers you 50 GB-month of always-free storage for your public repositories. Read more about ECR pricing https://aws.amazon.com/ecr/pricing/.

Docker Hub charges between 0 USD to 7 USD. For public images generally, it is free for all subscriptions. Read more about Docker Hub pricing https://aws.amazon.com/ecr/pricing/.

For production you wouldn't want your images to be public

We are going to have two Dockerfiles one for development and the other for production.

In Dockerfile.dev paste the following:

In Dockerfile paste the following:

In Docker-compose.yml paste the following:

In the Docker-compose.yml file below we are only building our development dockerfile.

In your .dockerignore file copy all the contents in .gitignore

Here is our application structure. 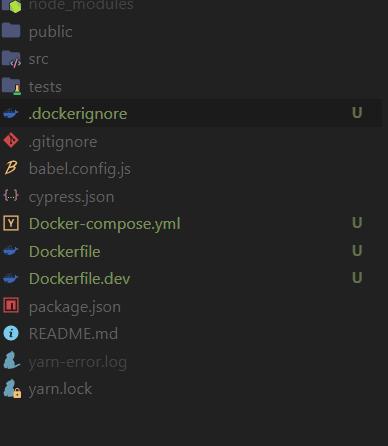 During development, all you have to do is run the following command.

Once the application is running open a new terminal and run the following command to run all your tests.

To shut down all containers, use the following command.

When done with the development stage build your image for production. You can do this using the Docker-compose by changing the Dockerfile.dev to Dockerfile or running the command below.

Now that we have an image of our application next step is to push it to Docker Hub or AWS ECR.

To push our image to Docker Hub log in https://hub.docker.com/

To push an image to Docker Hub, you must first name your local image using your Docker Hub username and the repository name that you created through Docker Hub on the web.

To rename an image run the following command

That is all we have to do to push your image to the Docker Hub. To test your image go to Docker playground https://www.docker.com/play-with-docker

That is all we have to do to push the image to AWS ECR.

In the first tutorial, we learned how to simplify learning Docker using two files. Just understand the following files Docker-compose.yml and Dockerfile. The rest of the commands will fall in place as you go along. In the real world, we can not master all commands but once we know what we want we can always reference Docker documentation.

Today we have gone a step further in knowing how to upload our images to Docker Hub and AWS ECR. We have also learned how to structure our Dockerfiles and Docker-compose. I have used a Vue project but the logic is the same with any project. 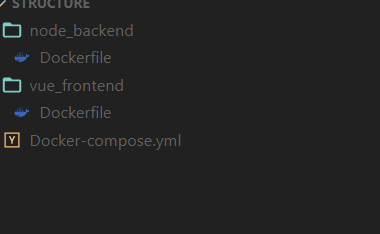 At this stage assume all your images have been uploaded to Docker Hub or AWS ECR. Our next move will be deploying our application. Once the application is deployed we will need to manage all the containers deployed. How do we go about this?

This is where Kubernetes/AWS EKS and AWS ECS come along. They will assist us in managing our containers. In our next tutorial, we will deconstruct Kubernetes, AWS EKS, and AWS ECS.

What about AWS Fargate?

AWS Fargate is a serverless compute engine for containers that work with both Amazon Elastic Container Service (ECS) and Amazon Elastic Kubernetes Service (EKS). Fargate makes it easy for you to focus on building your applications

The server-less world of Container!!!!

Have a good week ahead of you and see you in the next tutorial.

A Brief History of JavaScript