The testing library is a family of packages that help you test UI components in a user-centric way.

The more your test resembles the way your software is used, the more confidence they can give you.

What problems does Testing Library solve?

So why pick Testing Library?

DOM Testing Library works with any environment that provides DOM APIs such as Jest, Mocha + JSDOM or a real browser.

What this library is not :(

What should you avoid with Testing Library?

for the sake of this write up, I'll introduce React Testing Library

CRA projects have out-of-the-box support for RTL.
You can also install it via npm or yarn

Why do tests with React Testing Library?

Before we continue, lets understand the different types of tests that there are.

To better understand tests, we need to know what goes into a test; describe blocks, test blocks, and assertions.

If you're using create-react-app, React Testing Library and Jest come installed out-of-the-box. However if you're using another react framework or you've built your app with custom react and webpack configuration, you'll need to install jest and react testing library yourself.

Under the hood, jest test-runner will match all files with suffix test.js or spec.js or as per your own configuration.Jest then runs the tests in these files once you run the command npm run test or yarn test (again, or whatever test script you may have in your package.json)

Like I mentioned earlier, Jest is a test-runner, which gives you ability to run tests with Jest in the command line. On the other hand React Testing Library is a testing library to test react components, just like Enzyme.

While Jest provides us with a whole lot of functions; test suites, test cases and assertions, RTL provides more functionality that is geared towards DOM testing for react components e.g render, screen, query methods, assertion methods, and many more.

To better understand this, lets use some of my code and see a real-life example. 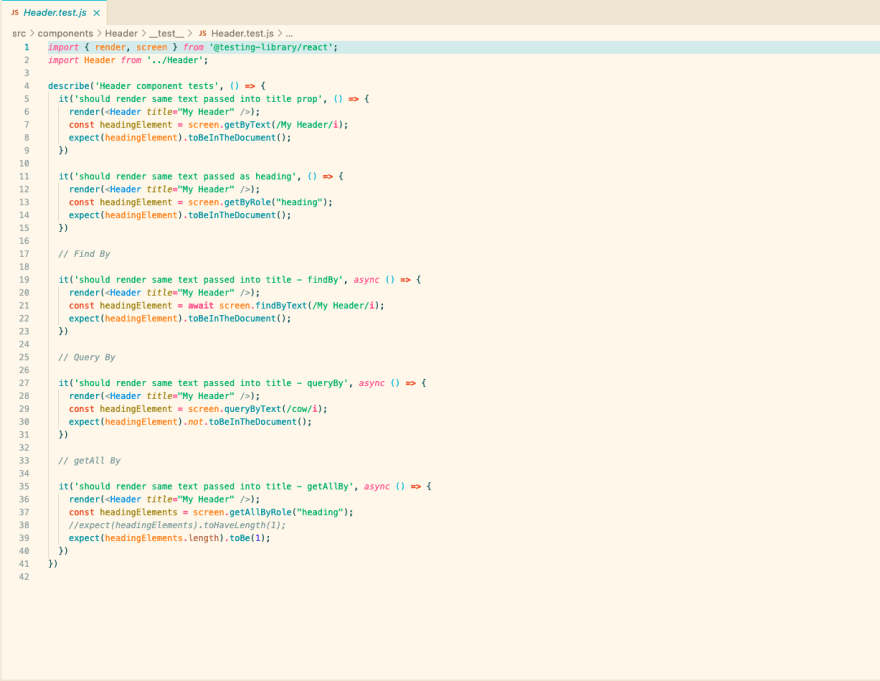 Lets dive into the above test suite;

okay now, lets look at some of those Query methods I mentioned earlier, some of which I have used in the figure above

getBy, findBy, and queryBy - these methods get only one element. If they get more than one element, they throw an error.

getAllBy, findAllBy, and queryAllBy - Always return an array if they get multiple elements they return all elements.

findBy, findAllBy - we can use these methods if we are rendering items asynchronously.

queryBy - does not work with async, returns only one element and if no match it still passes.

In react-testing library, we want to mimic the user interactions as much as possible inside of our tests.

Semantic Queries attributes - these are for when we have implemented certain a11y accessibility rules - getByAltText, getByTitle

Using TestID - in react sometimes we may need to test a specific component that has a unique testId. in such instances we use getByTestId.

This is already getting too long. I'll stop it here for now. I'll attach some links to certain articles that helped me prepare and improve my testing skills.

That's all for now, till next time, have a great time testing your applications. One more thing before I go, here's a sample implementation of how I use Testing Library with react-native. 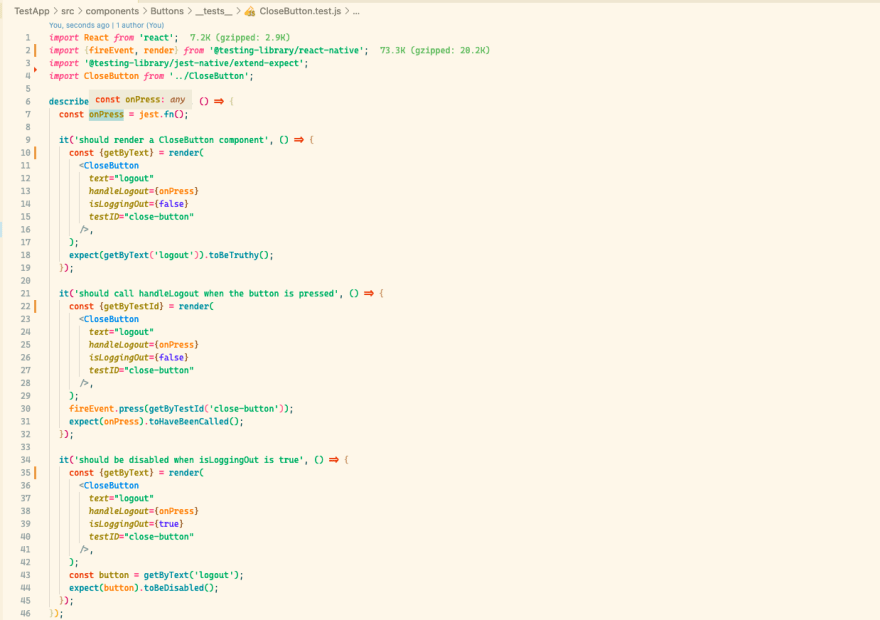 Javascript to know for Reactjs

Once suspended, kharioki will not be able to comment or publish posts until their suspension is removed.

Once unsuspended, kharioki will be able to comment and publish posts again.

Once unpublished, all posts by kharioki will become hidden and only accessible to themselves.

If kharioki is not suspended, they can still re-publish their posts from their dashboard.

Once unpublished, this post will become invisible to the public and only accessible to Tony Kharioki.

Thanks for keeping DEV Community safe. Here is what you can do to flag kharioki:

Unflagging kharioki will restore default visibility to their posts.