Before I started drafting pull requests, I used to draft press releases. My public relations background comes in handy in my DevRel role today, and it helps me keep learning, too. I’m a community-taught developer, picking up a lot of my technical skills from people I meet in communities like Girl Geek Dinner, the CS department at CCSF, and, of course, DEV.

Today, I’m lucky and grateful to also learn on the job, from colleagues patient enough to teach me best practices. In the spirit of Laurie’s tweet, I’m going to try to do a better job of sharing what they teach me.

When someone teaches you something in private, document it in public.

It’s a one two punch of cementing your understanding and giving back to a larger group.

Knowledge exchange is a multiplier.

This post is my first pass at that! Read on to learn how I learned to be less afraid of spooky JavaScript Promises, to avoid implied global variables, and to get better at bridging the gap between what I know and what my colleagues can teach me.

When I built a Halloween themed video call demo to prank the team, in addition to setting up the video call elements my main run() function needed to retrieve a list of gifs from the Giphy API, and then to plop a random gif on the page.

Here’s the original code I wrote to do that:

While this code worked, you might’ve noticed the same thing Phil did:

If you’re at a similar spot in your programming journey to where I was before I wrote this post, your first thought reading his comment might’ve been, "Oh! I just need to store the return value of getGifs inside a variable."

This first attempt led to bad news bears, or, a lot of pending Promises in my spooky.html: 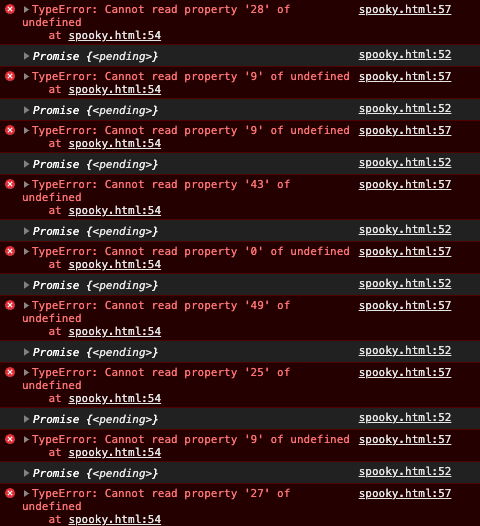 Oh no. Promises. They’re on almost every interview questions list, but I somehow got this job even though I’m still a bit scared seeing these errors, what am I even doing?!?

Better stop that narrative and take a breath. And then take a Google.

There are loads of fantastic articles about JavaScript Promises and async/await out there. The part I needed to understand to fix my code, the part that Phil helped surface from the noise, is that the async/await pattern is syntactic sugar on top of Promises.

While I got the async part of the pattern ahead of my async function run(), I forgot the await. Await, well, tells a function to wait on the next step until a Promise resolves. I saw all those {<pending>} Promises because await was missing.

With that fixed, I could focus on specifying return values and replacing implied global variables.

It’s helpful for me to trace back every step a function makes, so I went back to my getGifs() function:

It’s not just my run() function, that was missing variable declarations. gifs = await response.json() in getGifs() is missing one too.

When I called getGifs() in run(), I was telling the function to create a side effect and change the state of a global variable on the window object. If someone else wrote gifs = somewhere else, that could override the values I actually wanted.

See what I mean in this codepen.

"Color circles" fills the initial circle colors. Since we didn’t scope the colors as variables within the colorCircles() function, they became global variables on the window object. That means we can "accidentally" override() them in the next function, and reset() them too.

While that side effect works for the purposes of an example codepen, keeping track of the colors as they get swapped is still hard enough to follow. It's like Elle Woods said:

Consequences of implied globals can be greater in larger applications, or even when it comes to picking gifs to prank your colleagues.

In the final code, I’m using the actual response object from my call to getGifs(). Now, if I want, I can reuse the function in other places, pass in specific search parameters, and use multiple instances of the return object instead of just one globally. Best of all, the state outside of the object won’t get accidentally mutated.

After this code review, I know a bit more about how async/await works and principles of good functional programming. Beyond that, I also learned:

Let me know what things you’re excited about building over @kimeejohnson, and especially let me know if you’ll be building something with video chat.