All last week I was refactoring my Go projects. And realized that I was using the same tools to check code quality and safety everywhere. Yes, this should be done from time to time to keep the code base clean and orderly (this applies not only to programming, but in general in life).

🚀 By the way, this article is not about the built-in linters and formatters in the Go plugin for VS Code or similar! These will be different projects from various authors, that you can add to your programming cycle.

So, why not tell my readers about helpful tools? Let's go! 👇

Why it is important and my vision for Go projects

I have to tell you: I love writing code. But more than that, I like reading structured code from other developers.

Why? It helps to better understand the author, adopt useful techniques and methods, as well as, just to understand the work of a particular function and the package as a whole!

For this reason, I am meticulous about tools to make it easier to write code and, as a consequence, to read it afterwards. I encourage you to be careful and use the tips and tools I describe in this article, too… someone is still reading the code you've written.

Setting up the environment correctly

First, the default .editorconfig for all of my Go projects, looks like this:

The second, but just as important as the first, always updated Go plugin for Visual Studio Code (which I mentioned above) with default settings.

The gosec inspects source code for security problems by scanning the Go AST. This package contains over 30 different rules to test the security of your Go code.

Here's an example from one of my projects. I call the command gosec ./... in the root directory of my module:

And this give me a lot of information to fix it! You can easily fix this part of the code by wrapping the pathToFile variable with the filepath.Clean() function built into Golang.

🤔 Note: Yes, it may seem strange at first glance, but if you've ever run Go projects in production, you'll understand why you can't leave such things out of your code.

The go-critic is a collection of checks that detect style, performance issues as well as some common programming errors. It provides as much useful checks as possible. This wonderful tool not only shows you the problematic part of your Go code, but also tells you what to replace it with.

The most opinionated Go source code linter for code audit.

If there is a rule group you don't need at the moment, just disable it via a disable flag with tag like this:

And tags which disabled by default (enable it by the -enable='<TAG>' flag with specific tag, or use -enableAll flag):

For turn off a specific rule, just run this command:

☝️ Note: You can find a complete list of all the rules here.

The golangci-lint is a fast Go linters runner. Most installations of this package performed for CI, but you can use it, for example, as a standard linter in your favorite IDE.

And yes, personally, I often use it with GitHub Actions to check all incoming PRs for projects in the repositories.

📌 Note: If you missed it, here's my series of articles that will give you insight and practice with GitHub Actions.

The config file for Actions looks like this, for example:

A small demo from the developers of golangci-lint that shows the problematic areas of the Beego web framework (by golangci-lint run command): 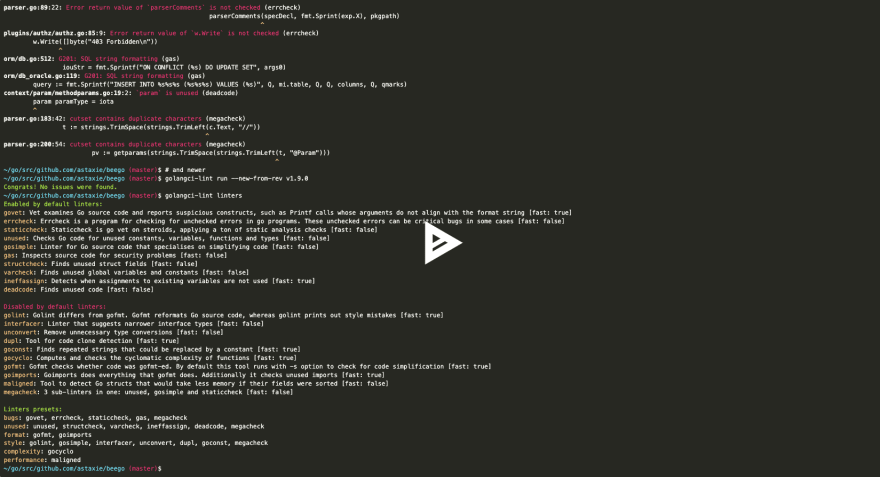 I hope that this article has helped you. Write in the comments if you have any other good tools for checking and formatting code. And be never afraid to take a little time to make your code great again.

Photos and videos by

How To Place Text Behind An Image In Photoshop?

Once unpublished, this post will become invisible to the public and only accessible to Vic Shóstak.

Thanks for keeping DEV Community 👩‍💻👨‍💻 safe. Here is what you can do to flag koddr:

Unflagging koddr will restore default visibility to their posts.