Docker is widely used these days, but if you have not got any chance to work on it, then its high time to get familiar with it. This post is not going to be a tutorial about docker though, so it assumes that you have its basic understanding. If you know docker, you must know that to build a docker image, you need to create Dockerfile with several instructions in it. In this post, I am going to talk about two of those instructions: CMD and ENTRYPOINT which can be a bit confusing if you haven’t paid much attention to it.

Both of these docker instructions are used to define command/executables which is executed during container invocation. These are very similar but different instructions which can be used independently or together to achieve better flexibility to define what a container should execute. There are two ways/syntaxes to define them:

Used to provide all the default scenarios which can be overridden.

Cmd instruction is used to define:

This instructions is used to define a default executable for a container to execute. If you want to create a generic docker image, where users can pass any supported command to be executed on container invocation, then this instruction is the one to use. Entrypoint instruction should not be defined in Dockerfile for this use case.
CMD [“executable”, “arg1”, “arg2”]

P.S: Anything defined in CMD can be overridden by passing arguments in docker run command.

Used to define specific executable and arguments to be executed during container invocation which cannot be overridden. This is used to constraint the user to execute anything else. User can however define arguments to be passed in the executable by adding them in the docker run command.
ENTRYPOINT [“executable”, “arg1”, “arg2”]

For the demo, let's take the following dockerFile which fetches necessary cowsay and screenfetch libraries so that we can run these commands when running the container.

Demo 1 - Use of CMD to define Default executable

This will run the default executable specified in CMD instruction and output following.

However, you can override this executable, when running the container as
docker run demo screenfetch -E which will output 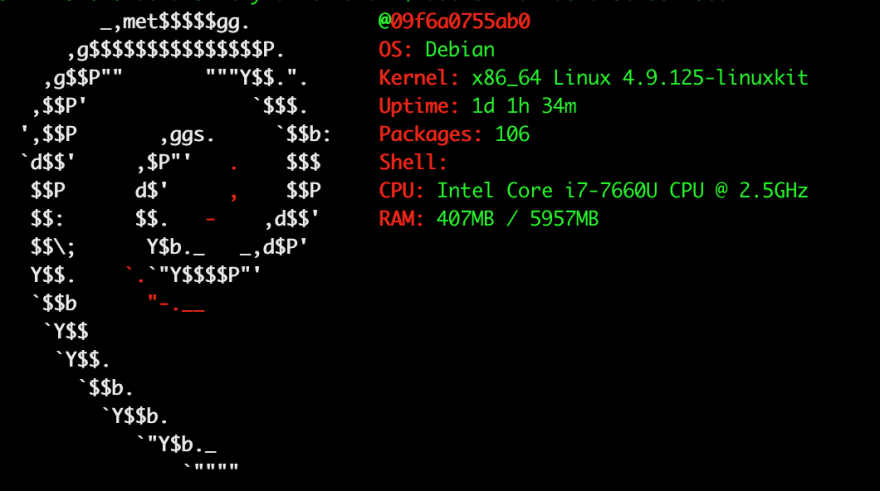 Demo 2 - Use of ENTRYPOINT

If you want to restrict users from passing any other executable, you can specify 'ENTRYPOINT' instruction as :

Build the image again and run this container as:
docker run demo

This will run the executable specified in ENTRYPOINT and output following.

As expected, the arguments passed in the docker run command, is appended in the executable and argument, set in the entryPoint instruction.

Demo 3 - Use of ENTRYPOINT and CMD together

If Entrypoint is defined, anything defined in CMD will be taken as arguments for the executable defined in Entrypoint.

Building the image from above docker file and running the container with docker run demo will output:

As you now know, the argument defined in CMD can easily be overridden by passing other arguments in docker run command, if you execute docker run demo Overriding arg passed in cmd, It will output:

Once suspended, lasatadevi will not be able to comment or publish posts until their suspension is removed.

Once unsuspended, lasatadevi will be able to comment and publish posts again.

Once unpublished, all posts by lasatadevi will become hidden and only accessible to themselves.

If lasatadevi is not suspended, they can still re-publish their posts from their dashboard.

Once unpublished, this post will become invisible to the public and only accessible to Navee.

Thanks for keeping DEV Community 👩‍💻👨‍💻 safe. Here is what you can do to flag lasatadevi:

Unflagging lasatadevi will restore default visibility to their posts.