This topic has the potential to be a touchy one for marketing departments and designers. There have been plenty of approved designs I have received, just to find their new branding's color scheme is not accessible. Sometimes our clients or organizations fall in love with their new brand and design, and asking them to change on the branding or the design is actually like asking them to change the new identity they just fell in love with. The ironic part is there are usually accessibility requirements on the clients' SOW, but the designers didn't know that their colors were inaccessible.

We can get a little more nitty gritty here, and we will. However, from both a technical and non-technical perspective there is one major rule of thumb when talking about color: do not depend on color to communicate meaning.

There are plenty of technical things I could talk about here, but let's talk about color and meaning in regards to Football, the all-American sport. Back in 2015, there was a "Color Rush" campaign for the NFL. The campaign was to celebrate the 50th anniversary of the league's first-ever game shown in color. Seems pretty fun right?

Then came the Jets-Bills game, which was a nightmare for the 13 million (at time of the report) Americans who suffer from Red/Green colorblindness.

Ultimately, your design may look spectacular to you, but it may be painfully frustrating for your users. Particularly if you're using color to determine meaning.

According to the National Institute of Health, National Eye Institute, as many as 8 percent of men and 0.5 percent of women with Northern European ancestry have the common form of red-green color blindness. However, color contrast isn't important only for those that suffer from colorblindness. This can also impact people with aging and/or sleepy eyes or even people trying to read a site on a mobile device outside in the sun.

As my vision declines, there is not one single day that goes by that I don't curse asshole web-designers who use grey type.

The above tweet makes me laugh, mostly because I am relatively young (29), with 20/20 vision and only wear glasses at the computer to reduce eye strain. I have missed links that were gray on gray before.

So what is the proper contrast? Proper contrast is 3:1 for large text and 4.5:1 for smaller text. When I first saw these evaluations, I thought to myself: What the heck does small or large mean, that's subjective!? Well, they do actually define it. Large text is anything larger than 14 point (typically 18.66px) and bold or larger, or 18 point (typically 24px) or larger. Anything smaller is... small text.

How to start evaluating your brand

While I am not a designer and don't have the same workflows as a designer might, I worked with designer Raquel Breternitz on this color scheme and my logo. It worked really well for us and I wanted to share how we worked together to create an accessible design.

Of course, because my blog was going to be about accessibility, I was very adamant and clear about those requirements, which may not be the case for many clients. However, Raquel would ask what I presume to be normal questions about my brand, what my message is, what are elements of my brand and personality I'd like to emphasize, etc. We also had a Pinterest board where we would brainstorm about color schemes and I would pick the ones I liked the best. I don't know much about how designers work with clients, but I suspect that this is the overall theme, although maybe the Pinterest board is more for individuals vs organizations. 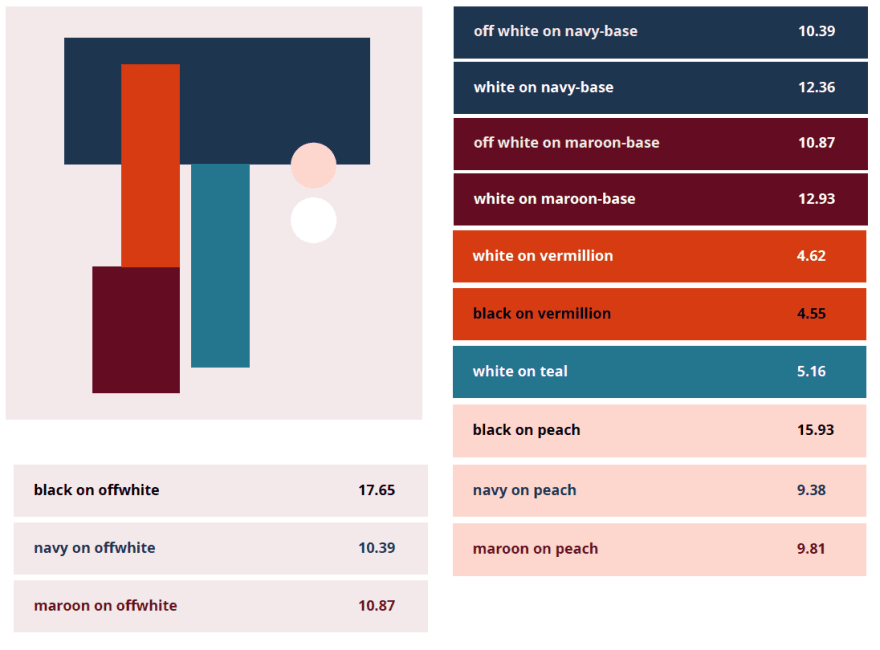 Once I picked my favorite color schemes, she went above and beyond when she sent me deliverables. She gave me about 5 - 6 colors and would use a variety of them together with text and background. For each one, she would tell me what the color contrast of that combination was. It gave me a lot of confidence that all the colors I was using was at proper contrast and I was using colors appropriately. If you'd like to take a look at some of the samples that we went through, you can download the color schemes. Disclaimer: the source/inspiration photos in the color scheme PDFs were taken off Pinterest.

How to convince a client to change their brand

Oftentimes, we as developers don't get to directly work with the designers of our projects. I've been in a lot of scenarios where I was siloed away from a designer and unable to give them feedback or flag concerns I had. I was just plopped a design and was told to make it happen.

How does one approach the conversation when you receive inaccessible color contrast? I'm not going to lie to you, this part I still struggle with and it certainly isn't easy. We don't want to insult the designer or act like they ignored SOW requirements. In both personal and professional settings, blaming others is usually a no-no. I'd like to think that flaws with accessible design are usually unintentional. However, sometimes a designer did build an accessible design, but the client requests something inaccessible and ignores me when the designer or the developer flag the contrast issues.

When I have an instance where a client minimizes contrast, there are several things I do. First, if there are requirements in their SOW, I have a leg up to tell them that it's part of our requirements and that there are legal and business incentives to keep those requirements. Regardless of whether they have accessibility in their SOW, I explain what that means to the end user, instead of using jargon like "WCAG 2.0" or "Section 508 compliance." Even in the Federal Government, using jargon doesn't really help your client understand what that means to their end users.

In the case of color contrast, it would depend on the audience. I really like to use the football example above if I am speaking with an audience that loves that sport. At a minimum, they can understand how frustrating it could be if you couldn't understand which team got a touchdown, which team fumbled, who intercepted whom. If you relate it to the web, I usually like to explain it to them by saying that we want to make sure that people can distinguish items regardless of their ability.

I plan on writing more about color because I personally find the science of visual perception fascinating. I hope this is a great start. Feel free to reach out to me on Twitter if you have questions.

Once suspended, lkopacz will not be able to comment or publish posts until their suspension is removed.

Once unsuspended, lkopacz will be able to comment and publish posts again.

Once unpublished, all posts by lkopacz will become hidden and only accessible to themselves.

If lkopacz is not suspended, they can still re-publish their posts from their dashboard.

Once unpublished, this post will become invisible to the public and only accessible to Lindsey Kopacz.

Thanks for keeping DEV Community 👩‍💻👨‍💻 safe. Here is what you can do to flag lkopacz:

Unflagging lkopacz will restore default visibility to their posts.