React Hooks provide us with access to core React functionalities within the context of function components. Traditionally, to optimize React, developers have had to switch between function and class components, however, React Hooks allow us to use function components throughout projects to build both small and large applications.

If you’re a React developer who likes to write function components over class components, then this article is for you; we’ll look at three helpful yet somewhat underrated React Hooks that you might not be so familiar with, useImperativeHandle, useLayoutEffect, and useDebugValue. We’ll explore their use cases, syntax, and a few code examples. Let’s get started!

In React, data is passed from parent to child components via props, known as unidirectional data flow. The parent component cannot directly call a function defined in the child component or reach down to grab a value for itself.

When you need a bidirectional data and logic flow, but you don’t want to overcomplicate things by introducing state management libraries, the useImperativeHandle Hook is a great choice.

For example, I once used the useImperativeHandle Hook when I needed to open a modal component when a button in the parent component was clicked.

Consider the code below:

We also defined a handleOpenModal function, which returns the openModal function passed up from the child component with childRef.current.openModal(value). The function is then called when the button is clicked.

The child component should look like the code below:

Like the useEffect Hook, the useLayoutEffect Hook lets you perform side effects like API calls, setting up subscriptions, and manually manipulating the DOM in a function component.

Therefore, the browser cannot paint any browser updates until useLayoutEffect runs. For this reason, you’ll mostly use useEffect, which shows your users something like a loader in the browser while the side effects are being run.

However, there are a few situations where we want to run the side effect and update the DOM before showing our users the updates. We can do so using useLayoutEffect with the following syntax.

Consider the code below:

Above, we have a side effect that updates state with a random number and includes a button to reset state to 0. If we run the code above with the useEffect Hook, you’ll notice a flickering effect as the number changes from 0 to the next random number when the reset button is clicked.

Now, change useEffect to useLayoutEffect and click the button again. The transition to the next random number is smoother.

You can experiment with the code to learn more.

Once, when I was developing a static website for a client, I used the useEffect Hook and React Router DOM for routing. However, I noticed that the window scroll position of the page didn’t move to the top when navigating between the different pages, instead, scrolling began from where it was on the previous page, which is not an uncommon occurrence with React Router DOM.

We can solve this problem with useLayoutEffect as follows:

Basically, we tell the browser to take a user to the top of the page before showing them any content. With useLayoutEffect, we can make that process seamless.

There are several other practical applications of the useLayoutEffect Hook. After all DOM mutations, useLayoutEffect fires synchronously; therefore, it can be used to read and change the layout in the DOM, from getting the scroll position or other styles for an element to adding animations at a particular scroll position. Be careful though, your user won’t see anything until this Hook is run and another DOM update is made.

Unlike the other Hooks we’ve covered, which are used to improve the user experience, useDebugValue improves the developer experience, helping developers log information in React DevTools in an easier format. Note that the useDebugValue Hook should only be used in combination with a custom React Hook.

If you’re familiar with React DevTools, then you know that whenever a built-in React Hook like useState or useRef is used in a custom Hook, it will debug its respective values within React DevTools.

For example, consider the custom Hook below:

Let's call the custom Hook in App.js and inspect DevTools:

Inspecting React DevTools, we see that the value for useState is already being logged for us. We have two states for name and address: 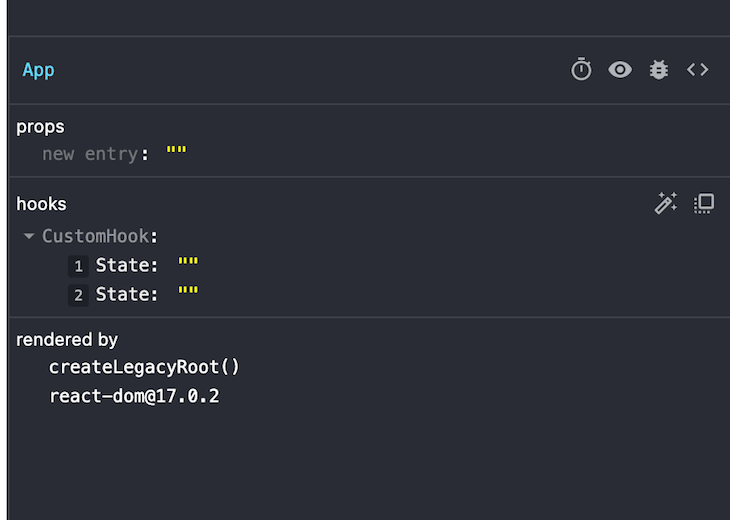 At this point, we don’t know which of the state values the empty strings belong to. If we were building a simple custom Hook, we could easily run back to the code to see that name comes first, so it should be the first state in DevTools.

However, if we were building a complex custom Hook to use in various components, we would need a way to track which values belong to which states while debugging. To do so, we can use useDebugValue to display a label for values in our custom Hooks in React DevTools.

See the updated custom Hook below:

The updated DevTools is as follows: 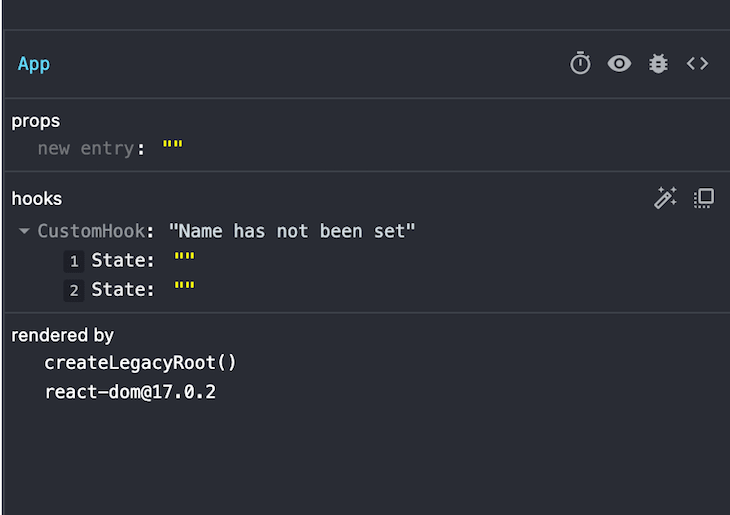 We are able to monitor the value of name as its state changes, using useDebugValue so we don't have to guess what its value is. useDebugValue is helpful when the Hook’s state is not immediately obvious from looking at the values in DevTools.

useDebugValue takes an optional second parameter, a formatting function. Let's say the value you are receiving needs to be formatted before it is readable, like parsing JSON data or formatting a date. The function takes in the debug value and returns a formatted value, however, it only runs when DevTools are open and the value is being inspected.

In this tutorial, we covered three React Hooks that we don't need most of the time but can make our lives easier when we face certain edge cases.

The useImperativeHandleHook allows us to expose a value, state, or function inside a child component to the parent component. TheuseLayoutEffect lets us perform side effects like API calls, setting up subscriptions, and manually manipulating the DOM in a function component. Lastly, the useDebugValue Hook makes it easier for developers to log information in React DevTools.

Now, you should be familiar with these special React Hooks and know how to use them when you find yourself in one of these situations. I hope you find this article helpful!

Modernize how you debug your React apps — start monitoring for free