On the other hand talking about future scenarios, especially if we talk about superintelligence, turns out difficult. But there are some scenarios we can think and evaluate about.

Artificial Intelligence is a term, which consists of two words.

Intelligence is are very complex term. It can be defined in many different ways like logic, understanding, self-awareness, learning, emotional knowledge, planning, creativity and of course problem solving.

We call us, humans, intelligent, because we all do this mentioned things. We perceive our environment, learn from it and take action based on what we discovered.

The same applies to animals. The interesting point about intelligence on animals is, that there are many different species and because of that we can compare intelligence on between species.

History and Milestone of Artificial Intelligence

The history of Artificial Intelligence is quite interesting and started around 100 years ago.

In 1920 the Czech writer Karel Čapek published a science fiction play named Rossumovi Univerzální Roboti (Rossum’s Universal Robots), also better known as R.U.R. The play introduced the word robot. R.U.R. deals about a factory, which creates artificial people named as robots. They differentiate from today’s term of robot. In R.U.R. robots are living creatures, who are more similar to the term of clones. The robots in R.U.R. first worked for the humans, but then there comes are robot rebellion which leads to the extinction of the human race. 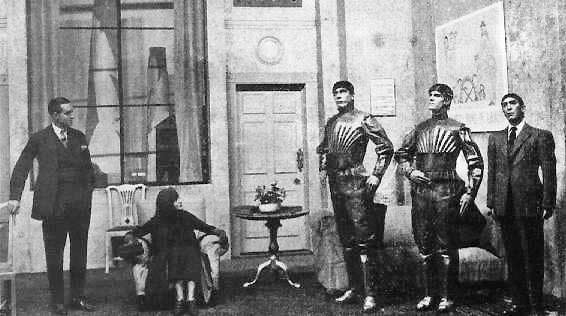 The play is quite interesting, because of different reason. First it is introducing the term robot, even if represents not exactly the modern idea of robots. Next it is also telling the story of the creation of robots, so some kind of artificial intelligence, which first seems to be a positive effect to the humans, but later on the is the robot rebellion which threat the whole human race.

Alan Turing was born on 23th June 1912 in London. He is widely known, because the encrypted the code of the enigma, which were used from Nazi Germany to communicate. Alan Turing’s study also led to his theory of computation, which deals about how efficient problems can be solved. His presented his idea in the model of the Turing machine, which is today still a popular term in Computer Science. The Turing machine is an abstract machine, which can ,despite the model’s simplicity, construct any algorithm’s logic. Because of discoveries in neurology, information theory and cybernetics in the same time researches and with them Alan Turing created the idea that it is possible to build an electronic brain. 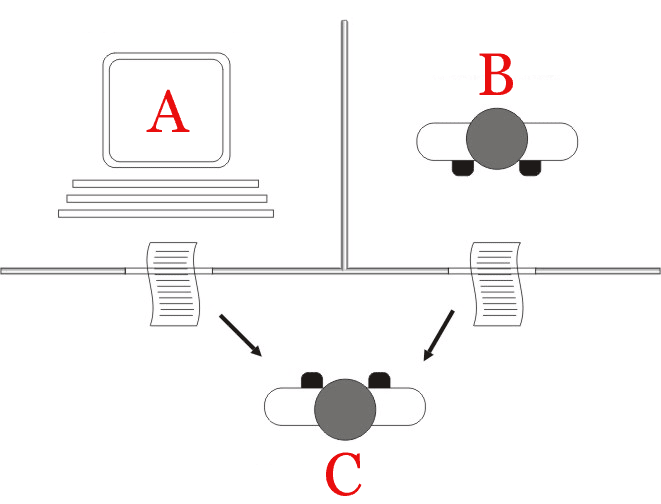 Some years after the end of World War 2, Turing introduced his widely known Turing Test, which was an attempt to define machines intelligent. The idea behind the test was that are machine (e.g. a computer) is then called intelligent, if a machine (A) and a person (B) communicate through natural language and a second person (C), a so-called elevator, can not detect which of the communicators (A or B) is the machine.

In 1956 there was probably the first workshop of Artificial Intelligence and with it the field of AI research was born. Researcher from Carnegie Mellon University (CMU), Massachusetts Institute of Technology (MIT) and employee from IBM met together and founded the AI research. In the following years they made huge process. Nearly everybody was very optimistic.

Machines will be capable, within twenty years, of doing any work what man can do.” – Herbert A. Simon (CMU)

That was in the 1960s. The progress slowed down in the following years. Because of the failing recognizing of the difficulty of the tasks promises were broken.

Because of the over optimistic settings and the not occurred breakthroughs U.S. and British government cut of exploratory research in AI. The following years were called (first) AI Winter. The enthusiasm was lost, nobody wanted to fund AI research. The interest of publicity on Artificial Intelligence decreased. This was around 1974.

After the first AI Winter, Artificial Intelligence came back in a form of so-called “expert systems”.

Expert systems are programs that answer question and solve problems in a specific domain. They emulate an expert in a specific branch and solve problems by rules. There are two types of engines in expert systems: First, there is the knowledge engine, which represents facts and rules about a specific topic. Second, there is the inference engine, which applies the rules and facts from the knowledge engine to new facts.

In 1981 an expert system named SID (Synthesis of Integral Design) designed 93% of the VAX 9000 CPU logic gates. The SID system was existing out of 1,000 hand-written-rules. The final design of the CPU took 3 hours to calculate and outperformed in many ways the human experts. As an example, the SID produced a faster 64-bit adder than the manually designed one. Also the bug per gate rate, which where around 1 bug per 200 gates from human experts, was much lower at around 1 bug per 20,000 gates at the final result of the SID system.

The second AI Winter came in the later 80s and early 90s after a series of financial setbacks. The fall of expert systems and hardware companies who suffered through desktop computers built by Apple and IBM led again to decreasing AI interest, on the one hand side from publicity and on the other side from investors. 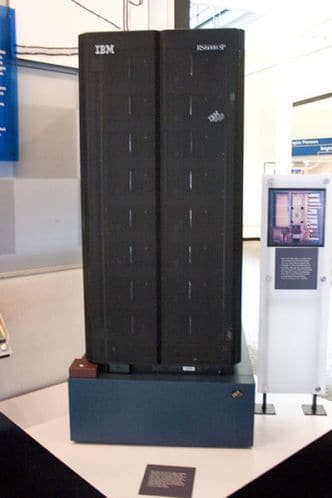 Deep Blue used tree search to calculate up to a maximum of 20 possible moves. It evaluated positions by a value function mainly written by hand, which was later optimized by analyzing thousand of games. Deep Blue also contained an opening and endgame library of many grandmaster games.

FLOPS stand for floating-point operations per second and the ‘G’ in GFLOPS stands for Giga. So the equivalent of 1 GFLOPS are 10⁹ FLOPS.

In the last two decades, Artificial intelligence grow heavily. The AI market (hardware and software) has reached $8 billion in 2017 and the research firm IDC (International Data Corporation) predicts that the market will be $47 billion by 2020.

This all is possible through Big data, faster computers and advancements in machine learning techniques in the last years.

With the usage of Neural Networks complicated tasks like video processing, text analysis and speech recognition can be tackled now and the solutions which are already existing will become better in the next years.

In 2013 DeepMind, one of the world’s foremost AI research, introduced an AI which could play a couple of Atari games on top of a level of human players. This first seems not very expressive, but they just used reinforcement learning and neural networks to let the AI self learn these games. Also they just used the pixels as an input to the agent, so there was no direct reward score given to the agent depending on the moves he did.

In 2015 they further introduced a smarter agent, who successfully played 49 classic Atari games by itself.

Next to classic games from old retro consoles DeepMind is developing an AI for more complex game, like e.g. Starcraft 2. Starcraft 2 is a Real Time Strategy (RTS) game, which is the most popular 1 vs.1 E-Sport title. Starcraft 2 is very popular in South Korea and the best Starcraft 2 pro player come from South Korea. Nevertheless there are many European and North American pro player who play for living. Starcraft 2 is a much more complex game than classic video games: There are much more possible actions you can do, you do not know everything about your opponent and you have to scout him to explore what he is doing. In Starcraft 2 there are also dozens of strategy decision to choose from every minute and in general much more to care about comparing to classic video games.

Next to classic Atari games, DeepMind also managed to defeat the world best human Go player with his AI AlphaGo. In October 2015 they first defeated the European Go champion Fan Hui five to zero. After the match there was a lot of skeptics in the Go scene about AlphaGo, because Fan Hui is ‘only’ an 2-dan (out of 9-dan, which is best) European Champion. Therefore the DeepMind team flew to South Korean to face Lee Sedol, a 9-dan Go Player. Lee Sedol is known as one of the best Go players in the world. After DeepMind managed to win the first 3 matches Lee Sedol seemed very desperate. But in the fourth game AlphaGo lost after it made an obvious mistake. In the last match AlphaGo could win again. In the end AlphaGo managed to win with 4-1 against Lee Sedol.

If you are more interested in the story about AlphaGo I recommend the movie about it. In my opinion the movie is great and shows, next to the technical impact of the AI, the impact on the Go community.

What is coming next?

Well nobody knows and I also do not know.

Superintelligence takes AGI to the next stage. superintelligence refers to an AGI, who is smarter than a human and can outperform a human in any intellectual task that a human being can.

The question, when there will be AGI and when there will be superintelligence, is of course difficult to answer (as nearly all answers who refers to future prediction). Nick Bostrom, who is a AI research on Oxford University, evaluates this question in a paper.

The AI takeover refers to the scenario, that a superintelligence will take over the world and will fight against the human race. It is a popular science fiction theme and it is started to use 100 years ago in R.U.R. and still being used in more modern movies like Terminator or Matrix. So is it only fiction or is it possible, that AI can take over the world one day?

I am not 100% sure about it. I favor more the opinion about that there will no AI takeover. But there are also many people like Elon Musk, Stephen Hawking and Bill Gates who are concerned about possible the possibilities of AI. Therefore I think we should not call AI takeover as a pure fiction scenario, we should be aware of it and act responsible.

Persistence is the key for success. I am passionate about Software Development. Books are my preferred source of knowledge. I like helping other people. I laugh all day.

Using ML Kit for Firebase to Tap into Beer Ratings

Lasse Schultebraucks
Persistence is the key for success. I am passionate about Software Development. Books are my preferred source of knowledge. I like helping other people. I laugh all day.
Show me your personal website/portfolio
#discuss #healthydebate #webdev
Minimizing Keystrokes, Maximizing Productivity  -  Bash Scripting
#bash #linux #beginners #productivity
What do you do within the first 30 minutes of starting your work day?
#discuss #productivity