In the software development process, when a system experiences a failure in runtime, it's natural for a developer to try to link that failure with who called that method and also which was the original request. This is where stack trace comes in, look at an example below:

with the information above we're able to know that a failure happened at CallChildActivity() method (line 22) which was called by the Main() method (line 11) both inside the Program.cs class. That's the reason why the runtime message tracking is essential for a software health and reliability, a rich information like that greatly increases the troubleshoot productivity. So the stack trace suits very well in terms of message trace when the subject is a single process application, like monolithic systems. On the other hand, when dealing with distributed systems like in a microservice architecture, the stack trace is not enough to expose the entire message tracking. That's the reason why distributed tracing tools and standards became necessary. The W3C defines a standard for this type of tracking, which is called Trace Context.

Imagine a system designed as a microservice architecture where two APIs communicate in a synchronous way (http calls) and the second API communicates with a worker by a message broker: 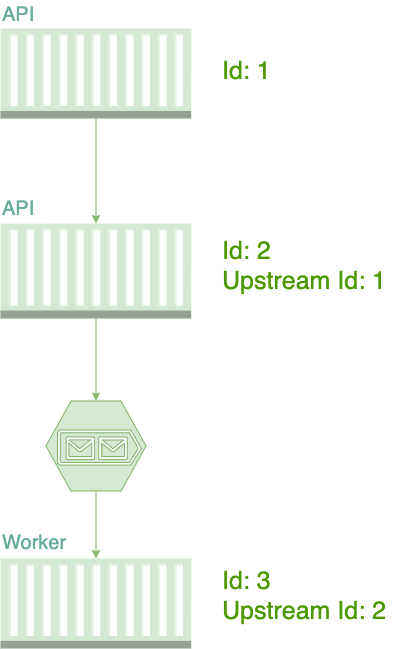 just like the stack trace, every Activity needs an Id to be identifiable and also needs to know the Activity Id of who called it. With the purpose of solving this kind of problem, some vendors came up delivering not only the distributed trace message information but also the application performance, the load time, the application's response time, and other stuff. That kind of vendor is called Application Performance Management tools (APM tools) or also trace systems, below are some examples:

NOTE: I chose to use the term vendor to describe all the trace systems because that's the way as the standard refers to them. But it seems that it'll be changed soon.

now imagine a scenario where there are many vendors and also many languages with different diagnostics libraries, some of them identify a trace with an operation-id, other calls it as request-id and also there is another one which recognizes it as a trace-id. Besides that, the id's format changes depending on vendor or diagnostic library: one is in the hierarchical format, another one is an UUID and there is also a 24 character string identifier. That scenario would result in: systems with different tracing vendors will not be able to correlate the traces and also will not be able to propagate traces as there is no unique identification that is forwarded. This is where trace context standard comes in.

The W3C Trace Context specification defines a standard to HTTP headers and formats to propagate the distributed tracing context information. It defines two fields that should be propagated in the http request's header throughout the trace flow. Take a look below at the standard definition of each field:

The traceparent field uses the Augmented Backus-Naur Form (ABNF) notation of RFC5234 and is composed by 4 sub-fields:

NOTE: sub-field term is unofficial, I chose this term for didactic purposes only

NOTE: all the fields are encoded as hexadecimal

Therefore, applying the trace context concept in an application like the Figure 1 will result in the diagram below: 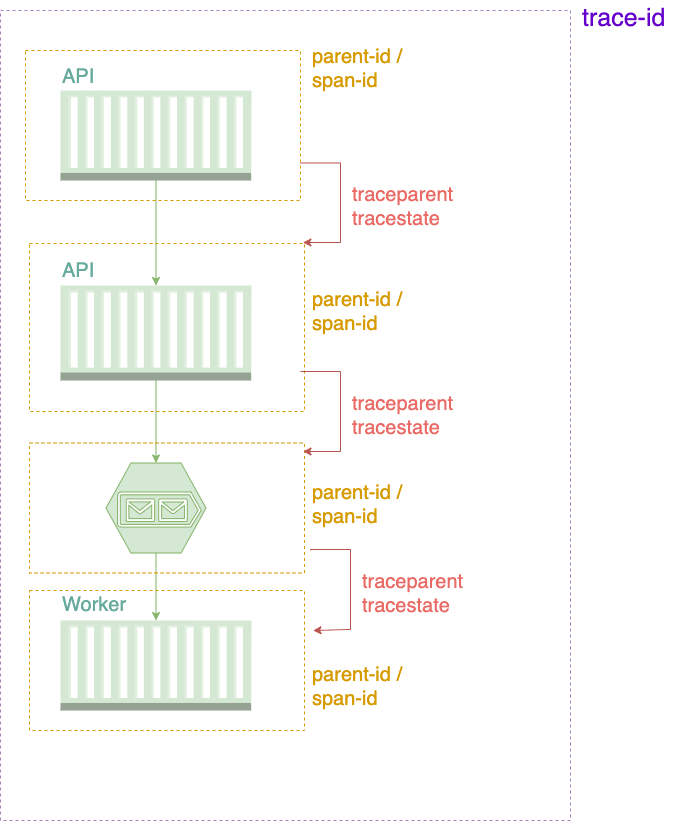 note that the trace-id is an identifier of all the trace, the parent-id identifies a delimited scope of the whole trace. Moreover, the traceparent along with the tracestate have been propagated throughout the trace flow.

To describe better the traceparent dynamics, take a look at the example below, wrote in c#, where two spans scopes are generated and the context is being propagated throughout them:

NOTE: the System.Diagnostics.Activity library in .net 5 has already been configured as the w3c standard

even though the example above shows a single process application, that's the pattern specified by the Trace Context standard. Basically, what that program is doing is: first it opens an upstream span scope and print the traceparent in the stdout, then it calls a downstream method which opens another span scope and also prints its traceparent and close the scope. After that, the upstream span scope was closed after all of it. The systems output follow below:

In some cases, parent-id could cause confusion due to its name, but that name is based on the vision of incoming requests. So one must think in the endpoint side, for example: imagine the message that had just arrived in the controller, the traceparent received in the header hasn't had his parent-id updated yet by the midleware, so in that vision the id inside traceparent is the upstream id or also the id of its parent.

There is a Working Draft (WD) document, the Trace Context Level 2, that has an response standard where the parent-id calls child-id.

NOTE: See w3c process for more information about the steps until a document become a w3c recomendation

The standard uses a fictitious example to describe what is tracestate for, I will reproduce it in this article. Imagine a client and server system that use different trace vendors, the first is called Congo and the second is called Rojo. A client traced in the Congo system adds in tracestate the vendor-specific id (with its specific format): tracestate: congo=t61rcWkgMzE. So the outbound HTTP request will be enriched with the headers below:

any other user-supplied information (different from vendor-specific info) should be added in the baggage field, that's another standard which is in Working Draft (WD) step of the w3c process (is not a w3c recomendation yet).

As displayed in Figure 2, in a microservice architecture, it's common to propagate messages throw a broker. For that kind of operation, there is another document that specifies the pattern (in case of using AMQP protocol), is the Trace Context: AMQP protocol.

The Trace Context: AMQP protocol is another example of document in the Working Draft (WD) step of the w3c process. That standard specifies the trace context fields placement in the message different from the HTTP standard.

The reason for the trace context fields placement in the message is that the application-properties section is defined by the message publisher and the brokers cannot mutate those properties because that section is immutable. On the other hand, the section message-annotations is designed for message brokers usage. In other words, the fields inside that section can be mutated during the message processing. So it means that in case the need arises to annotate the message inside the middleware as it flows, that must happen in the message-annotations section, using the fields sent by the publisher in application-properties as a base.

The W3C Trace Context standard came to define a pattern to the distributed tracing process. Currently, there is only one W3C Recommendation which is for HTTP calls (lauched in february 2020), all the other standards are in working in process (AMQP, MQTT and baggage). It doesn't means that you should avoid to use the standard in a production environment, but keep in mind that some things are going to change and it's important to be up to date with newer releases.

If you got until here and liked the article content, let me know reacting to the current post. You can also open a discussion below, I'll try to answer soon. On the other hand, if you think that I said something wrong, please open an issue in the article's github repo. In the next article, I'll show a full distributed trace example using the trace context concept (in a microsservice architecture using .NET 5). Hope you like it!

Once suspended, luizhlelis will not be able to comment or publish posts until their suspension is removed.

Once unsuspended, luizhlelis will be able to comment and publish posts again.

Once unpublished, all posts by luizhlelis will become hidden and only accessible to themselves.

If luizhlelis is not suspended, they can still re-publish their posts from their dashboard.

Once unpublished, this post will become invisible to the public and only accessible to Luiz Lelis.

Thanks for keeping DEV Community 👩‍💻👨‍💻 safe. Here is what you can do to flag luizhlelis:

Unflagging luizhlelis will restore default visibility to their posts.