Continuous integration (CI) is a software development practice in which developers merge their changes to the main branch many times per day. Each merge triggers an automated code build and test sequence, which ideally runs in less than 10 minutes. A successful CI build may lead to further stages of continuous delivery.

If a build fails, the CI system blocks it from progressing to further stages. The team receives a report and repairs the build quickly, typically within minutes.

Continuous integration requires all developers who work on a project to commit to it. Results need to be transparently available to all team members and build status reported to developers when they are changing the code. In case the main code branch fails to build or pass tests, an alert usually goes out to the entire development team who should take immediate action to get it back to a "green" state.

Why do we need Continuous Integration?

In business, especially in new product development, usually we can't figure everything up front. Taking smaller steps helps us estimate more accurately and validate more frequently. A shorter feedback loop means having more iterations. And it’s the number of iterations, not the number of hours invested, that drives learning.

For software development teams, working in long feedback loops is risky, as it increases the likelihood of errors and the amount of work needed to integrate changes into a working version software.

Small, controlled changes are safe to happen often. And by automating all integration steps, developers avoid repetitive work and human error. Instead of having people decide when and how to run tests, a CI tool monitors the central code repository and runs all automated tests on every commit. Based on the total result of tests, it either accepts or rejects the code commit.

Once we automatically build and test our software, it gets easier to release it. Thus Continuous Integration is often extended with Continuous Delivery, a process in which code changes are also automatically prepared for a release (CI/CD).

In a fine-tuned CI/CD process, all code changes are being deployed to a staging environment, a production environment, or both after the CI stage has been completed.

Continuous delivery can be a fully automated workflow. In that case, it's usually referred to as Continuous Deployment. Or, it can be partially automated with manual steps at critical points. What's common in both scenarios is that developers always have a release artifact from the CI stage that has gone through a standardized test process and is ready to be deployed.

CI and CD are often represented as a pipeline, where new code enters on one end, flows through a series of stages (build, test, staging, production), and published as a new production release to end users on the other end.

Each stage of the CI/CD pipeline is a logical unit in the delivery process. Developers usually divide each unit into a series of subunits that run sequentially or in parallel. 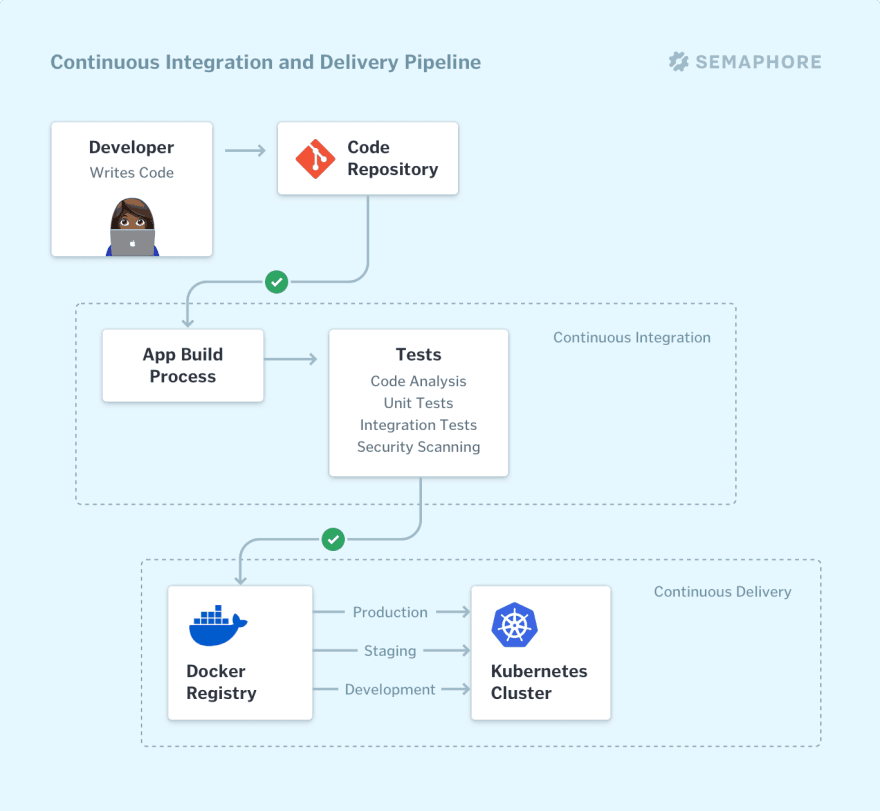 I shared a more detailed post on CI/CD pipelines here on dev.to:

The basic prerequisites for implementing continuous integration include:

Teams that don't practice CI yet should take small steps, continuously improve, and iterate on code and process in a way that helps the organization grow.

On every step in the journey to full CI/CD, the development team's productivity will rise, as well as the velocity of the entire business.

Treat master build as if you're going to make a release at any time. Which implies some team-wide don'ts:

Keep the build fast: up to 10 minutes. Going slower is good but doesn't enable a fast-enough feedback loop.

Parallelize tests. Start by splitting by type (eg. unit and integration), then adopt tools that can parallelize each.

Have all developers commit code to master at least 10 times per day. Avoid long-running feature branches which result in large merges. Build new features iteratively and use feature flags to hide work-in-progress from end users.

Wait for tests to pass before opening a pull request. Keep in mind that a pull request is by definition a call for another developer to review your code. Be mindful of their time.

Use CI to maintain your code. For example, run scheduled workflows to detect newer versions of your libraries and upgrade them.

Keep track of key metrics: total CI build time (including queue time, which your CI tool should maintain at zero) and how often your master is red.

Did you find the post useful? Let me know by ❤️-ing or 🦄-ing it below!

What would you like to learn next about CI/CD? Let me know in the comments.

Once suspended, markoa will not be able to comment or publish posts until their suspension is removed.

Once unsuspended, markoa will be able to comment and publish posts again.

Once unpublished, all posts by markoa will become hidden and only accessible to themselves.

If markoa is not suspended, they can still re-publish their posts from their dashboard.

Once unpublished, this post will become invisible to the public and only accessible to Marko Anastasov.

Thanks for keeping DEV Community 👩‍💻👨‍💻 safe. Here is what you can do to flag markoa:

Unflagging markoa will restore default visibility to their posts.