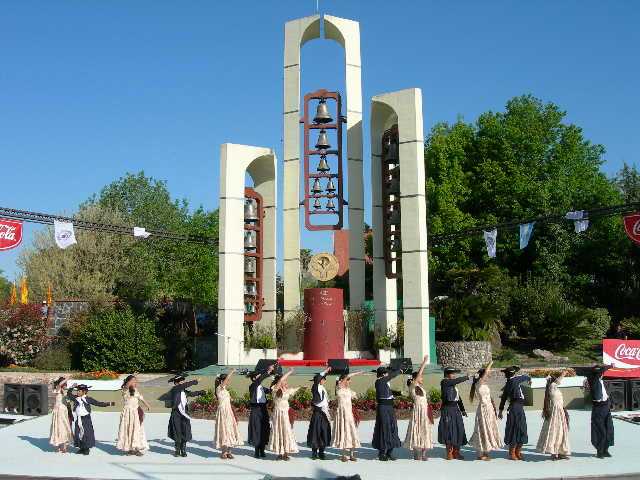 There are 18 pneumatic bells, controlled by a Raspberry Pi Zero using two IO Pi Zero boards and then a driver module composed of triacs. Each IO expander gives us 16 GPIOs with a total of 24 channels. There is a MIDI keyboard connected to the setup, so they can play live, and also record songs.

The Raspberry Pi setup is only two years old, and before that the automation was driven by a couple of PIC processors, that could only play one song: “Ayer” (Spanish for “Yesterday”), as the label in the memory chip advertises. The first move to revamp the instrument was to use a Pi and some python, but the time for the real thing has come, so, python don’t be shy and move aside, Smalltalk is coming.

Each bell is associated to a given musical note. So you can play any MIDI file on the Pi and the notes of the song will actually be mapped to the tuned bells. Of course, there are MIDIs that may not sound very well when played, for example, if they use more than the 18 available notes, or if they use chords or play too fast. So… there are MIDIs that sound better than others. But that’s outside the scope of this post. 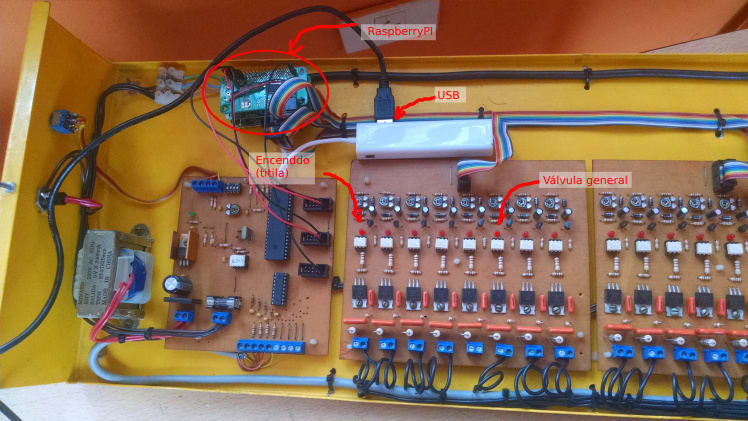 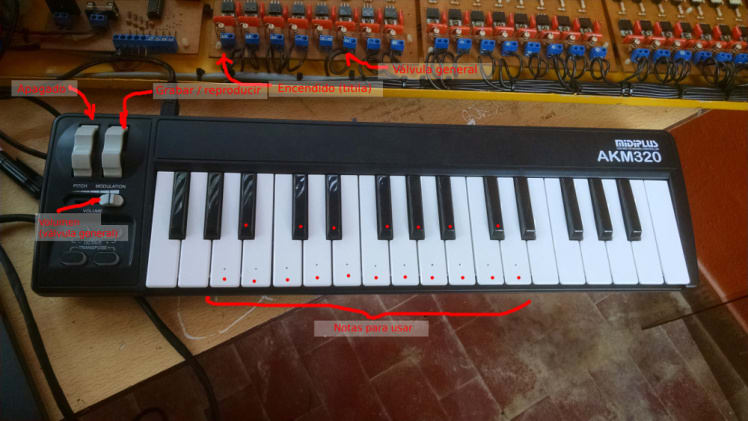 All this setup, as well as the code (open-source and available in Github), was developed by my friend Gera Richarte, so all credits go to him. The original code was 100% in Python.

For this year, Gera wanted to provide a web interface (also running in the Pi Zero!!!) so that you can select which songs to play, stop, pause, and do some admin tasks. As I was doing lots of experiments with IoT and VASmalltalk, I joined him so that both together could:

The first thing we needed to do was to be able to “read” the MIDI events of the running MIDI song. For this we relied on some Python tooling and we created a simple midi2tcp script and a TCP client in Smalltalk. The Python listens for MIDI events using rtmidi and just forwards them to the TCP endpoint running in Smalltalk.

Even if that was enough for our needs, Gera went ahead and also coded a tcp2midi in Python so that we could also talk back MIDI events from Smalltalk to Python, and do things like:

Below you can see a nice video about it:

With this step, we were able to start getting MIDI events on Smalltalk. You can find this MIDI code here.

On a previous post, you can see how to get started with Smalltalk and the Raspberry Pi as well as how to use the GPIOs with the pigpio wrapper.

The IO expander consist of a MCP23017 chip which supports the protocols I2C and SPI. We used I2C and so we created a class I2CDeviceGPIOMCP23017 subclass of I2cDevice. 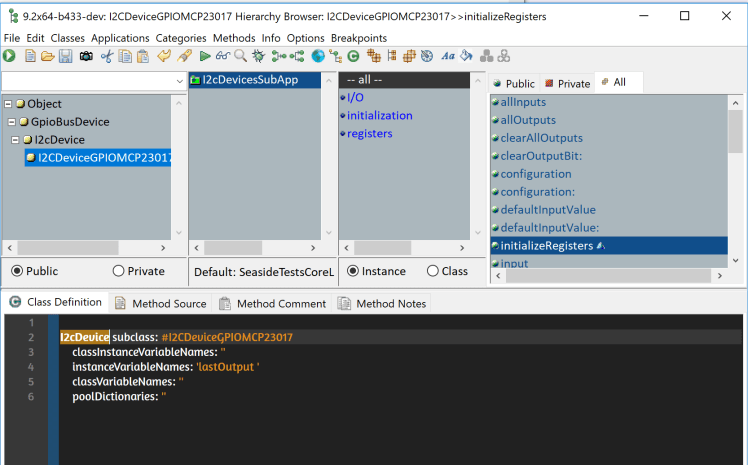 But that was not all… the most amazing part is that Gera coded all this on a Linux desktop without any Pi. He wrote all unit tests with an interesting mocking technique (for another post!). And guess what? When we tried on the Pi, the whole I2CDeviceGPIOMCP23017 was working perfectly. 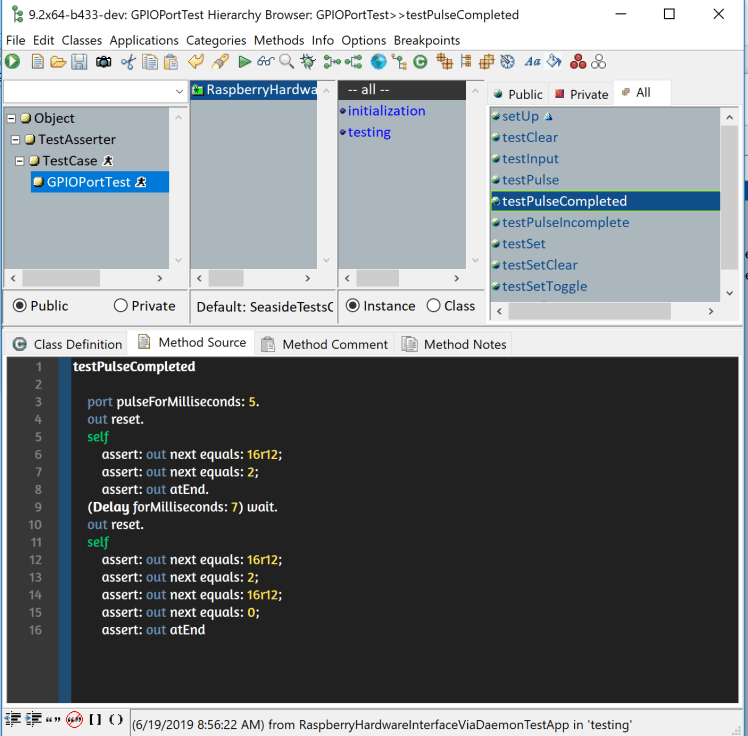 Eventually he tried on the Pi. But not his. Mine. Remotely. From 10km away. This is thanks to the ability of pigpio to work remotely with a daemon. See this post for details. 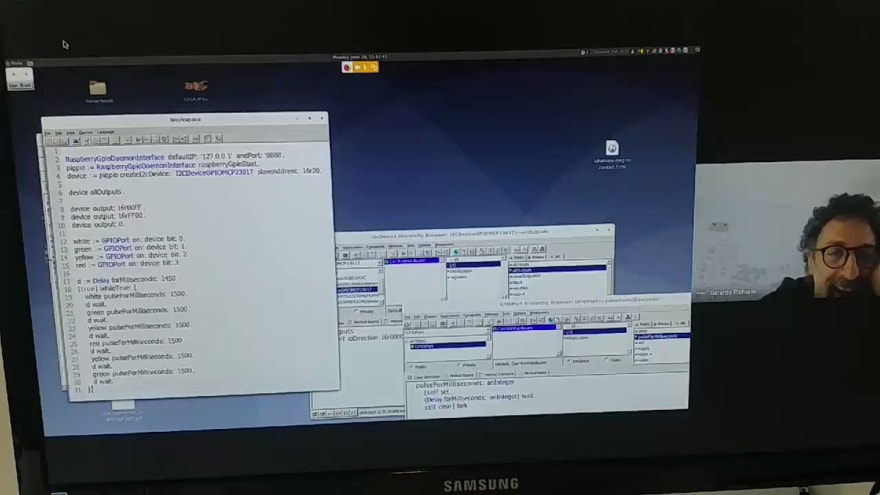 Live from Las Vegas: @gerasdf decided to hangout with me over #GPIO leds. #pigpiod running on my #RaspberryPi on port 8888 at Buenos Aires. He is using a #Linux machine with #VASmalltalk and #pidpiod to remotely control my Pi's GPIOs. Pics below. #IoT #Smalltalk

So… after this step, we were able to use our IO expander via I2C from Smalltalk.

This is the part I am being involved the most. It’s a simple server-side rendering application made with Seaside and Bootstrap frameworks. All requests are AJAX. The application is then prepared for deployment and runs headless on the Pi Zero.

The code is quite simple. What we do to play a song is to fork a OS process and execute the Unix command aplaymidi. For example:

Putting all pieces together

We have a web interface that can start playing MIDI songs. We have a Python midi2tcp that process MIDI notes and send them via TCP to a server in Smalltalk. The MIDI notes are then mapped to concrete GPIOs (representing a particular bell) and we pulse those GPIOs that eventually end up hitting the physical bell.

Testing with a Do-It-Yourself LEDs piano

So far everything great. But how do we test this without having to go there and test with the physical bells? Well… we could print into the console the MIDI notes being processed as well as the GPIO numbers being activated. But seriously, is that fun? No!

Therefore…I built a 16 leds piano. I assigned each led the correct note exactly in the same order as they are in “El Carrillon”. See the piano live: 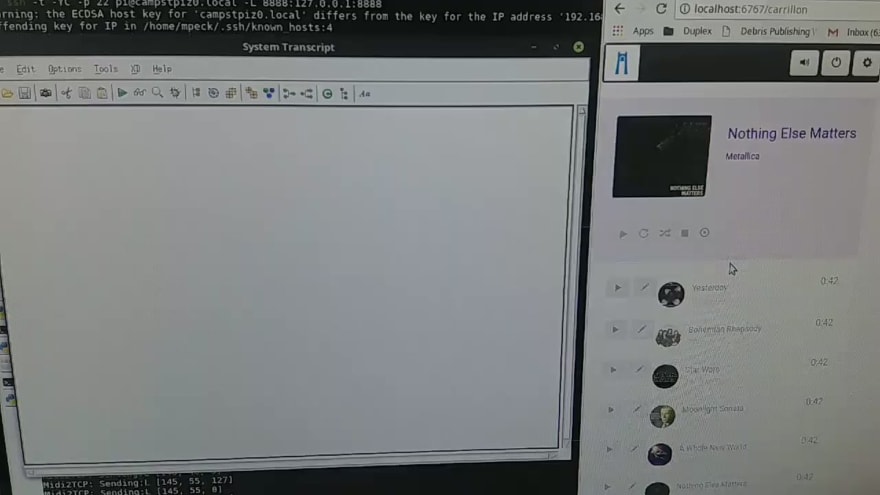 MUST WATCH! #VASmalltalk will soon be playing the largest #MIDI instrument of the world (?) from a #RaspberryPi Zero. We obviously can’t move the #Carrillon, so we mocked it with a #DIY LED Piano powered by #GPIO. Thanks @gerasdf!! #IoT #IIoT #Smalltalk @IoTEvolution @IoTwatcher

And of course, not only we can play from our web console but I can also play any song with a virtual keyboard hahah: 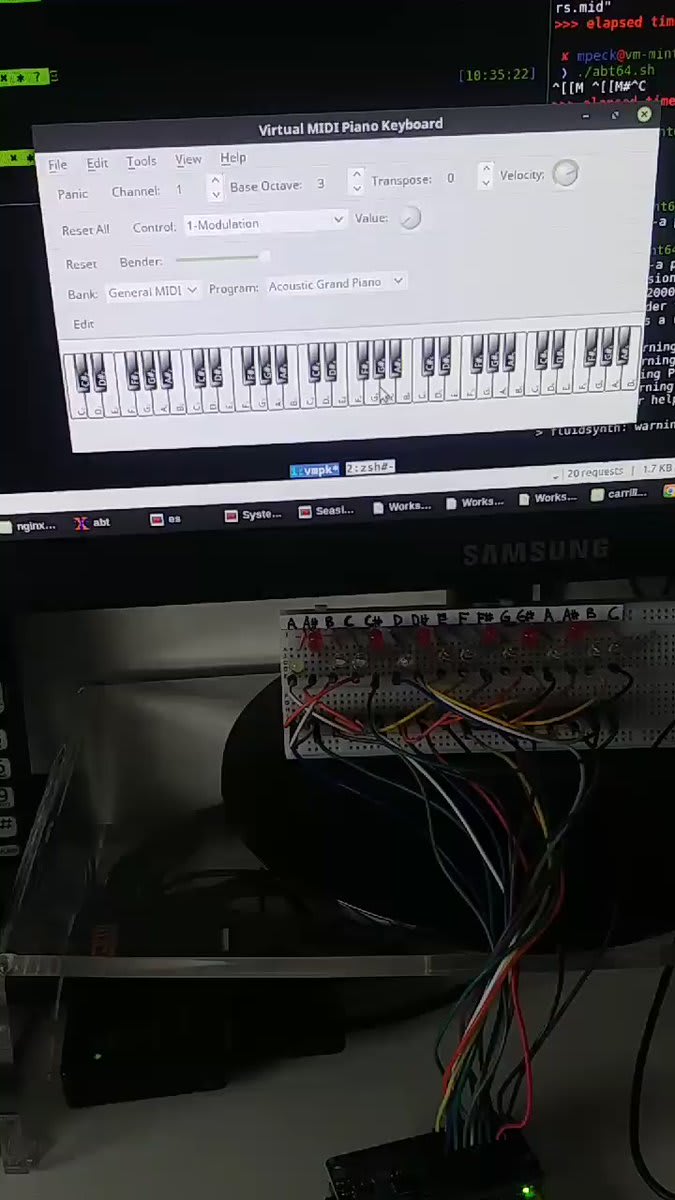 Is it too geek to play "happy birthday" song to myself in a #DYI LED Piano running with #Raspberry and #VASmalltalk? hahhaaha. Come on! I know the music is not my thing, but I can only do it once per year :)

That’s all! Hope you enjoyed.

I work from a Van! Vanlife

Try these 4 languages from 4 corners of Programming