If the web app's UI depends on the user's local time, make sure that static site generators such as Next.js will produce HTML pages only on the client-side.

For example, if a React app's UI turns into the dark mode automatically after 6pm at the user's local time, use the useEffect() hook to generate HTML pages. Otherwise, as shown in the image above, buttons (statically generated) may get rendered in the dark mode while the embedded Google Maps (rendered at the client-side) is shown in the light mode, or vice versa.

I'm making a web app called My Ideal Map App, which embeds Google Maps full-screen, to improve the user experiences of Google Maps. (For detail, see the following article of mine.) 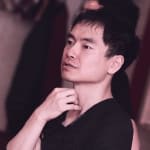 Day 1: Creating SaaS to solve my own problem

One improvement is to automatically turn on the dark mode after 6pm in the user's local time. The app is meant to be used on a mobile device when the user is going out. I want its UI to be bright at daytime and dark at nighttime, without the need to manually switch the dark mode on and off. (For detail, see the following article of mine.)

I've also designed the dark mode color scheme for buttons to be shown on top of the embedded Google Maps:

After coding the rendering of buttons so they will be shown in the dark mode after 6pm along with the embedded Google Maps, I deployed the app to Cloudflare Pages. Cloudflare Pages assigns the unique URL to each deployment so I can check how the browser shows the production version of the web app I'm making.

It was around 3pm in Japan (where I live). So visiting the URL should show the light mode version of My Ideal Map App, as in the left half of the following image: 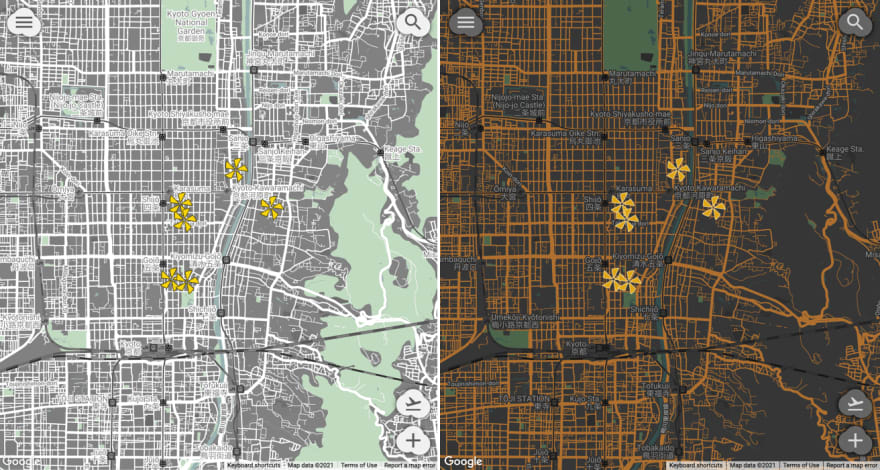 But I saw this: 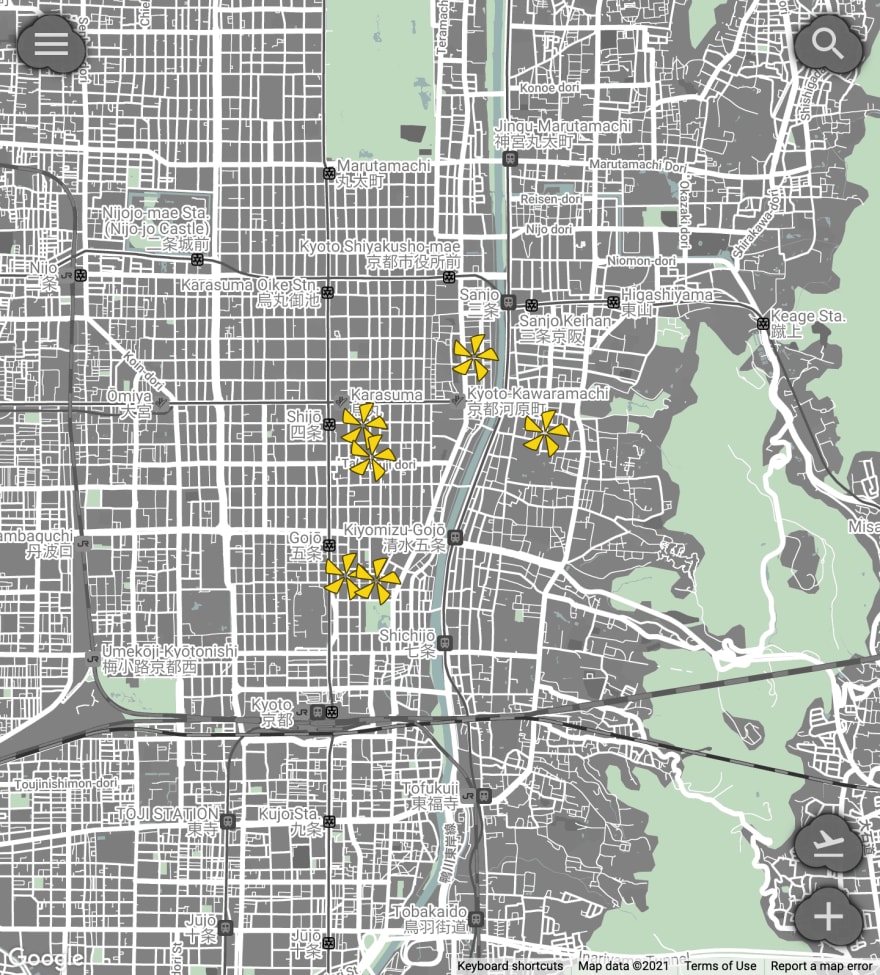 The map is rendered in the light mode as expected. But buttons are in the dark mode, looking like rainy clouds... :-)

You can see the deployment with this bug at https://05da7f84.mima.pages.dev. If your local time is between 6am and 6pm, you will see these rainy clouds. :-)

Incidentally, for why I've made buttons look like clouds, see the following article of mine:

How can it be possible to make the dark mode co-exist with the light mode? I really scratched my head.

It turns out that the reason is the pre-rendering of buttons with Next.js, a React framework that I've been using to build My Ideal Map App.

Next.js pre-renders all the pages by default (see Next.js Documentation). That is, when a web developer uploads the code, the server will immediately run JavaScript to generate HTML pages. When the user logs on to the web app, these pre-built HTML pages will be sent to the browser.

(If you're unsure of what benefits "pre-rendering" brings about, have a look at the article that I wrote after having the same question more than a year ago: Kudamatsu 2020).

What happened to me was as follows: I deployed the web app to the Cloudflare Pages server when the server's clock was after 6pm (Cloudflare has many servers across the world). Which made the server build the buttons in the dark mode.

However, the embedded Google Maps is always rendered by the browser (this fact is not clearly written anywhere in Google Maps Platform documentation, but it's pointed out by many such as Starkov 2017). So when I visited the deployed web app around 3pm in my local time, the map got rendered in the light mode.

As a result, I saw the buttons in the dark mode rendered over the map in the light mode...

A lesson is learned. If a web app's UI is dependent on the user's local time, be careful of using static site generators such as Next.js and Gatsby.

A work around: useEffect()

Maybe I shouldn't use Next.js but use Create React App instead (which only allows client-side rendering). But Next.js has many other convenient features for web developers, and I'm used to using it for building a web app (I've made Triangulum Color Picker with Next.js). So I don't want to switch to another React framework.

After quite a bit of struggle over half a day, I found a solution suggested by Dong (2020), which is more generally discussed in Comeau (2021).

Here's how it works for my case.

The code generating the bug

In the pages/index.js (which Next.js will transform into the index.html page), I initially had the following code (showing only the relevant part):

I've coded four buttons and the <Map> component that embeds Google Maps. To switch on/off the dark mode for each of these five components, I wrap them all with <NightModeProvider>, which is created out of React Context Provider:

It checks whether the local time is between 6pm and 6am. If so, it sets nightMode to be true and passes it to child components. (See Section 3.2 of Day 5 of this blog series for detail.)

The code for fixing the bug

This way, when deployed, the server won't render these button components because clientSideRendering is false.

To allow the user's browser to run the code for rendering buttons, turn clientSideRendering into true inside the useEffect() hook:

The code inside the useEffect() hook will be run only after the components listed as a return value have been rendered. Then, as the setClientSideRendering state variable changes, all the components will be re-rendered based on the new value of the state, which renders all the buttons (based on the user's local time).

This process won't be triggered when the server pre-renders components, which avoids rendering buttons in the light or dark mode based on the time at which the web app is deployed.

Now I get the following UI after 6pm: 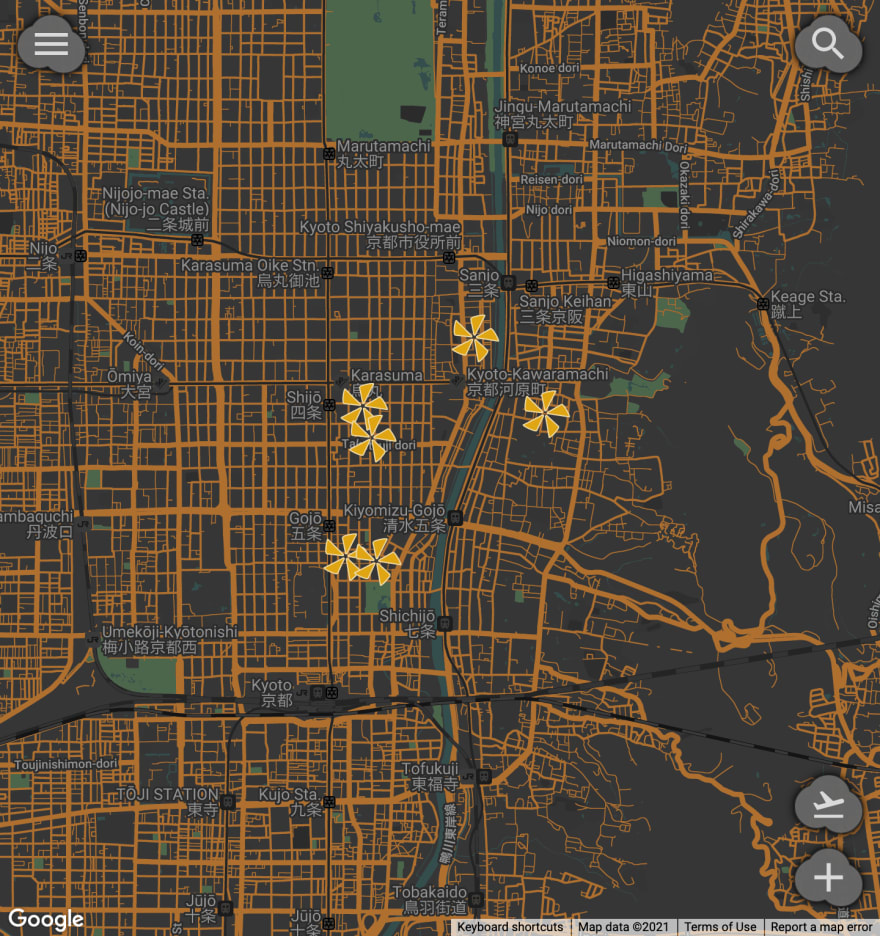 Here is a demo hosted by Cloudflare Pages. If you don't see the dark mode UI as in the image above after 6pm in your local time, file a bug report by posting a comment to this article. ;-)

Finally, I'm done with buttons for My Ideal Map App. Next step is to add functionalities to these buttons. I'll start with the locator button (the one with the flight takeoff icon), which will show the user's current location on the map.