This post covers how you can update your app to use React 17. And what do you get from using React 17 and React Scripts 4

1. ⬆ Update your existing create-react-app app to use React 17.

Updating the versions of the packages

First off, open your package.json file in your project and change the react, react-dom and react-scripts versions as shown below 👇

Then run npm i or yarn as per the package manager you are using to install those updated versions.

Once you have updated to React 17 and React Scripts 4, you will use JSX Transform, and for that, you will have to edit all the files, which is not a programmer does 😉.

There is a simple script provided by React, which will remove all of your React imports from your components.

Run this script inside of your folder in the CLI,

If you are getting any errors running this command above, it's because you have not committed your git changes, you can put a --force to force it to do that

This is the 1st question you will get after running that command
You can select the (.) folder and press enter because you want it to do in the current directory.

The next question would be that which type of JavaScript are you using in your project, you can select the one you are using

Once every question is complete, it'll do it's job and remove the React imports from all the components 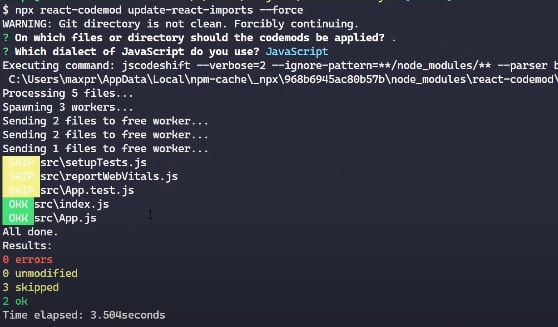 This is not specifically a setting to enable but it is rather a feature by create-react-app. In your cra apps, you will find that when you save your code and check the browser, it won't refresh and will make changes instantly

You can check how it works on this video

With React Scripts version 4, you no longer have the serviceWorker.js file which you had in the earlier versions of React Scripts. It is removed now and will not work even if you have the file, it will fail at build time.
There is a new thing called reportWebVitals.js which helps you check the performace of your app. Learn more

Finally, Give the post a 💙 like if you liked it, and don't hesitate to ask questions and give suggestions in the 💬 comments. Thanks for reading 🙏

Once suspended, maxprogramming will not be able to comment or publish posts until their suspension is removed.

Once unsuspended, maxprogramming will be able to comment and publish posts again.

Once unpublished, all posts by maxprogramming will become hidden and only accessible to themselves.

If maxprogramming is not suspended, they can still re-publish their posts from their dashboard.

Once unpublished, this post will become invisible to the public and only accessible to Max Programming.

Thanks for keeping DEV Community 👩‍💻👨‍💻 safe. Here is what you can do to flag maxprogramming:

Unflagging maxprogramming will restore default visibility to their posts.