What I often need is to test my code against different environments. In this small post I am going to show how one can build hosted solution to test your source code in running Docker container by using Sparrowdo and Sparky.

Imperative deployment scenarios written on Perl6, nice web UI and asynchronous task execution is what you'll get for free!

Part1 / Spinning up a docker container

This step is trivial, as we pull desired docker image and run it as a container:

So as we might guess I want to test my code against Arch Linux server. The same pattern is applied if you need to test against different environments, just change the docker image.

Say, I keep my source code somewhere in GitHub repository - https://github.com/melezhik/hello-world/blob/master/hello.bash - and for example purpose it is as simple as "hello world" Bash script:

Of course real life application are much more sophisticated, however this does not limit our approach.

I am going to use Sparrowdo to deploy an application code, so as the code is quite trivial this one should be as simple as fetching a source code from GitHub and running the "main" script:

Let's create a Sparky project to deploy mentioned Sparrowdo scenario on the running docker container. Sparky profile sparky.yaml would be:

Here we ask Sparky to run our deployment scenario every 10 minutes on the running docker container named elastic_sinoussi ( the name of the container could be given by command docker ps).

So the final structure of our Sparky project would be:

Where sparrowfile file contains a Sparrow deployment scenario and sparky.yaml does a Sparky settings ( like scheduler parameters, docker instance name and so on ).

It will take for awhile to build a project by Sparky, meanwhile we can observer the project builds by visiting nice Sparky web UI, following is couple of screen shots: 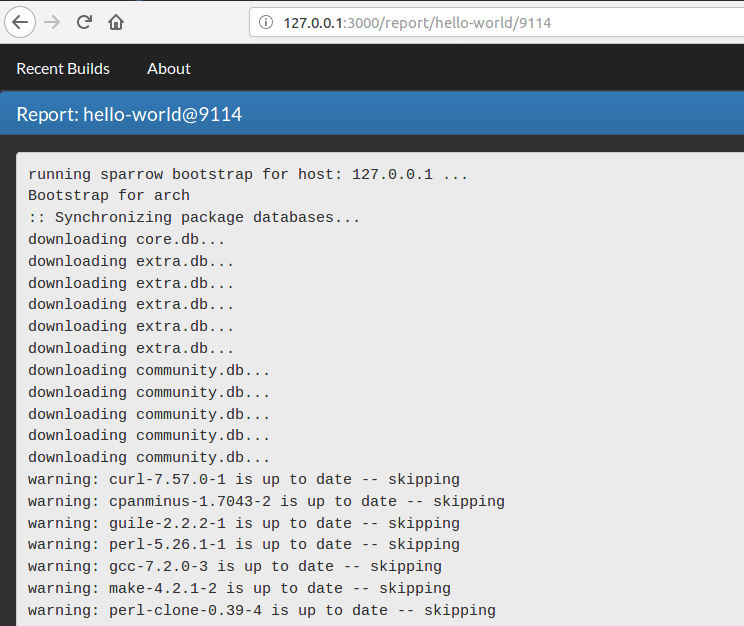 And finally we might notice that the project gets built successfully:

What is Deployment, Service, Secret and ConfigMap in Kubernetes?

Memory Game : Based on JavaScript

How to stop and remove all Docker containers