In the Enterprise Database Security session I presented at Aerospike Summit 2020 I gave an overview of data protection with Aerospike Enterprise.

To provide context, refer to the following diagram depicting an Aerospike deployment. 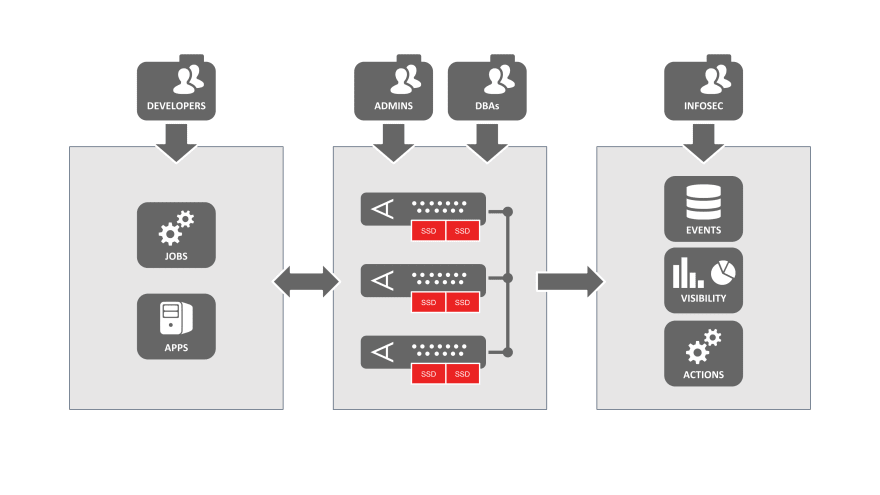 Even after securing the network and implementing authentication and authorization, remember that we're persisting this data on physical devices somewhere. Even in the cloud there’s still racks and servers behind all that "magic".

So how do we protect that persisted data from unauthorized access and how do we reduce the attack surface?

For protecting data at rest, that is, data persisted in the storage layer, we want to look at how we do data isolation and encryption in Aerospike. 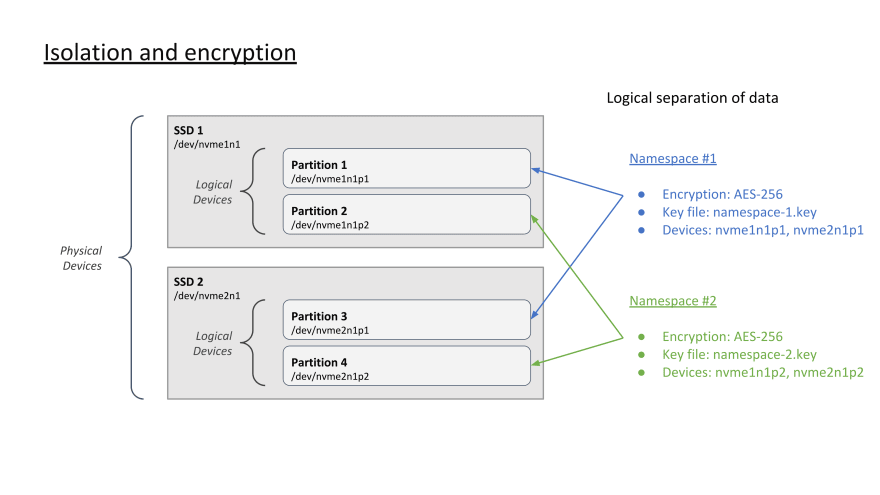 The diagram above depicts two SSD devices physically attached to an Aerospike server node. These are physical devices.

In this example, each SSD device is also divided into two logical partitions for a total of 4 partitions. These are logical devices and data stored on one partition is logically separate from data in the other partitions.

One of the authorization scopes we can apply to a permission with Aerospike’s access controls is namespace. Namespaces not only provide scope for access controls, they also configure the storage layer. That configuration includes which physical or logical devices the data is persisted to, enabling AES encryption, and which key is used to encrypt and decrypt that data.

So what that means is, from a data protection standpoint, each namespace provides data isolation from other namespaces. If the user credentials or the encryption key for Namespace #1 were to be compromised, the data stored in Namespace #2 is protected separately.

The data is encrypted in transit with TLS and encrypted at rest using AES encryption on the namespace. So far so good.

However, the Aerospike process itself is obviously working with the unencrypted data in memory. Standard OS/system hardening procedures and system access controls are absolutely critical for Aerospike deployments that store sensitive data. I’m not going to get into Linux system hardening as it’s tangential and there are plenty of industry standard tools, processes, and requirements on that front. But I do want to emphasise a best practice:

In general we don’t recommend running Aerospike along side any other non-related applications, but it’s especially important when working with sensitive data. It may be tempting or convenient to run some tools or dashboards directly on one of the Aerospike nodes but, that just increases the surface area for potential vulnerabilities.

The tools or dashboards should not have direct access to sensitive data and therefore should not be running on an Aerospike node.

A less obvious example of this is the Aerospike Tools package which includes the aql, asinfo and asadm commands among others. These administrative tools are bundled with the Aerospike Server and they are required to be run directly on the Aerospike nodes for a subset of operational tasks. Obtaining a collectinfo is a good example of this.

However, the tools are also available as a stand-alone package and can be run from a remote server for most tasks. So a best practice is to make the Aerospike Tools available to authorized users on dedicated nodes specifically for that purpose. You will still want an escalation path that allows for node-level diagnostics and troubleshooting, however, that should be the exception and not the rule.

Protecting secrets in general is a very broad topic. So to keep things brief here I just want to enumerate the secrets associated with Aerospike that need to be protected and a couple of common patterns for how that’s done in a Production environment. 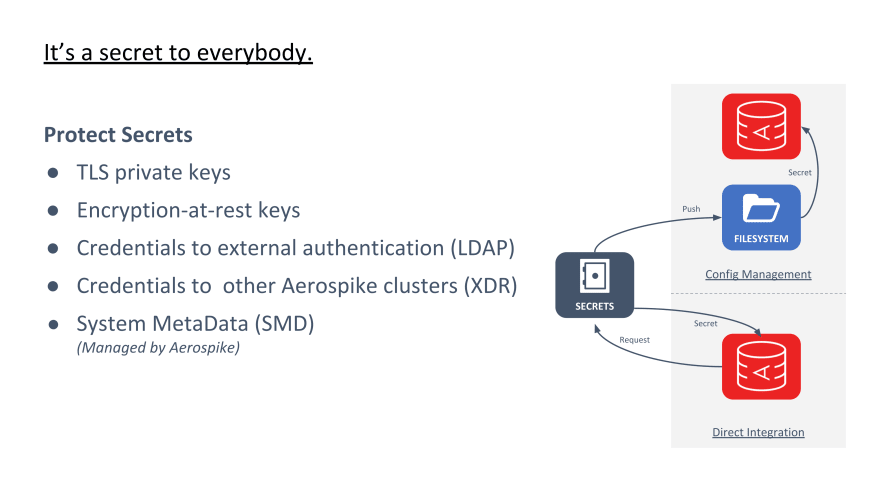 On any given Aerospike server node you may have TLS private keys, encryption-at-rest keys, external authentication (LDAP) credentials, and Cross-Datacent Replication (XDR) credentials. All of these secrets must be protected.

These secrets are essentially bits of configuration that you are managing. They are keys and passwords that need to be available to the Aerospike process (asd) at startup or at runtime. Once those secrets make it to the server your OS hardening and system access controls are in place to protect them. However, the challenge is in managing the full lifecycle of those secrets. They have to be created, they have to get deployed onto the servers, they may need to be revoked, and they will need to be rotated periodically.

The second pattern, shown as the bottom-half of this diagram, is for Aerospike to integrate directly with the secrets management system. However, this requires Aerospike compatibility with a specific secret store. At this point in time Aerospike supports just one direct integration with a secrets management platform and that is the Vault Integration with Aerospike. Vault in turn integrates with a large number of other systems.

This pattern has the advantage of centrally managing secrets. When implemented correctly it lowers the credential management burden and lowers the risk of compromised secrets.

However, being a direct integration, this pattern requires that the secret store is able to meet availability and scalability requirements. This means that this pattern is going to be a more complex architecture.

AWS is only as safe as the weakest credentials setup for your developers.

How do I protect my privacy if personal data leak in the service?

Once suspended, micahcarrick will not be able to comment or publish posts until their suspension is removed.

Once unsuspended, micahcarrick will be able to comment and publish posts again.

Once unpublished, all posts by micahcarrick will become hidden and only accessible to themselves.

If micahcarrick is not suspended, they can still re-publish their posts from their dashboard.

Once unpublished, this post will become invisible to the public and only accessible to Micah Carrick.

Thanks for keeping DEV Community safe. Here is what you can do to flag micahcarrick:

Unflagging micahcarrick will restore default visibility to their posts.