For a recent university project, our team was tasked to deliver a video calling feature for both our iOS and web app. There are many solutions out there that promise video calling, but only few are free and mostly just work for one platform. As we had to build it for iOS and the web, we decided to use plain WebRTC, 'cause "can't be that hard, right ¯\_(ツ)_/¯"

I remember myself skimming through blog posts and tutorials, trying to find the minimum required steps, eventually even reading through the Signal iOS repository. So here's the bare gist of what you need to know to get going with WebRTC (or at least search for the things that don't work in your project):

If this didn't help you with your problems, or you're generally interested in WebRTC, keep on reading. We'll first look at what WebRTC is and then we'll build ourselves a small video chat.

I'll just borrow the "about" section from the official website:

WebRTC is a free, open project that provides browsers and mobile applications with Real-Time Communications (RTC) capabilities via simple APIs. The WebRTC components have been optimized to best serve this purpose.
— webrtc.org

In a nutshell, WebRTC allows you to build apps, that exchange data in real-time using a peer-to-peer connection. The data can be audio, video, or anything you want. For instance, Signal calls are done over pure WebRTC, and due to the peer-to-peer nature, work mostly without sending your call data through a third party, e.g. like Skype does now.

To establish the peer-to-peer connection between two calling parties, they need to know how to connect to each other. This is where STUN comes in. As mentioned above, it's similar to traceroute.

When you create a WebRTC client object in JavaScript, you need to provide iceServerUrls, which are essentially URLs for STUN servers. The client then goes through all hops until it reaches the STUN server. The following sequence diagram shows how it works in a simplified way: 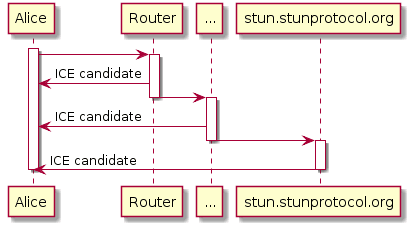 The "further" a candidate is away from Alice (the more hops it takes to reach her), the higher its network cost is. localhost:12345 is closer to her than public_ip:45678, so the localhost cost could be 10, whereas the public_ip one could be 100. WebRTC tries to establish a connection with the lowest network cost, to ensure a high bandwidth.

If you want to FaceTime with a friend, they might be interested in knowing how you're calling them, i.e. they want to see whether you're using only audio or video, or even if you're not using FaceTime at all and just call them from your landline.

WebRTC offers are similar to this: you specify what you'll be sending in the upcoming connection. So when you peer.createOffer(), it checks which tracks, e.g. video or audio, are present and includes them in the offer. Once the called party receives an offer, it peer.createAnswer() specifying its own capabilities, e.g. if it'll also send audio and video.

An important part of WebRTC is exchanging information before the peer-to-peer connection is established. Both parties need to exchange an offer and answer, and they need to know the other side's ICE candidates, or they won't know where to send their audio and video streams after all.

That's where signalling comes in: you need to send said information to both parties. You can use anything you want to do this, but it's easiest to use a duplex connection that e.g. WebSockets provide. Using WebSockets, you'll be "notified" whenever there's an update from your signalling server. 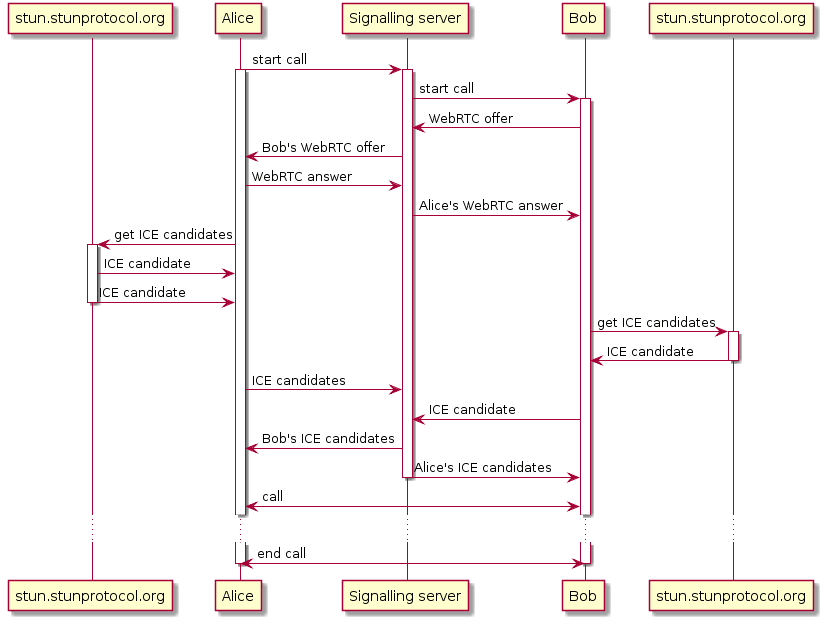 First, Alice signals she wants to call Bob, so both parties initiate the WebRTC "handshake". They both acquire their ICE candidates, which they send to the other party via the signalling server. At some point, Alice creates an offer and sends it to Bob. It doesn't matter who creates the offer first (i.e. Alice or Bob), but the other party must create the answer to the offer. As both Alice and Bob know how to contact each other and what data will be sent, the peer-to-peer connection is established and they can have their conversation.

Now we know how WebRTC works, we "just" have to build it. This post will focus only on using web clients, if there's interest for an iOS version in the comments, I'll summarise the pitfalls in a new post. Also, I currently implemented the web client as a React hook useWebRTC, which I might create a post for as well.

The server will be in TypeScript, whereas the webapp will be plain JavaScript to not have a separate build process. Both will use only plain WebSockets and WebRTC - no magic there. You can find the sources to this post on GitHub.

We'll use express, express-ws and a bunch of other libraries, which you can find in the package.json.

Many WebSocket libraries allow sending data in channels. At its core, a channel is just a field in the message (e.g. like { channel: "foo", data: ... }), allowing the server and app to distinguish where the message belongs to.

The browser implementation of WebSockets lacks the ability to send who you are, e.g. adding an Authorization header with your token isn't possible. We could add our token through the WebSocket's URL as a query parameter, but that implies it'll be logged on the web server and potentially cached on the browser - we don't want this.

Instead, we'll use a separate login channel, where we'll just send our name. This could be a token or anything else, but for simplicity we'll assume our name is secure and unique enough.

As we're using TypeScript, we can easily define interfaces for our messages, so we can safely exchange messages without worrying about typos:

As we're using union types here, we can later use the TypeScript compiler to identify which message we received from just inspecting the channel property. If message.channel === "start_call", the compiler will infer that the message must be of type StartCallWebSocketMessage. Neat.

We'll use express-ws to expose a WebSocket from our server, which happens to be an express app, served via http.createServer():

Our app will now run on port 3000 (or whatever we provide via PORT), expose a WebSocket on /ws and serve our webapp from the public directory.

As video calling usually requires > 1 person, we also need to keep track of currently connected users. To do so, we can introduce an array connectedUsers, which we update every time someone connects to the WebSocket:

Additionally, we should add helper functions to find users by their name or socket, for our own convenience:

For this post we'll just assume there are no bad actors. So whenever a socket connects, it's a person trying to call someone soon. Our handleSocketConnection looks somewhat like this:

WebSocket messages can be strings or Buffers, so we need to parse them first. If it's a Buffer, calling toString() will convert it to a string.

Our signalling server essentially forwards messages between both calling parties, as shown in the sequence diagram above. To do this, we can create another convenience function forwardMessageToOtherPerson, which sends the incoming message to the otherPerson specified in the message. For debugging, we may even replace the otherPerson field with the sender sending the original message:

In our handleMessage, we can login our user and potentially forward their messages to the other person. Note that all call related messages could be combined under the default statement, but for the sake of more meaningful logging, I explicitly put each channel there:

That's it for the server. When someone connects to the socket, they can login and as soon as they start the WebRTC handshake, messages will be forwarded to the person they're calling.

The web app consists of the index.html, and a JavaScript file web.js. Both are served from the public directory of the app, as shown above. The most important part of the web app are the two <video /> tags, which will be used to display the local and remote video stream. To get a consistent video feed, autoplay needs to be set on the video, or it'll be stuck on the initial frame:

Connecting to the signalling server

Our WebSocket is listening on the same server as our web app, so we can leverage location.host, which includes both hostname and port, to build our socket url. Once connected, we need to login, as WebSockets don't provide additional authentication possibilities:

Now this is what we've been waiting for: WebRTC. In JavaScript, there's a RTCPeerConnection class, which we can use to create WebRTC connections. We need to provide servers for ICE candidate discovery, for instance stun.stunprotocol.org:

Video calling works best when there's video, so we need to send our video stream somehow. Here, the user media API comes in handy, which provides a function to retrieve the user's webcam stream.

The WebRTC API is built around Promises, thus it's easiest to declare an async function and await inside it:

Starting a call from a button

The main thing we're still missing, is starting the call from the "Call someone" button. All we need to do, is send a start_call message to our signalling server, everything else will be handled by our WebSocket and handleMessage:

If we open the app on Chrome and Safari at the same time, we can call ourselves on different browsers. That's kinda cool!

But besides calling, there's a lot more to do that wasn't covered by this post, e.g. cleaning up our connection, which I might cover in a future post (i.e. using React Hooks for WebRTC and WebSockets). Feel free to check out the repo, where you can re-trace everything that's presented in this post as well. Thanks for reading!

Once suspended, michaelneu will not be able to comment or publish posts until their suspension is removed.

Once unsuspended, michaelneu will be able to comment and publish posts again.

Once unpublished, all posts by michaelneu will become hidden and only accessible to themselves.

If michaelneu is not suspended, they can still re-publish their posts from their dashboard.

Once unpublished, this post will become invisible to the public and only accessible to Michael Neu.

Thanks for keeping DEV Community 👩‍💻👨‍💻 safe. Here is what you can do to flag michaelneu:

Unflagging michaelneu will restore default visibility to their posts.