The web is full of guides on how to switch from .Net Framework to .Net Core. As someone who had the chance to migrate a web app from Framework to Core, I realized that each article gives only a few parts of the whole picture. In order to switch between these frameworks, I had to understand the fundamentals changes (and the reasons behind these changes) in Microsoft's .Net projects.

In this article I give my recommendation on how one should approach this large task, and what I believe is important to know prior to starting a migration of a .Net Framework project. Each subject has a reference to a thorough documentation/article worth reading.

From Framework to Core

It is important to understand that .Net Framework and .Net Core aren’t two separate frameworks with their own life-cycles and goals, but rather one is an extension of the other. .Net Core is meant to extend its predecessor framework and offer solutions to the same problems (desktop, web, mobile, cloud-native and more). 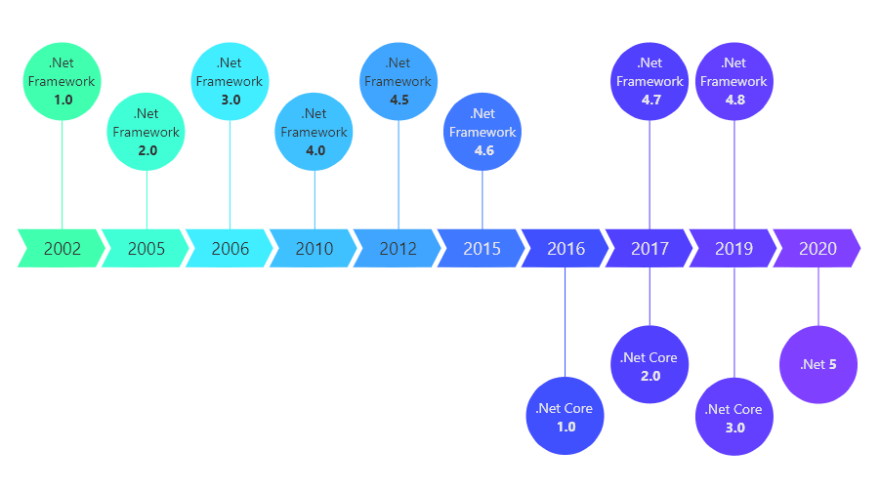 Apart from restructure and refactor of most .Net libraries, .Net Core brings a couple of key changes:

As mentioned above, even apps intended to find themselves running on windows should choose .Net Core simply because it’s the latest .Net offers and supports.

Why I migrated to .Net Core

There are many reasons to make such a large change other than the will to get the latest .Net (new is always better? 🤔). In my case, I was working on a large web app that didn't scale that well. We had to throw in more and more servers to keep up with user traffic which made us more maintainers and less developers. In order to set us free of VMs babysitting, we decided to bring in Docker containers to the table. At the time, we didn't want to go for Windows Containers because it was still fresh and unknown territory, so we were left with Linux containers. So, this is how .Net Core came in.

In order to allow compatibility across multiple runtime environments, libraries had to find a common low level API that works on both Framework and Core. Here comes in .Net Standard, a common base build target that exposes interfaces that are eventually implemented for each OS and run environment.
Check out the official docs here and here.

Syntax, features and patterns are all the same. It doesn’t matter whichever .Net target you choose, C# stays the same on every level. Since C# has its own people working on it and making sure the language itself stays compatible with all .Net BCL and targets. This is done at the Roslyn compiler and by referencing common types present in all targets as a standard library (more on the relationship between language and frameworks here).

One thing to keep in mind is that as of C# 8, the language specifically targets .Net Core and a few features are only partially supported by .Net Framework (as mentioned here).

I Recommend checking out this awesome stack overflow answer:

Yes, C# 8 can be used with the .NET Framework and other targets older than .NET Core 3.0/.NET Standard 2.1 in Visual Studio 2019 (or older versions of Visual Studio if you install a Nuget package).

The language version must be set to 8.0 in the csproj file.

OK, then it's easy

If C# is the same, and all we have to do is target .Net Standard, then where is the hassle?
Well, the real pickle is at the platform level. Each platform (such as Asp.Net, Web Api, WPF, etc) had its infrastructure refurbished and open-sourced. As a result, developers had to make adjustments to use the new .Net Core versions of their platform.

Microsoft published a basic guideline article on porting .Net Framework projects to .Net Core, you might want to take a look.

Let's assume we have an Asp.Net Web Api project. What would it take to migrate it to .Net Core?

Well, first of all, .Net Core does not have a new Web Api support. All .Net web applications development was mostly unified under the new Asp.Net Core project. That means you need to migrate to an almost new platform. But fear not, Asp.Net Core left most of the project structure the same.

The main difference is the new classes and libraries used to create the application, such as controllers routing attributes, middlewares and more.

Turns to this .Net Core controller:

Changes are highlighted with (<-)

Middleware pipelining stays pretty much the same in .Net Core (as does the startup file we all ❤️ so much), the changes you might find yourself doing are switching 'native' .Net libraries to their newer alternatives. Take this example:

A tale of Windows & Linux

Like many .Net Framework (on top of Windows) developers, you might have set up Windows Authentication which Worked perfectly with your User is WindowsPrincipal and your Request.IsAuthenticated with IIS. And be assured that a similar code will give you the same with services.AddAuthentication(NegotiateDefaults.AuthenticationScheme) on .Net Core and Windows. However, if you intend to switch to Linux servers, more modifications are required, as Linux needs extra work in order to integrate with Active Directory.

Check out the official Microsoft guide and this Stackify guide.

Another important feature you can notice in these guides is Kestrel. Remember how you had to create a self-host console app project for your development environment? Well no more, Asp.Net Core ships with its own server implementations (for various runtime targets), the most popular of which is Kestrel which supports both Linux and Windows runtimes. Take a look at this overview of hosting with .Net Core.

I really encourage Checking up .Net Core's roadmap from time to time. It gives a clear map of where the .Net world is headed to.

Mike Chatsky
Full stack web developer that thinks that just because he published one article he should add a bio 😅
top 26 Interviewer Questions You Should know
#webdev #programming #career
What are the coolest uses of AI you've seen in the last couple of weeks?
#discuss #ai
What was your win this week?
#discuss #weeklyretro

Once suspended, mikechatsky will not be able to comment or publish posts until their suspension is removed.

Once unsuspended, mikechatsky will be able to comment and publish posts again.

Once unpublished, all posts by mikechatsky will become hidden and only accessible to themselves.

If mikechatsky is not suspended, they can still re-publish their posts from their dashboard.

Once unpublished, this post will become invisible to the public and only accessible to Mike Chatsky.

Thanks for keeping DEV Community 👩‍💻👨‍💻 safe. Here is what you can do to flag mikechatsky:

Unflagging mikechatsky will restore default visibility to their posts.