I have been working on many Symfony projects in my career and one of the most common problems where customers call our company is that their software is blocked in the old framework version, or they are not maintainable because it costs a lot to find and fix bugs.

Usually, I try to understand well why those legacy projects are in that state. And often I have found a common pattern: the team at the beginning of the project needs to create an application from zero in a rapid way because there is a strict deadline.
Usually, they start in this way:

These steps for me are not the best practice because they started immediately to code something instead of understanding the domain and behaviors.
I think that in the situation explained previously they were guided from the framework.
In my opinion, it is better to concentrate your effort on the domain and you need to treat Symfony (or a framework in general) as a tool not the main core of the software because the real value of your software is the domain, the solution that you implement to solve problems.

Be guided from the framework has many side effects and one of the most dangerous is coupling domain and framework that can create many problems like:

But don’t be scared, there is an architecture that can help you to avoid these problems: hexagonal architecture.

The hexagonal architecture was invented by Alistair Cockburn in an attempt to avoid known structural pitfalls in object-oriented software design, such as undesired dependencies between layers and contamination of user interface code with business logic, and published in 2005.

The hexagonal architecture divides a system into several loosely-coupled interchangeable components, such as the application core, the database, the user interface, test scripts, and interfaces with other systems. This approach is an alternative to the traditional layered architecture. (Wikipedia)

When I read and explain this definition many times developers ask me: is it an over-engineer strategy?

Well, you have more classes, more concepts, and more moments where you need to think a lot about the correct position of a class, naming a class, or a better name for a variable; again it depends on you, I can only recommend to try to apply this strategy and improve your skill with it.

A project written 10 years ago is blocked into an old PHP version and you would like to migrate to a new version.
Upgrade PHP means that you need to upgrade the framework and vendors touching the business logic because everything is coupled.
You can’t upgrade in a securly way because the code is not fully covered by tests.
In that case, you have a not maintainable application.
All these problems are common if you have coupled your domain and framework.

Another good example of a coupling code is when you have remote services and they change something.

Let’s imagine that you have a payment gateway provider that releases a new version of it and your current version used in your application is not already supported.
You can switch to a new version or replace it with another gateway provider but you know that you have to refactor many parts all over the project because your domain is strictly coupled with the library or service.
So you need to put a lot of effort into rewriting many parts and you can introduce bugs.

With hexagonal architecture, you can replace, and change only adapters, without touching your domain logic because it is decoupled from the framework.

In the previous class there are some problems in my opinion:

Let's try to decouple that code

In this case, and many others, the use of interfaces and dependency injection pattern allow developers to decouple the code because whenever you want you can change the implementation with a new one that implements that interface.

Another advantage of the decoupling example is: now you can call the class Payment from an HTTP web request or CLI command because you need to pass an object Money (usually I try to pass a typed object or DTO) instead of a Request object.

The coupling domain and framework have the dark side effect of creating a not maintainable application.

For maintainability I mean is the absence (reduction) of technical debt.
Technical debt is the debt we pay for our (bad) decisions, and it’s paid back in time and frustration.

A maintainable application is one that increases technical debt at the slowest rate we can feasibly achieve.

What are the measures of a highly maintainable application?

To touch less code as possible for new features or legacy features it’s important to delegate a specific class that has one single responsibility.

A good concept to follow is the single responsibility for the code but it exists also for the architecture: what changes for the same reason should be grouped, for examples:

So we can create the most important distinction in our project: Domain, Application, and infrastructure.

For domain I mean:

For application I mean:

For infrastructure I mean

The number of sides is arbitrary.
The point is that it has many sides.
Each side represents a “port” into or out of our application.
Each port can be used by adapters to make our system work fine.
Let’s explain what ports and adapters mean in depth.

Ports are like contracts so they will not have any representation in the codebase.

There is a port for every way a use case of the application can be invoked (through the UI, API, etc.) as well as for all the ways data leaves the application (persistence, notifications to other systems, etc…). Cockburn calls these primary and secondary ports or usually, developers call them input and output ports.

Primary and secondary are the distinction between intention for communication and the supporting implementation.

Ports are only definitions of what we would like to do. They are not saying how to achieve them.

Adapters are the implementation of the ports because for each of these abstract ports we need some code to make the connection work.

They are very concrete and contain low-level code, and are by definition decoupled from their ports.

Example of the adapter: 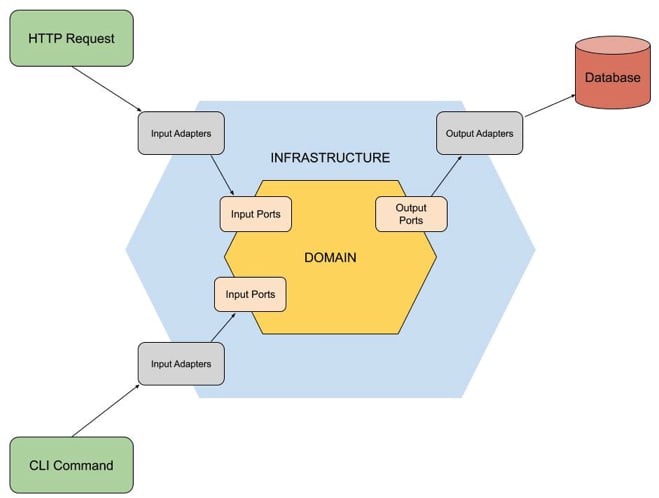 So in our PHP Application, we can have a structure like this: 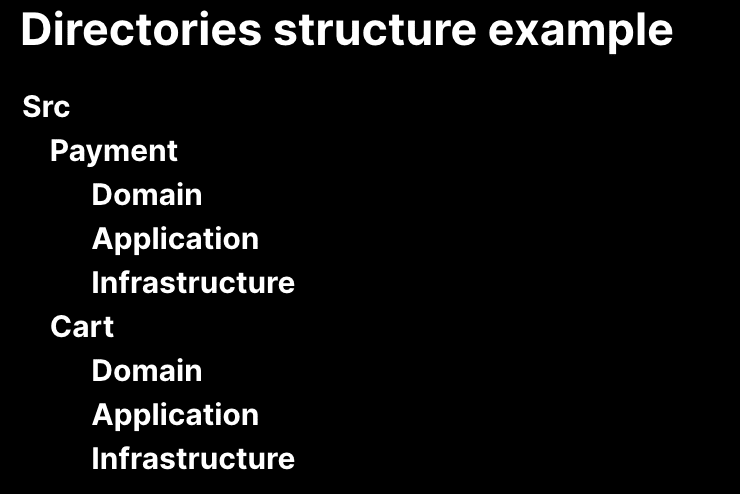 In your domain, you have your domain logic without reference to any vendors (not always true, for example usually in my domain I use Ramsey/UUID).
Inside this folder, you have also all the ports to specify how you want that data using objects.

In your application folder, you can have services and use cases.

In your infrastructure folder you can have framework code and adapters, so the implementation of domain ports using vendors and technology that you prefer. 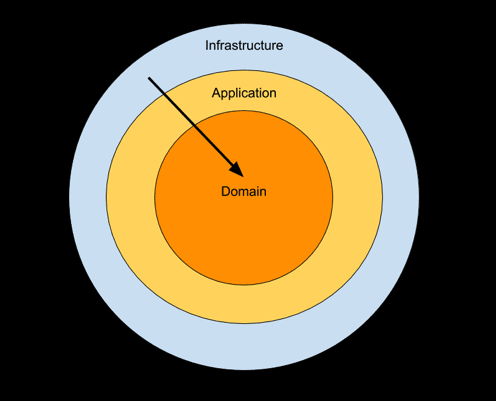 A domain class can’t depend on an infrastructure or application class.

There are a lot of advantages for me using hexagonal architecture like:

When to use it

At the moment I am trying to use this architecture always because when you start to think with this mindset it’s very difficult to come back.

How about legacy code without hexagonal architecture?

Usually, with a legacy application that doesn’t follow this architecture, I suggest to the team to start to try new things to make the domain and the code better and clear.

It starts with creating new directories like Infrastructure and domain.

Now new concepts and features could be developed into those directories.

With old features, if it’s possible and small I try to create pull requests to migrate little concepts with the new architecture.
When I migrate an old legacy piece of code I try to follow a golden rule that I love the boy scout rule:

Leave your code better than you found it.

To improve your domain and your code I can suggest using

All these concepts methodologies and approaches can improve again your projects.

8 Essential Questions to Ask Before Using a Laravel Package

Once suspended, minompi will not be able to comment or publish posts until their suspension is removed.

Once unsuspended, minompi will be able to comment and publish posts again.

Once unpublished, all posts by minompi will become hidden and only accessible to themselves.

If minompi is not suspended, they can still re-publish their posts from their dashboard.

Once unpublished, this post will become invisible to the public and only accessible to AlessandroMinoccheri.

Thanks for keeping DEV Community 👩‍💻👨‍💻 safe. Here is what you can do to flag minompi:

Unflagging minompi will restore default visibility to their posts.