[Check my articles on my blog here]

I will try to group here, in an anatomy atlas, basic notions of functional programming that I find myself explaining often lately into a series of articles.

The idea here is to have a place to point people needing explanations and to increase my own understanding of these subjects by trying to explain them the best I can.
I'll try to focus more on making the reader feel an intuition, a feeling about the concepts rather than on the perfect, strict correctness of my explanations.

What is a functor ?

There's a nice answer by Bartosz Milewski on Quora from which I'll keep some parts:

So what can you do with such a container? You might think that, at the minimum, you should be able to retrieve values. But each container has its own interface for accessing values. If you try to specify that interface, you're Balkanizing containers. You're splitting them into stacks, queues, smart pointers, futures, etc. So value retrieval is too specific.

It turns out that the most general way of interacting with a container is by modifying its contents using a function.

Let's try to rephrase that

So, to summarize, a functor is a kind of container that can be mapped over by a function.

But functors have to respect some rules, called functor's laws...

A quick note about functor / container parallel: the analogy is convenient to get the intuition, but not all functors will not fit into that model, keep it in a corner of you mind so that you're not taken off guard.

Along the next sections, the examples and code snippets I'll provide will be in Scala.

We're going to play with concrete containers of Int values to try to grasp the concept.

So we can observe that pattern we described earlier:

How do we abstract and encode that ability ?

Functors are usually represented by a type class.

As a reminder, a type class is a group of types that all provide the same abilities (interface), which make them part of the same class (group, "club") of same abilities providing types (see my article about type classes here.

This is the functor type class implementation:

To illustrate what it means in your Scala code let's make our UselessContainer a functor:

Be careful, if you attempt to create your own functor, it is not enough. You have to prove that your functor instance respects the functor's laws we stated earlier (usually via property based tests), hence that:

However, you can safely use functor instances brought to you by Cats or Scalaz because their implementations lawfulness are tested for you.

(You can find the Cats functor laws here and their tests here. They are tested with discipline.)

Now that you know what a functor is and how it's implemented in Scala, let's talk a bit about category theory !

An insight about the theory behind functors

During this article, we only talked about the most widely known kind of functors, the co-variant endofunctors. Don't mind the complicated name, they are all you need to know to begin having fun in functional programming.

However if you'd like to have a grasp a little bit of theory behind functors, keep on reading.

Functors are structure-preserving mappings between categories.

Category theory is the mathematical field that study how things relate to each others in general and how their relations compose.

A category is composed of: 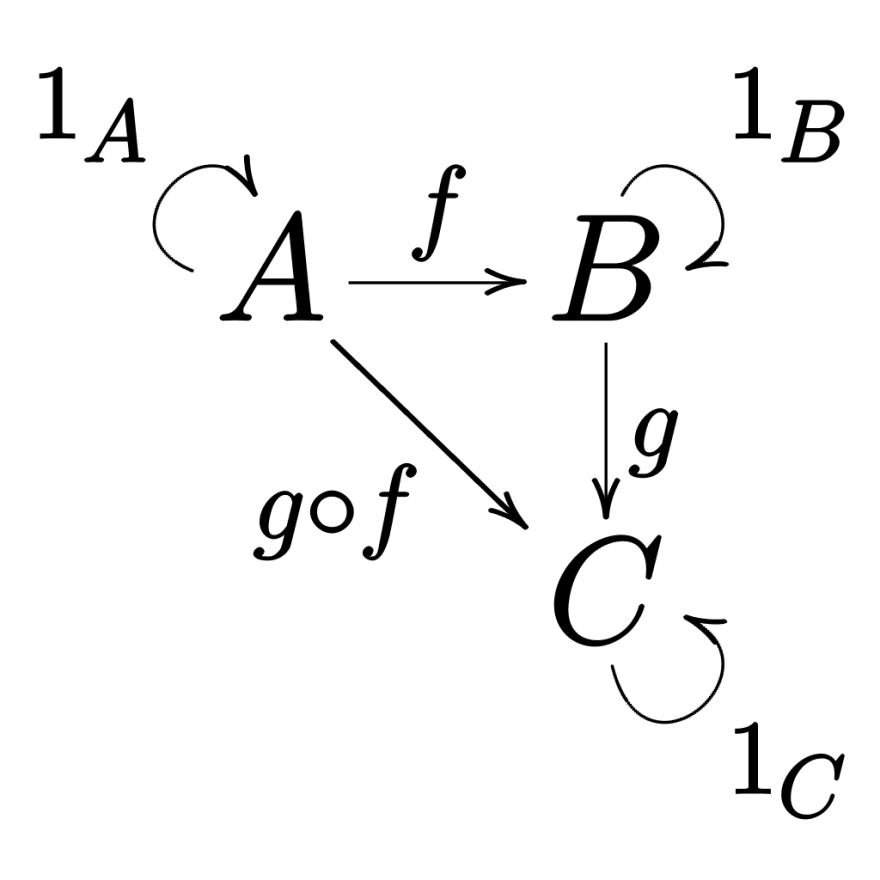 In the context of purely functional programming in Scala, we can consider that we work in a particular category that we are going to call it S (I won't go into theoretical compromises implied by that parallel, but there are some !):

Indeed, if we consider the object a (the type A) and the object b (the type B), Scala functions A => B are morphisms between a and b.

Given our morphism from a to b, if it exists an object c (the type C) and a morphism between b and c exists (a function B => C):

Moreover for every object (every type) it exists an identity morphism, the identity function, which is the type parametric function:

We can now grasp how category theory and purely functional programming can relate !

And then back to our functors

Now that you know what a category is, and that you know about the category S we work in when doing functional programming in Scala, re-think about it.

Since we always work with types and with functions between types in Scala, a functor in that context is a mapping from and to the same category, between S and S, and that particular kind of functor is called an endofunctor.

Let's explore how Option behaves (but we could have replaced Option by any functor F):

Let's use our previously defined:

We won't go into details but we could have shown how Option functor respects morphism composition and identity laws.

What does it buy us ?

In programming terms, (endo)functors in Scala allow us to move from origin types (A, B, ...), to new target types (F[A], F[B], ...) while safely allowing us to re-use the origin functions and their compositions on the target types.

To continue with our Option example, Option type constructor "map" our types A and B into Option[A] and Option[B] types while allowing us to re-use functions of type A => B thanks to Options' map, turning them into Option[A] => Option[B] and preserving their compositions.

But that is not over ! Let's leave abstraction world we all love so much and head back to concrete world.

Concrete functors instances enhance our origin types with new capacities. Indeed, functor instances are concrete data structures with particularities (the one we said we did not care about at the beginning of that article), the abilty to represent empty value for Option, the ability to suspend an effectful computation for IO, the ability to hold multiple values for List and so on !

Ok, so, to sum up, why functors are awesome ? The two main reasons I can think of are:

I hope I made a bit clearer what functors are in the context of category theory and how that translates to pure FP in Scala !

If you want to keep diving deeper, some interesting stuff can be found on my FP resources list and in particular:

I'll try to keep that blog post updated.
If there are any additions, imprecision or mistakes that I should correct or if you need more explanations, feel free to contact me on Twitter or by mail !

Edit: Thanks Jules Ivanic for the review :).

The Math of TypeScript's Types

Once suspended, mmenestret will not be able to comment or publish posts until their suspension is removed.

Once unsuspended, mmenestret will be able to comment and publish posts again.

Once unpublished, all posts by mmenestret will become hidden and only accessible to themselves.

If mmenestret is not suspended, they can still re-publish their posts from their dashboard.

Once unpublished, this post will become invisible to the public and only accessible to Menestret Martin.

Thanks for keeping DEV Community 👩‍💻👨‍💻 safe. Here is what you can do to flag mmenestret:

Unflagging mmenestret will restore default visibility to their posts.