TL;DR: In my career, I’ve built a lot of custom apps for internal users. Most of these apps have similar repetitive components like data grids, user management, DB integrations, or API integrations. So I decided to build Appsmith, a frontend-as-a-service product that lets you build a custom web app for internal users very quickly. Sign up for the alpha release here: www.appsmith.com

In 2018, I built a mobile game that went viral. The daily user count jumped from 1000 daily users to 100K daily users in three weeks. Everything was on fire! This growth increased customer support requests by 100x and I had to scramble to build internal apps that enabled the team to solve customer issues quickly. While building these apps, I wondered why it still wasn’t easy for a backend developer like me to build an app for internal users. Why is it that a marketing lead can spin up a website without knowing HTML, CSS or React, but backend developers like me need to learn React, Webpack, Flexbox just to spin up a simple app? Why should only full-stack devs have all the fun? Most of these apps have similar components such as data grids, charts, authentication, and user management. Shouldn’t it be easy to reuse components?

I’ve seen, first hand, how the right tools make a disproportionate difference to a company’s success. But there are also many challenges developers face while building these internal apps and many things stand in the way of building what business users actually need. And that’s why I started Appsmith.

Here's a snapshot of the product: 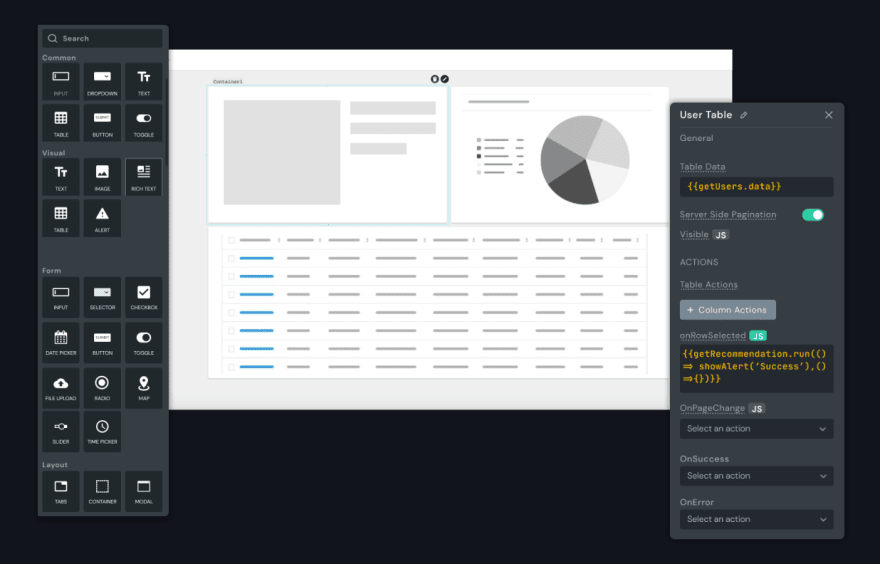 We are making the process of building custom apps easy for developers by focusing on:

No more CSS madness: Appsmith ships with UI components like data grid, charts, buttons, forms, maps, and many more, which can be configured without needing to deal with CSS. As a backend developer, I struggle with CSS. In the past, I used to default to using pre-built admin panels such as React Admin, Bootstrap Admin, etc. But, I got stuck the moment they needed to be customized (and they always needed to be customized). The ability to modify a pre-built panel easily is a super-power that’s built into the Appsmith platform. You can also add your Python/JS code to extend existing functionalities easily without mucking around with HTML/CSS.

Self-Hosted: Appsmith is designed to be a self-hosted solution that you can easily deploy on a cloud instance inside your VPC/VPN. Internal applications often deal with sensitive information such as payment information, and user data. Keep your data secure and never have to expose your databases or private APIs to a whitelisted IP in the cloud.

Embeddable UI: Mature teams already have lots of legacy applications powering their business. As engineers, we all abhor the dreaded re-write. Applications built on Appsmith are designed to be embeddable into existing custom apps. You can build an entire application, only a page or even just an embeddable widget. This means that you can start leveraging Appsmith immediately in your current product.

Collaboration with business/ops folks: Every internal app would be better if engineers could collaborate with business users during the development process. A lot of communication happens around internal apps. Business users are constantly reaching out to developers about bugs, change requests, “how do I do this?” queries, service escalations and more. All of this happens today over email and Slack with a plethora of back and forth involving screenshots and video recordings. When products like Google Docs, or Figma let you comment inline with all the context, why shouldn't you be able to do this in your custom applications?
Appsmith brings the conversation inside internal apps so that communication can happen with context.

Pre-built authentication and authorization flows: These flows are the bedrock of all applications. As engineers, we keep writing them from scratch for every project. In an effort to DRY (Don't Repeat Yourself), we've built authentication and authorization workflows into the product. Appsmith ships with granular access permissions that can be assigned to any user. You can also configure user sign up and approval workflows without any hassles. Once these workflows are set up, as a developer, get out of the way and let the business managers handle this process.

Performance: Internal applications can be notoriously slow or hog too much RAM/CPU. I've often been a victim of pages loading slowly and each button click taking an eternity to complete. Appsmith is built for performance. Like a CDN, you can cache the results of your DB queries and backend API calls and create blazing fast apps without increasing the load on your systems.

Integrations done right: Appsmith has integrated with multiple databases such as MySQL, PostgreSQL, MongoDB, Redis (coming soon) to allow applications to communicate directly with them. Additionally, every new DB will be supported quickly. Hence, all integrations are designed as plugins that you can write independently as well. Just implement a class, upload it to your Appsmith account and start using it. Out-of-the-box integrations with hundreds of SaaS products are also available. You no longer have to hunt for API documentation or integrate manually. DRY all the way.

Appsmith has been built with empathy, not just ❤️. After building in silence for nearly seven months, today the private alpha is open to developers. If you’d like to get a sneak peek into what’s getting built, sign up here: appsmith.com. I would love to hear your thoughts, comments, and feedback. As Frasier would say “I’m listening”.

For a live demo, schedule a call with me on https://calendly.com/arpit-appsmith/30min

Once suspended, mohanarpit will not be able to comment or publish posts until their suspension is removed.

Once unsuspended, mohanarpit will be able to comment and publish posts again.

Once unpublished, all posts by mohanarpit will become hidden and only accessible to themselves.

If mohanarpit is not suspended, they can still re-publish their posts from their dashboard.

Once unpublished, this post will become invisible to the public and only accessible to Arpit Mohan.

Thanks for keeping DEV Community 👩‍💻👨‍💻 safe. Here is what you can do to flag mohanarpit:

Unflagging mohanarpit will restore default visibility to their posts.