Cypress is an awesome E2E testing framework made to be consistent, fast and easy to use. It is built from scratch so no Selenium. I recently tried it and I found Cypress to be super easy to setup and get started. It was easy to write tests and it really feels fast and solid. Cypress also comes with a great test runner site where you can see your test run live as well as debug tests and much much more.

What we will go through in this article:

What and why E2E test?

Testing is all about quality. We want to make sure that our web apps don't contain bugs. Unit testing tests as small parts as possible and testing all the edge cases. E2E testing, on the other hand, tests the whole functionality, from GUI to API and back. In E2E tests, we usually stick to the happy paths, since we covered all the edge cases in our unit tests.

My definition of E2E testing for web apps:

We are testing the application automatically in the browser to make sure that all functionality holds together and stays consistent and correct as the application evolves. I usually see one E2E test as testing one flow in a user story, the E2E test should take the same steps as when testing a user story manually and produce the same end result.

When E2E testing, it doesn't really matter which framework we use. Consider the web app as a black box that we test through the GUI.

What we will test in this article

The test examples in this article will be based on one view from my weather application, which looks like this.

Cypress is an E2E testing framework. It is built from scratch to reduce inconsistent results and improve speed. It works for both unit, integration and E2E tests. It's free, open-source, has a test runner locally installed and a dashboard service for recording test runs.

The focus of Cypress is to make it easy to setup Cypress and easy to write, run and debug tests. I really think that Cypress has succeeded with these parts, it's really easy to get going and it's almost as easy to write unit tests with jest as to write E2E tests with Cypress.

Cypress only supports Chrome of the major browser in the current stage, but they are working on cross-browser support for Firefox, Edge and IE11.

Cypress has a lot of awesome features. From an E2E perspective, the main features are:

Cypress comes with mocha and chai as the testing framework, so everything is setup and ready to get started.
One of the features mentioned is automatic awaiting. This is really awesome since we now never have to check if an element is in the DOM or perform setTimeout and hope that the element has shown up. Cypress commands automatically waits for the command to be completed and when it's finished it goes to the next command in the test. If the Cypress command isn't finished after 5 seconds, the test will fail.

For Cypress to use automatic awaiting, all Cypress commands are asynchronous, but they are run synchronously.

In this example, both get() and click() are asynchronous commands, but get() must be finished before the click command can be run. So each command is like a promise that has to be completed before running the next command.

Why Cypress tests are more reliable?

Cypress has done it very easy for us to get up and running. First, install Cypress:

This will download everything Cypress needs. After that just open Cypress:

First time this command is run, Cypress will setup everything for you to start writing E2E tests. Cypress also includes an example folder with many valuable examples and tips.

The Cypress run command will run the tests in the terminal, which is useful on the CI for example.

After setting up Cypress we can start writing E2E tests. So let's look at how an E2E test can look. In this test, we want to check that the main temperature changes when selecting one of the items in the forecast list.

Note that cypress commands are Promise like, but not exactly a Promise. So we can use then for triggering a callback when the command is finished, but we cannot use async/await.

Mocking is a great way to get control over certain aspects of the app. Even if we are testing a black box, it's very useful to for instance get control over the API or the geolocation, so we can focus some E2E tests on other aspects.

In Cypress, we mock by using stubs.

So, for example, we can stub fetch for certain tests.

This way we can make sure that our app presents exactly the correct information given a certain response from the API.

Stubs should be located in the onBeforeLoad, which makes the stubs available in the current visit of localhost.

Here is another stub, where we want the geolocation to be the center of Stockholm, Sweden. This way when running this test, we will always fetch the weather for Stockholm no matter where this test is run.

When to mock and when to not?

It's really nice to be able to mock certain things and knowing what to expect in return. Though we shouldn't always mock, it should be a good mix. First, write a few E2E tests without stubs if possible. So we first test all the way from end to end and make sure that all integrations work. Then we can start using stubs to make sure our GUI presents exactly the correct information.

Here is the full test of when we mock fetch to test that our GUI presents correct information. In this test, we use the contain command, which checks if the fetched element contains the input value. This command works both for a specific element and for a container of elements.

Cypress comes with an awesome test runner. This is a really great tool and has many features. It's in the test runner that we see our test runs, debug our tests and see that our tests take the correct path through the application. The test runner runs in a chrome instance and thereby giving access to chrome devtools for debugging. 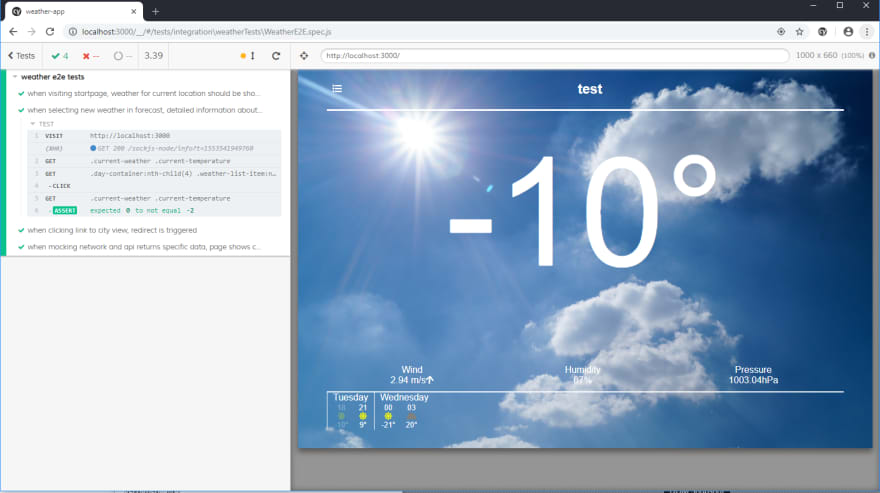 So here is a print of one set of E2E tests. We can run all the tests from here and also open chrome devtools to inspect elements or debug our web app.

Here is a GIF of me inspecting an E2E test. When hovering on different steps in the E2E test, the test runner visualizes which element the Cypress command affects. It also shows which state the GUI was in at each step in a test. This is what Cypress call time travel, we can travel through each step of an E2E test and see how the GUI looked at each step. This is awesome for debugging and just to see that our GUI behaves as expected. Notice also that when hovering on the click event, the test runner shows the before and after of that click.

That is all for this article. Hope you enjoyed it and that I inspired you to try out Cypress for E2E testing.
In this article, we first looked at what E2E testing is. Then we talked about some of the features in Cypress and went deeper into setup, stubs, how to write E2E tests and the test runner with time travel in the end.

If you want to read more about Cypress, they have great docs at Cypress.io with examples and guides for how to write E2E tests.

If you want to see the whole weather app it is live at GitHub pages. If you are interested in seeing more of my E2E tests, the project is available on my GitHub.

Once suspended, mstamstrom will not be able to comment or publish posts until their suspension is removed.

Once unsuspended, mstamstrom will be able to comment and publish posts again.

Once unpublished, all posts by mstamstrom will become hidden and only accessible to themselves.

If mstamstrom is not suspended, they can still re-publish their posts from their dashboard.