When it comes to React, following are some of the ways of styling in React.

In this article, we will explore how to use CSS Modules.

What is a CSS module?

In short, all the CSS declared in the file are local to the file in which this CSS file is imported.

We will use CSS modules in the context of React but they are not limited to just React.

You can use the CSS modules with any module bundler like webpack or browserify or any other way which supports importing CSS files.

An alternative to CSS modules in React to create local scope is to use styled components.

CSS Modules are the preferred way of styling in Gatsby.js and Next.js.

Why do we need to use the CSS Module?

In the React application, we usually create a single .css file and import it to the main file so the CSS will be applied to all the components.

But using CSS modules helps to create separate CSS files for each component and is local to that particular file and avoids class name collision.

That's enough about the Introduction. Let's see how to use it.

CSS modules support is provided by create-react-app out-of-the-box so we don't need to install or configure anything to get it working.

When working with React, it's a convention to name the CSS file with .module.css extension.

Suppose, we have a header.module.css file in the components folder with the following content:

then in the components/Header.js file, we import this file in the following way:

Check out the preview for the above code sandbox here.

If you check the preview above, you will see that even though we have given as title as the class for h1, the final CSS class is different when displayed in the browser. 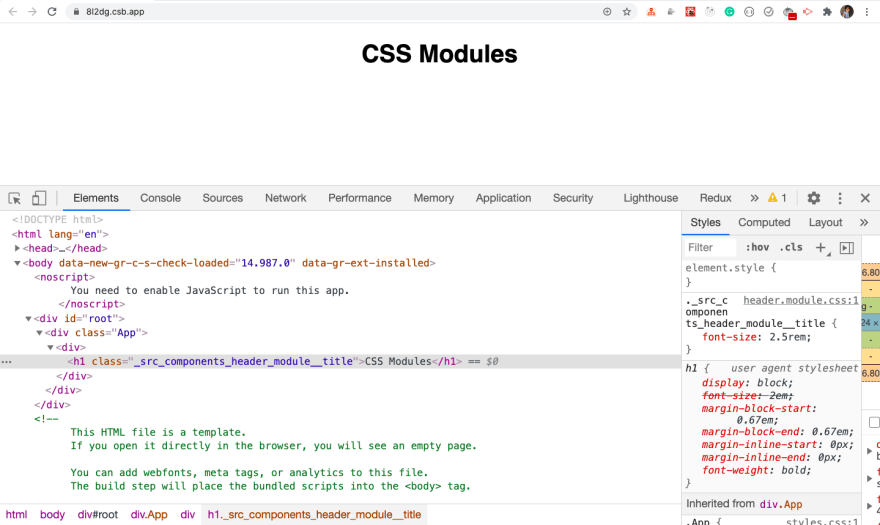 So CSS Modules helps to create random classes when displayed in the browser.

It's common to name a CSS class with hyphen like menu-items.

So to use that class inside components we need to use the bracket notation like this:

Then to use both of these classes for the same element we need to use the ES6 template literal syntax like this:

You can find the complete GitHub source code for this article in this repository.

Don't forget to subscribe to get my weekly newsletter with amazing tips, tricks, and articles directly in your inbox here.