You may have already heard about this, but Visual Studio Codespaces will be soon retired in favor of GitHub Codespaces. This means we have to migrate to it to continue to use this awesome online development environment.

Today we are going to explore 3 ways to migrate from Visual Studio Codespaces to GitHub Codespaces.

If you have been using Visual Studio Codespaces before, you've probably received this email. 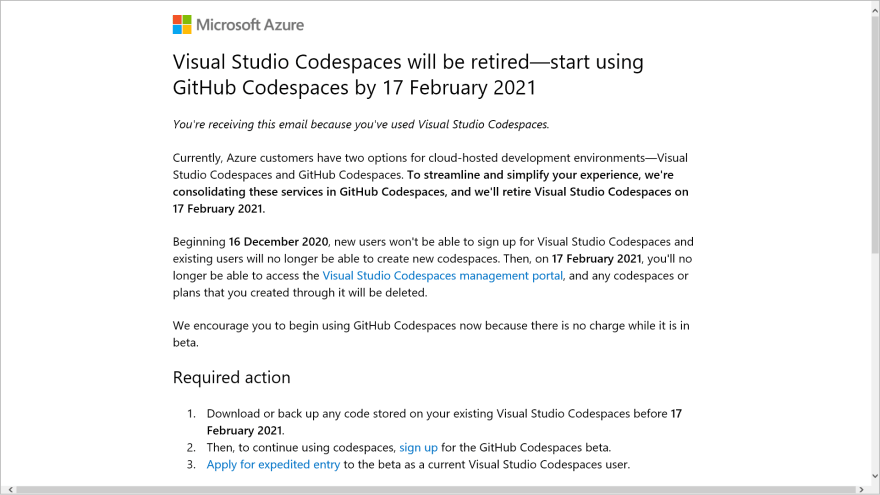 Soon you won't be able to create new Visual Studio Codespaces environments and in February 2021 we will not be able to access the service anymore, and any Codespaces or plans that you created through it will be deleted.

It's time to migrate

I will also give you a timeline, and few extra information about the whole move.

If you are a visual learner, or simply prefer to watch and listen instead of reading, here you have the video with the whole explanation and demo, which to be fair is much more complete than this post.

(Link to the video: https://youtu.be/u0J4YQhiiFI)

Let's talk about the timeline first.

GitHub Codespaces are already available in beta since September 4, so maybe you already have it enabled or, if not, you can ask for entering the beta.

Starting on November 20, 2020 we will not be able to create new plans and new environments, and new users won't be able to sing up for the service. At this stage, however, existing Codespaces environments will still be working.

Finally, on February 17, 2021 the service will be retired. This means that you will not be able to access the portal anymore and the existing environments will be deleted.

Even though we still have few months to migrate from VS Codespaces to GitHub Codespaces, I'd recommend moving as soon as possible, for 2 reasons:

Alright, so how can we migrate from Visual Studio Codespaces to GitHub Codespaces?

But we have 3 ways to do it, let's go through each one of these.

The first way is obviously from scratch. This is probably the simplest way but also the most time-consuming one.

As you can see, this will be quite time consuming.

The second way we have for moving our Visual Studio Codespaces environment to GitHub is by exporting and downloading the actual environment.

You would need VS Code with the Codespaces extension to do this.

In the Codespaces view:

Remember that the environment needs to be suspended, if it is not VS Code will ask and suspend it before it can proceed.

This will download your whole Codespaces environment workspace. And this includes all the customizations you've made, and all the changes you have done to your application that you may not have yet pushed to the remote repository.

In fact if we compare the source repo with the content of the exported Codespaces workspace we can see that the latter contains files and especially settings and customizations that are not present in the remote repo.

Now all I have to do is create a new repo, upload (aka push) the files I've just downloaded and my GitHub Codespaces environment will be complete with all the settings and customizations I had before in the Visual Studio Codespaces one.

This is somehow similar to the previous one, with the difference that we don't need to download the files and re-upload them to GitHub. Git can do this for us.

First, you need to have an empty GitHub repo. It should be not initialized for this to work.

Then, in your Codespaces environment you can access the Terminal and just add a new origin to your workspace:

Since the workspace contains all the customizations and settings, now we have all the files in here, and we can spin up a new Codespaces environment from here.

Will you be migrating to GitHub Codespaces anytime soon?

Let me know in the comment section below if you can think of any other way to do the migration.

Encourage Community with a Good ReadMe