Machine learning (ML) and deep learning (DL) techniques are being applied in a variety of fields, and data scientists are being sought after in many different industries.

With machine learning, we identify the processes through which we gain knowledge that is not readily apparent from data in order to make decisions. Applications of machine learning techniques may vary greatly, and are found in disciplines as diverse as medicine, finance, and advertising.

Deep learning makes use of more advanced neural networks than those used during the 1980s. This is not only a result of recent developments in the theory, but also advancements in computer hardware.

In this crash course, we will learn about deep learning and deep neural networks (DNNs), that is, neural networks with multiple hidden layers. We will cover the following topics:

This crash course is adapted from Next Tech's Python Deep Learning Projects (Part 1: The Fundamentals) course, which explores the basics of deep learning, setting up a DL environment, and building an MLP. It includes an in-browser sandboxed environment with all the necessary software and libraries pre-installed. You can get started here!

Given the universal approximation theorem, you may wonder what the point of using more than one hidden layer is. This is in no way a naive question, and for a long time neural networks were used in this way.

One reason for multiple hidden layers is that approximating a complex function might require a huge number of neurons in the hidden layer, making it impractical to use. A more important reason for using deep networks, which is not directly related to the number of hidden layers but to the level of learning, is that a deep network does not simply learn to predict output Y given input X: it also understands basic features of the input.

Let’s take a look at an example.

In Proceedings of the International Conference on Machine Learning (ICML) (2009) by H. Lee, R. Grosse, R. Ranganath, and A. Ng, the authors train a neural network with pictures of different categories of either objects or animals. In the following image we can see how the different layers of the network learn different characteristics of the input data. In the first layer the network learns to detect some basic features, such as lines and edges, which are common to all images in all categories:

In the next layers, shown in the image below, it combines those lines and edges to compose more complex features that are specific to each category.

In the top row we can see how the network detects different features of each category. Eyes, noses, and mouths for human faces, doors and wheels for cars, and so on. These features are abstract. That is, the network has learned the generic shape of a feature, such as a mouth or a nose, and can detect this feature in the input data despite variations it might have.

In the second row of the preceding image, we can see how the deeper layers of the network combines these features into even more complex ones, such as faces and whole cars. A strength of deep neural networks is that they can learn these high-level abstract representations themselves by deducing them from the training data.

We could define deep learning as a class of machine learning techniques where information is processed in hierarchical layers to understand representations and features from data in increasing levels of complexity. In practice, all deep learning algorithms are neural networks, which share some common basic properties. They all consist of interconnected neurons that are organized in layers. Where they differ is network architecture (the way neurons are organized in the network), and sometimes the way they are trained.

With that in mind, let's look at the main classes of neural networks. The following list is not exhaustive, but it represents the vast majority of algorithms in use today.

A neural network with feedforward propagation, fully-connected layers, and at least one hidden layer. 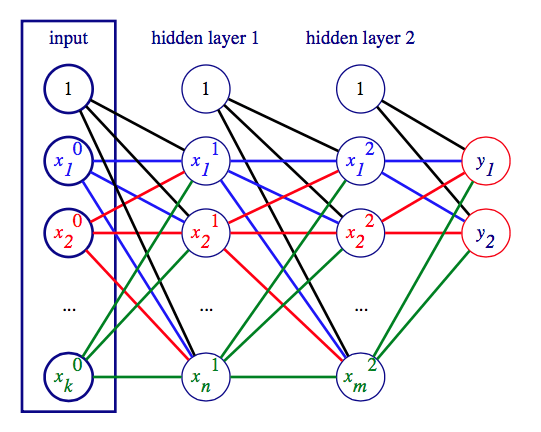 A CNN is a feedforward neural network with several types of special layers. For example, convolutional layers apply a filter to the input image (or sound) by sliding that filter all across the incoming signal, to produce an n-dimensional activation map. There is some evidence that neurons in CNNs are organized similarly to how biological cells are organized in the visual cortex of the brain. Today, they outperform all other ML algorithms on a large number of computer vision and natural language processing tasks.

This type of network has an internal state (or memory), which is based on all or part of the input data already fed to the network. The output of a recurrent network is a combination of its internal state (memory of previous inputs) and the latest input sample. At the same time, the internal state changes, to incorporate newly input data. Because of these properties, recurrent networks are good candidates for tasks that work on sequential data, such as text or time-series data.

A class of unsupervised learning algorithms, in which the output shape is the same as the input, that allows the network to better learn basic representations. It consists of an input, hidden (or bottleneck), and output layers. Although it's a single network, we can think of it as a virtual composition of two components:

Reinforcement algorithms learn how to achieve a complex objective over many steps by using penalties when they make a wrong decision and rewards when they make a correct decision. It is a method often used to teach a machine how to interact with an environment, similar to the way a human behaviour is shaped by negative and positive feedback. RL is often used in building computer games and autonomous vehicles.

Machine learning, particularly deep learning, is producing more and more astonishing results in terms of the quality of predictions, feature detection, and classification. Many of these recent results have even made the news! Here are a just a few of the ways that these techniques can be applied today or in the near future:

Nowadays, new cars have a suite of safety and convenience features that aim to make the driving experience safer and less stressful. One such feature is automated emergency braking if the car sees an obstacle. Another one is lane-keeping assist, which allows the vehicle to stay in its current lane without the driver needing to make corrections with the steering wheel. To recognize lane markings, other vehicles, pedestrians, and cyclists, these systems use a forward-facing camera. We can speculate that future autonomous vehicles will also use deep networks for computer vision.

Both Google's Vision API and Amazon's Rekognition service use deep learning models to provide various computer vision capabilities. These include recognizing and detecting objects and scenes in images, text recognition, face recognition, and so on.

Medical imaging is an umbrella term for various non-invasive methods of creating visual representations of the inside of the body. Some of these include Magnetic resonance images (MRIs), ultrasound, Computed Axial Tomography (CAT) scans, X-rays, and histology images. Typically, such an image is analyzed by a medical professional to determine the patient's condition. Machine learning, computer vision in particular, is enabling computer-aided diagnosis which can help specialists by detecting and highlighting important features of images.

For example, to determine the degree of malignancy of colon cancer a pathologist would have to analyze the morphology of the glands using histology imaging. This is a challenging task because morphology can vary greatly. A deep neural network could segment the glands from the image automatically, leaving the pathologist to verify the results. This would reduce the time needed for analysis, making it cheaper and more accessible.

Another medical area that could benefit from deep learning is the analysis of medical history records. Before a doctor diagnoses a condition and prescribes treatment they consult the patient's medical history for additional insight. A deep learning algorithm could extract the most relevant and important information from those extensive records, even if they are handwritten. In this way the doctor's job can be made easier while also reducing the risk of errors.

Google Duplex is another impressive real-world demonstration of deep learning. It's a new system that can carry out natural conversations over the phone. For example, it can make restaurant reservations on a user's behalf. It uses deep neural networks to both to understand the conversation and to generate realistic, human-like replies.

Finally, AlphaGo is an artificial intelligence (AI) machine based on deep learning, that made the news in March 2016 for beating the world Go champion, Lee Sedol. AlphaGo had already made the news in January 2016, when it beat the European champion, Fan Hui. Although, at the time, it seemed unlikely that it could go on to beat the world champion. Fast-forward a couple of months and AlphaGo was able to achieve this remarkable feat by sweeping its opponent in a 4-1 victory series.

This was an important milestone because Go has many more possible game variations than other games, such as chess, and it's impossible to consider every possible move in advance. Also, unlike chess, in Go it's very difficult to even judge the current position or value of a single stone on the board. In 2017, DeepMind released an updated version of AlphaGo called AlphaZero.

In this crash course, we explained what deep learning is and how it's related to deep neural networks. We discussed the different types of networks and some real-world applications of deep learning.

This is only the beginning — if you’d like to learn more about deep learning, Next Tech has a Python Deep Learning Projects series that explores real-world deep learning projects across computer vision, natural language processing (NLP), and image processing. Part 1 of the series covers setting up a DL environment and building an MLP. You can get started here.

Once suspended, nexttech will not be able to comment or publish posts until their suspension is removed.

Once unsuspended, nexttech will be able to comment and publish posts again.

Once unpublished, all posts by nexttech will become hidden and only accessible to themselves.

If nexttech is not suspended, they can still re-publish their posts from their dashboard.

Once unpublished, this post will become invisible to the public and only accessible to Lorraine.

Thanks for keeping DEV Community 👩‍💻👨‍💻 safe. Here is what you can do to flag nexttech:

Unflagging nexttech will restore default visibility to their posts.