I'm half-seriously making a game about spaceships landing in a hangar. 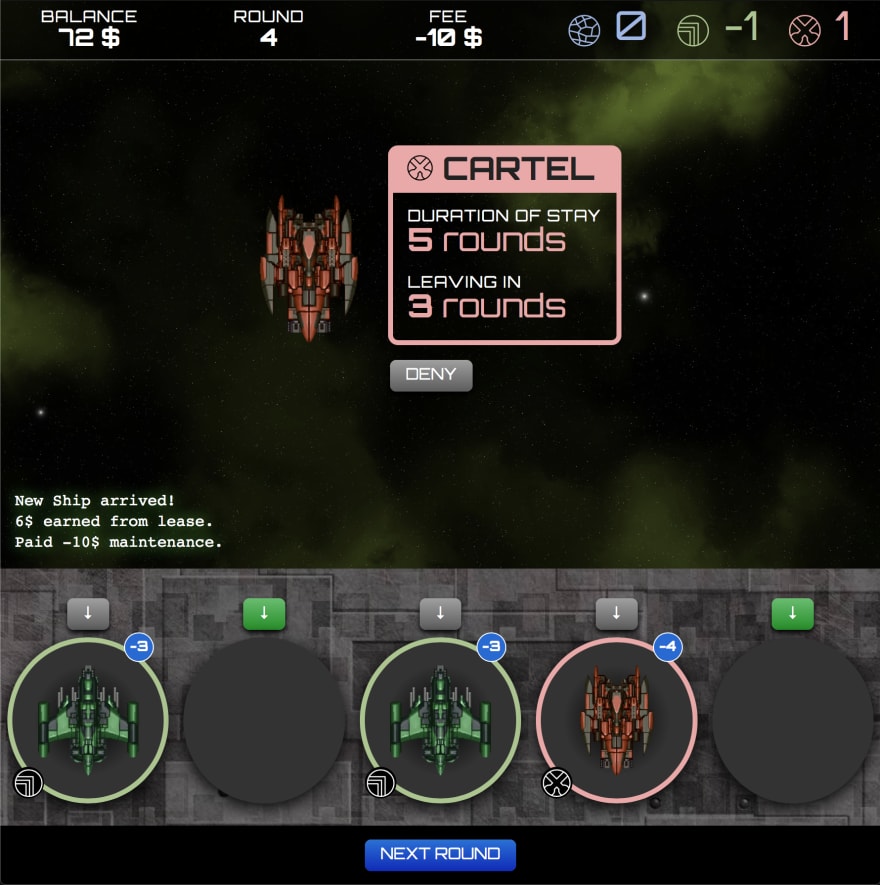 It's primarily a way of learning Elixir and Phoenix. I want to make something fun with this, though. It's still kind of boring and hard to understand.

The player is the person responsible for placing the ships strategically, in order to keep their reputation with the fractions (Police, Corporations, Cartel) as high as possible. Better reputation means more income from the platform-lease. The player pays a fixed maintenance-cost each round. The goal is to not run out of money.

The current issue is, that everything is still too balanced, in a sense that I can just focus on improving reputation with one fraction and ignore the rest. The fractions have no special effects.

That's why I introduced the restriction that you can't place the cartel on each platform, because if there's nobody stopping them, they will take over the hangar. I'm thinking currently about effects like those for the other fractions.

Those could be that reputation can't fall below a certain treshold, otherwise they will just stop coming, and you'll have fewer ships to make money from. Or the police could stop paying lease if they don't like you.

On the technical side, the whole thing is an Elixir-App with a Phoenix-based front-end. It works really well and is fun to develop. Right now, every player-action is a form-submit. There's no JS yet. It's amazing how far you can get with CSS-animations. I want to use Live-View at some point, though.

Once suspended, niorad will not be able to comment or publish posts until their suspension is removed.

Once unsuspended, niorad will be able to comment and publish posts again.

Once unpublished, all posts by niorad will become hidden and only accessible to themselves.

If niorad is not suspended, they can still re-publish their posts from their dashboard.

Once unpublished, this post will become invisible to the public and only accessible to Antonio Radovcic.

Thanks for keeping DEV Community safe. Here is what you can do to flag niorad:

Unflagging niorad will restore default visibility to their posts.