This is going to be a long read. And even then, it does not cover the half of what I really wanted to say, but couldn’t find words for. It’s a stream of consciousness postâ€Š–â€ŠI’ll probably get back to this later to edit it for readability but I wanted to write it while I still *felt* it. You want to grab a cup of tea and settle in? Go ahead .. I’ll wait.

I’ve been in tech for 20+ years and done my fair share of public speaking at various industry, academic, developer & internal conferences and events.

But I’ve always focused on doing technology talks and scrupulously avoided speaking about the people powering it â€Š–â€Šabout the challenges, solutions & opportunities faced by tech workers, and about the very human toll exerted by the inhuman pace of a rapidly-evolving ecosystem.

On October 28, 2017â€Š–â€ŠI gave my first talk at ElaConf 2017 in Philadelphia. You can see the agenda here and learn about my talk focus here. And yes, it was something I had dreamed of doing for quite a while. And the reality far exceeded my expectations in every way.

This is momentous. No kidding!
1. I'm checking an item on my bucket list (speak at @elaconf)
2. I'm talking… twitter.com/i/web/status/9…
ela @elaconf

But I’ll get to all that in a minute. As they say, before I can talk about that, I first need to talk about this.

This is ElaConf. On the site, the organizers set out their goals clearly :

A safe, inclusive tech leadership conference and community for adult (18+) women (cis and trans), trans men, and genderqueer people to connect with and empower one another.

But that does not do it justice. This is actually how I felt about ElaConf when I left just 36 hours after I first arrived in Philadelphia.

ElaConf is a community that makes you feel valued, welcomed and visible. And that trifecta is the ultimate expression of “belonging”â€Š–â€Šof feeling like you fit in just minutes after you walk into a room full of strangers.> It is the microcosm of what our diverse tech community should be. You come in with baggage but leave feeling that load was lightenedâ€Š–â€Šnot because it went away, but because there were now many invisible hands lifting it with you.

It was in the little thingsâ€Š–â€Šstickers for self-expression (emojis FTW), gender pronouns to embrace true identity, code of conduct that emphasized safety, a recurring feeling of “it’s okay to stumble –you got this! & we got you! from an entire audience, an MC (the fabulous @theonlyruthie) who crafted segues for each speaker with such care that you didn’t realize it was the intro until you had already connected with the narrative of that talk.

It was about community at its very best, and about sharing your story and speaking your truths at its core. And hearing those stories shifted something in me that I had not realized was there. It made me feel human again. That we were all connected by tech, yesâ€Š–â€Šbut tech was not the thing that defined us. Rather, there is something remarkably powerful about lived experiences & hearing from people who are like you, and yet not like you.

This is just the tip of the iceberg –I got to attend a lot of talks, meet a lot of people, and have a lot of meaningful exchanges. I have not named people who were non-speakers, only because I want to make sure they are okay with it and that I had the context rightâ€Š–â€Šhopefully I can circle back to them later and if they approve, update it to reflect their identities. Because they are all worth knowingâ€Š–â€Štheir honestly is compelling and their warmth genuine.

“Being vulnerable with myself helped me start healing my own pain... to heal we must face the truth” #ElaConf… twitter.com/i/web/status/9…

The message from the keynote speaker (@zalyndria) was a powerful one about _defining success on your own termsâ€Š–â€Š_at its core, it had a simple fact. “Trauma persists in silence and to truly succeed, we need to face our pain boldly. Own it. Accept that things happened but that you survived. Tell your truths without filters. Only then can you truly move forward with hope.

It occurred to me that in 2017, this has been the core of our healing as a nation, as women, as minorities. More people are stepping up to speak courageous truths about bias, and inequality, and harassment.

But as an aside, one historical aspect of @zalyndria talk shook me. I had always championed education as the best tool to conquer hate, low esteem or injustice. I’d told myself that through learning, we were better equipped to cope with things we couldn’t change & positively impact the things we could. But what if education was used as a tool for forced assimilation? To replace or eradicate one culture’s norms and values, with that of another? What does that mean for personal identity? I had never ever thought about it. Now I do.

2. We are ALL privileged in some contexts and are minorities in others. Knowing context is key. Extending your privilege when you can, is vital. 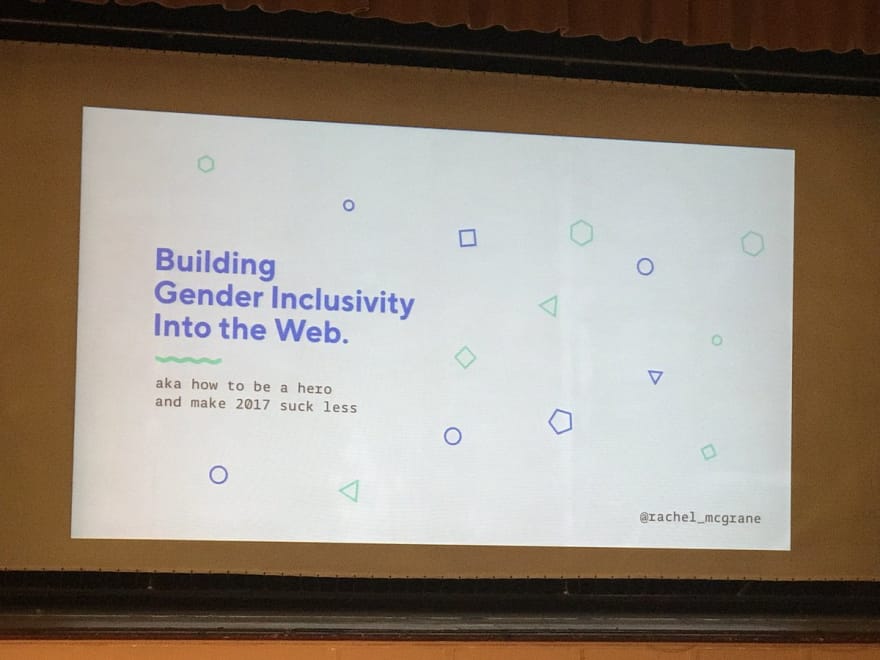 Next up is @rachel_mcgrane with gender and specifically trans inclusivity on the web!

I am a South Indian by birth, an American by naturalized citizenship. I have a PhD, run multiple tech communities, organize & speak at tech conferences, have 10+ patents, worked in tech for over two decades in multiple roles, on diverse platforms, with multi-disciplinary teams, am a polyglot & autodidact.

And yet, by many measures, I can be viewed as part of the under-represented minority in tech.

To be fair, I have been quite oblivious to this for years. It’s not that I hadn’t faced related challenges, denials, inequalities or dismissiveness. It’s that I was brought up to think that was par for the course. The world was tough. Life wasn’t fair. If you just worked hard, compromised, persevered and followed through, then you would be rewarded. So be humble & don’t waste time or energy complaining. But that’s another story.

The point wasâ€Š–â€Š I was at least visible. I had an established identity in terms of the boxes I could check on the various forms I’ve filled in our bureaucracy-heavy world. Gender was a no-brainer and it was on nearly EVERY form.

. And @rachel_mcgrane talk on "Building gender inclusivity into the web" made me *THINK*. How can the web be "open"… twitter.com/i/web/status/9…

It was a shock to my system that for so many people (@rachel_mcgrane mentioned 6% of Americans) it is something they have to think and worry about every minute. In a digital world where checkboxes dominate, this is emotional burden at its worstâ€Š–â€Šbecause there is no escape & limited control. She humorously noted that IE10 had ~0.6% adoption but had more people putting time & money into supporting that (legacy) need while the 10X need of gender-inclusivity was not even a blip on most companies’ radars.

And I realized that here I was absolutely privileged. I had never had to think about it. And here’s the thingâ€Š–â€Šthe solution is easy (“let’s improve the UI/UX by treating inclusivity like we did accessibilityâ€Š–â€Šas a core need) but the adoption is hard (there are billions of legacy+new pages/forms in digital and physical spaces) and most importantly awareness is lacking to enforce change.

I was blown away by this talk not only because it opened my eyes to the issue, but because it was actually one where I felt I could at least enforce change in some small way, by incorporating best practices or sharing this with others. I am not quite sure what form this may take but in 2018, I want to spend more time educating myself & exploring this in some actionable way. And for that I give huge props to @rachel_mcgraneâ€Š–â€Šthis was an amazing talk!

Wowâ€Š–â€Šthere is so much I want to say that I think I’ve run out of time today. I think I’ll defer other things to a Part 2 .. watch this space for updated links.

PhD & Polyglot / I want to help translate awareness of technology into actionable learning with impact on career or software development. / Try-Fail-Learn

Maintaining an open source gem in the Hacktoberfest

What's up with the pronouns?

My GitHub Campus Expert Journey and how you can become one