Recently I wrote a couple of spontaneous threads on Twitter that became the most-viewed of my posts in over a decade. They focused on learning. The first inspired me to convert the tweets into a series of personal essays to support deeper conversations on those topics.

Today I'm converting the second thread into a post for the series. You can click the tweet below to read the thread on Twitter or just scroll down to read it in paragraph form. (The bonus of writing this on dev.to is that I can actually fix those pesky typos in my tweets!) 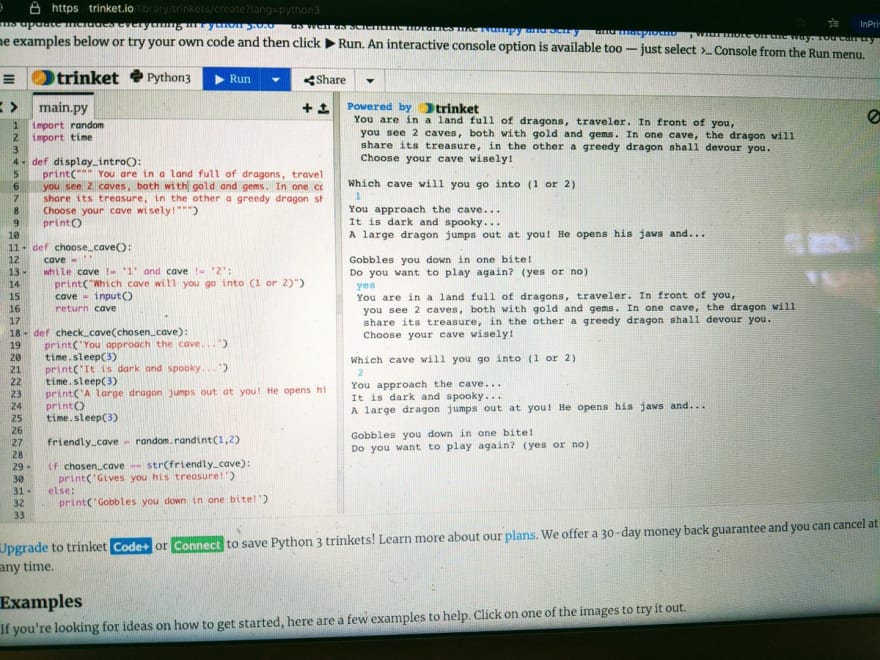 It's never too late to learn something and never too eat to share knowledge with others.

My 11yo is getting more into Python so I decided to do (separately) the same intro Udacity course and be a study buddy.

And something interesting happened.

The original thread has 13 tweets. I captured the first eleven below, and the final two in the Takeaway section at the end.

It's never too late to learn something and never too early to share knowledge with others. My 11yo is getting more into Python so I decided to do (separately) the same intro Udacity course and be a study buddy.

And something interesting happened. (A thread)

It started weeks ago. We realized schools were not going to have any meaningful routines & wanted to give him something with a target and achievement, that would promote self-study and learning. I pointed him to the Udacity "Intro to Python Programming".

He started doing the lessons & zoomed through them.
It was clear he was watching the videos and completing the exercises fairly fast. It wasn't as clear if he understood the concepts in a way that allowed him to apply them elsewhere.

So I announced I would do the course! 🙋🏽‍♀️

At which point he suddenly took an interest in MY progress. I made it a point to tell him I had never done the course before. (True - I've used Python as-needed and learned it as I learned everything else, by examples and application)

He decided he needed to be my coach. 😍

And so began an interesting journey. I watched videos with him and sketchnoted things of interest. And we would have discussions about what we were hearing and how it would apply. Till then he had used Python with Mindstorms - and with clear code examples (copy/edit). Now he saw Python as an open-ended tool to make things - and he started reading "Invent your own computer games with Python"

It opened his mind further to creative things he could do with code. Which brings me to yesterday (Jul 18). He came over all excited to show me a simple text-based adventure game he had created via Trinket App

A professional coder might look at it and think it needed work
Just conditionals, print statements and string literals. Not at all DRY.

They would be wrong.

It wasn't code.
It was creation + storytelling

He was only running code examples and modifying them slightly. But he had learned two things already.

And now he was ready to have the conversation on problem solving with code given a written problem. 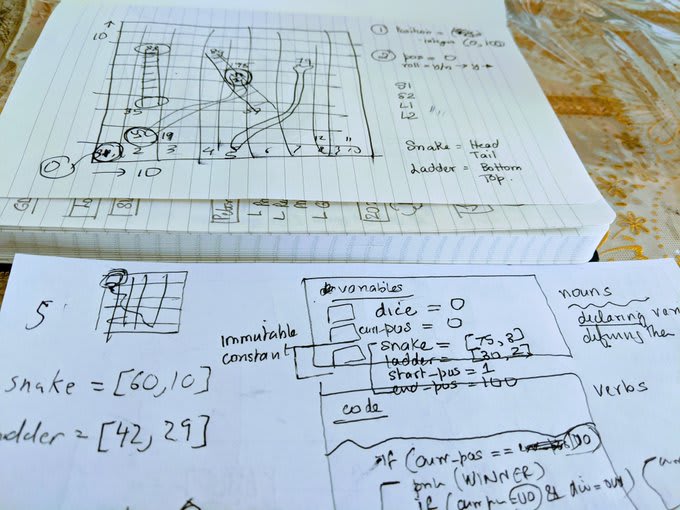 The image above was me challenging him to take the same example text-adventure and modify it to create a "Snakes-and-Ladders" game.

We had more conversations - the biggest lesson I could impart to him was that there were no perfect solutions. Just iterative experiments to get desirable results. We walked through data structures and functions and understanding how to write code for agility and reuse.

His first board had 1 snake, 1 ladder - and it worked.

This morning he has been busy explaining to his grandparents how they can create a text-based board game with Python. And explaining how we can share code via browser if they want to learn. And he told me he will extend this to multiple snakes/ladders - 😱

And that to me is the three steps to successful learning

I'll update this with more resource links as we go. But starting with this. Hugely recommend the book - it's available online here 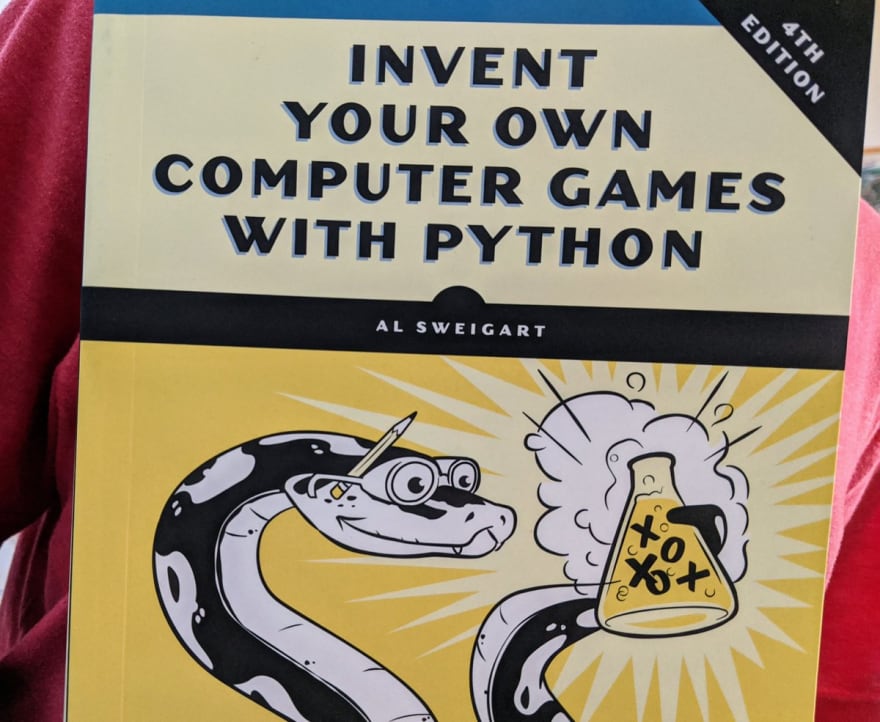 @The_Python_DEV I'm hoping to update the post with this as well - if you're learning Python the 11yo is using @AlSweigart 'Invent your own Computer Games with Python' as his guide.

Huge props and thanks to Al for an incredible resource! ♥️

We have a working Snakes-and-Ladders game and it has the ability to be taken to the next level and randomized for different board sizes. I gave him the win on this one. 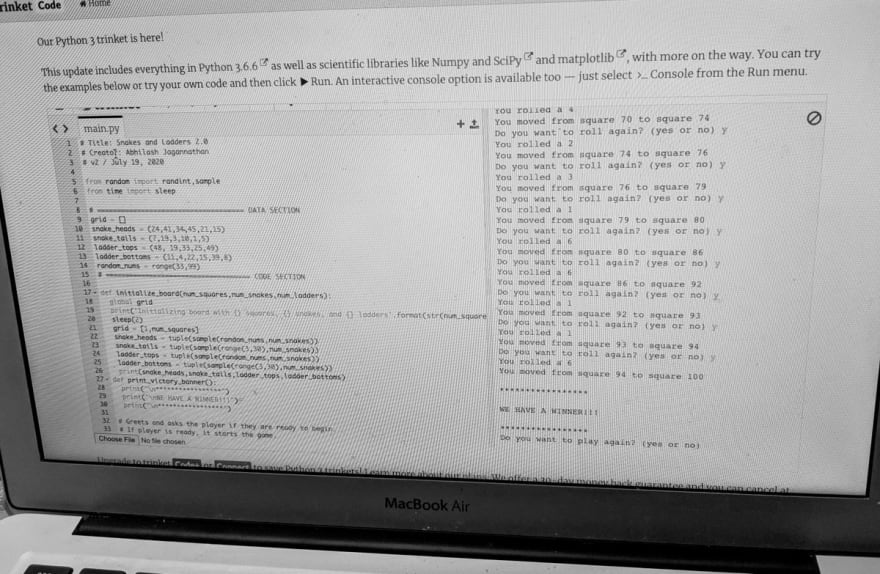 I'm still startled at the level of engagement with this thread. ♥️ A mini milestone: The 11yo did build the Snakes-and-Ladders game and delivered on his promise.

Guidelines to iterate code:
First Correctness = it works
Next Clarity = its readable
Then Compactness = its efficient twitter.com/nitya/status/1…
Nitya | #30Days 🎯 | https://dev.kotlin.fyi 🛣 @nitya
It's never too late to learn something and never too eat to share knowledge with others. My 11yo is getting more into Python so I decided to do (separately) the same intro Udacity course and be a study buddy. And something interesting happened. A thread. (1/N) https://t.co/ln7VuwAf9s

I think I may have found us a new adventure to go towards.

My 11yo was learning Python from a games book, where the first challenge was a simple text adventure. I challenged him to evolve the code to make it a Snakes-and-Ladders game instead - and he did!

The 11yo was on board and we had a great conversation but this one is a bit more complex than the first one. I hope he perseveres. And I hope I get a chance to update this thread with learnings later 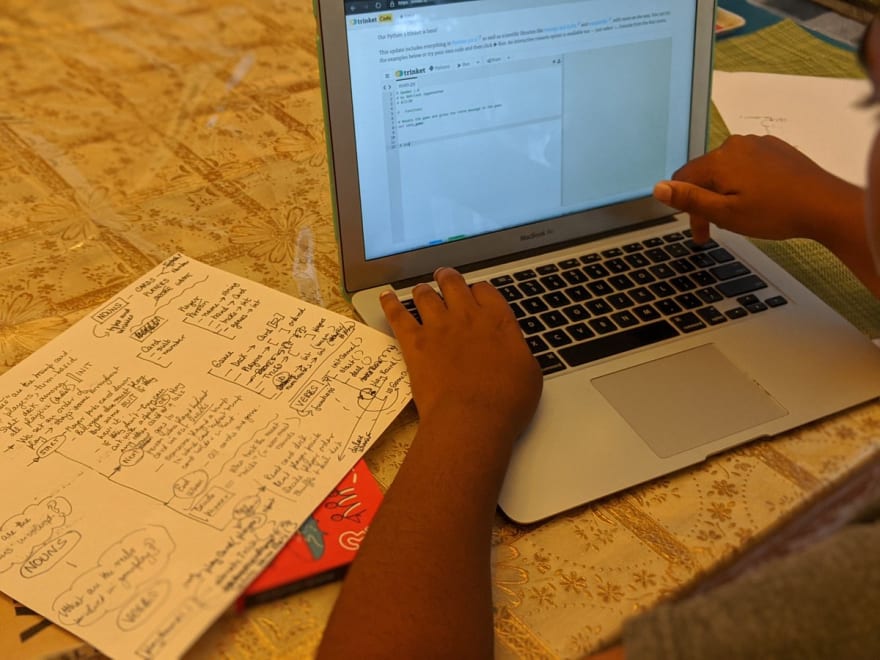 Learning journey continues. 11yo came of his own accord to ask if we could think of another game he could build with his current Python knowledge.

So we talked card (strategy) games. My chicken scratch is terrible. He's now off to translate it into code. This one is tough 🔥♥️ twitter.com/nitya/status/1…
Nitya | #30Days 🎯 | https://dev.kotlin.fyi 🛣 @nitya
It's never too late to learn something and never too eat to share knowledge with others. My 11yo is getting more into Python so I decided to do (separately) the same intro Udacity course and be a study buddy. And something interesting happened. A thread. (1/N) https://t.co/ln7VuwAf9s

Do you have a story on how it's never late to learn? Or about someone who surprised you with their ability to overcome initial hurdles and discover the joy in problem solving?

Let me know - and if you have ideas or insights into other things I can get the 11yo to explore in his Python and game development journey, just leave a comment below. ♥️

How to choose the right API Style and Technology

Once suspended, nitya will not be able to comment or publish posts until their suspension is removed.

Once unsuspended, nitya will be able to comment and publish posts again.

Once unpublished, all posts by nitya will become hidden and only accessible to themselves.

If nitya is not suspended, they can still re-publish their posts from their dashboard.

Thanks for keeping DEV Community 👩‍💻👨‍💻 safe. Here is what you can do to flag nitya:

Unflagging nitya will restore default visibility to their posts.