Asynchronous coroutines with C# and IAsyncEnumerable

This article is based on the talk I had a privilege to give at the recent Sydney Alt.Net User Group meetup.

The repo with the full source code can be found here.

Updated: It was an exciting opportunity and experience to speak on this topic at .NET Conf 2010. My talk is now available on YouTube:

Coroutines are useful for script-like scenarios where the code execution flow can be suspended and resumed after each logical step. Internally, they use some sort of programming language syntax sugar for generating state machine methods.

In the C# world, they have been popularized by Unity game development platform, and Unity uses IEnumerator-style methods and yield return for that.

Prior to C# 8, it wasn't possible to combine await and yield return within the same method, making it difficult to use asynchrony inside coroutines. Now, with the compiler's support for IAsyncEnumerable, it can be done naturally, and we're going to explore this option here.

The execution environment for the code listed here is a Windows Forms .NET Core 3.1 app, but the same techniques can be used anywhere C# code runs.

Pull-based approach to coroutines with IEnumerable/IEnumerator

This approach has been in use for over a decade, since yield was introduced in C# 2.0. Here is how a fade effect can be implemented as an IEnumerator-method in a Unity video game (borrowed from their docs). The use of yield return allows to "spread" the for loop across multiple frame rendering iterations:

Traditionally, we use yield return for synchronous generation of data sequences to be further processed with LINQ operators. In contrast, with coroutines it's about code rather than data, and we use yield return as a tool to break the code into multiple individually executed chunks.

This is convenient, because we can use all the normal control flow statements (if, for, while, foreach, using etc)
where otherwise we would have to use a chain of callbacks. There's a notable limitation though, C# doesn't allow yield inside a try {} block.

Let's create our own example. We want CoroutineA and CoroutineB to execute cooperatively on the primary UI thread. In real life, they might be drawing animation effects or doing background spellchecking, syntax highlighting or other specific ViewModel/UI updates.

Here, to keep it simple, we'll just be using the console for some visual progress output:

The execution flow can be illustrated by this diagram: 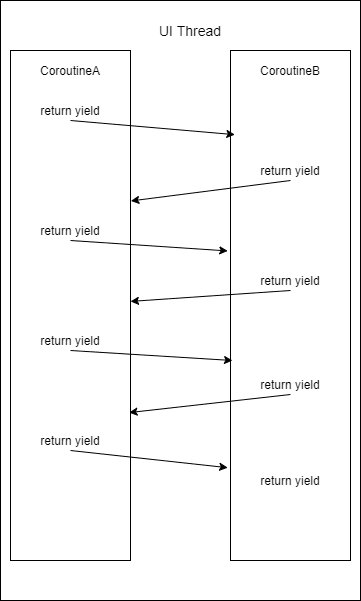 To run these two coroutines cooperatively, we need a dispatcher, the code also known as a coroutine driver. Its purpose is to advance the execution flow of each coroutine to the next step, from one yield return to another. That can be done upon timer intervals, user input events, or even something like IObservable-subscriptions in ReactiveX workflows.

We will be using a Windows Forms timer for this simple example. The dispatcher proactively "pulls" the execution of yield-continuations by calling IEnumerator.MoveNext upon each Tick event. CoroutineCombinator is a helper to combine two IEnumerable streams into one. 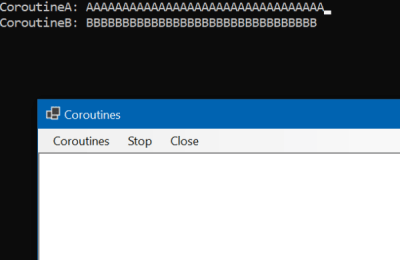 Instead of using IEnumerable/yield return, we could've tried achieving the same with async/await:

However, this would have a somewhat different semantic. We'd only be notified about the completion of the whole method, not the intermediate steps (versus yield return). Thus, we'd lose precise control over how the execution flow gets suspended and resumed at the points of await. It's possible to implement a custom TaskScheduler, SynchronizationContext or a C# awaitable to control it, but that'd come with added code complexity and runtime overhead.

Ideally, we should be using async/await for awaiting the results of an actual asynchronous API, rather than for suspending the execution flow, and using yield return for the latter.

Prior to C# 8, it wasn't possible to combine the two within the same method, but now we can do that.

Push-based approach to coroutines (or async pull) with IAsyncEnumerable/IAsyncIEnumerator

In 2018, C# 8.0 introduced support for asynchronous streams with new language and runtime features like:

If you are not familiar with the concept of asynchronous streams, I'd highly recommend reading "Iterating with Async Enumerables in C# 8", by Stephen Toub.

And so, by analogy with IEnumerable, we can use IAsyncEnumerable-methods to implement coroutines with async calls inside.

Before we get into a real life example of that, let's reproduce what we've done so far with IEnumerable-based CoroutineA and CoroutineB, but using IAsyncEnumerable this time. We still want to run the yield return continuations upon fixed timer intervals, but we also want to make sure there is no pending user input in the UI thread's message queue, before we proceed with any micro-task that runs on the UI thread. That's what inputIdler.Yield() is for below:

Let's also slow down CoroutineB by introducing an async Delay, just because now we can:

Both coroutines now run concurrently (still on the same UI thread). We don't want to put (say) CoroutineA on hold only because CoroutineB is asynchronously waiting for Task.Delay. There's still a way to synchronize if needed, which I'll show later. 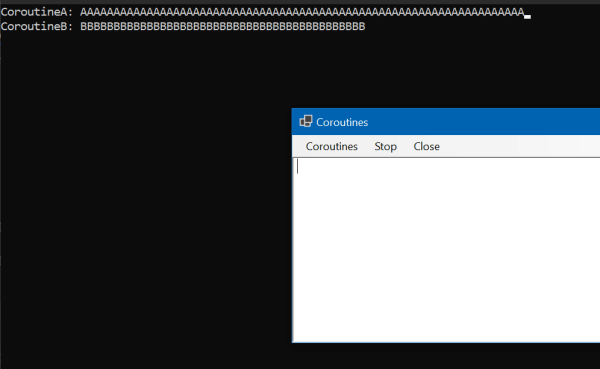 Synchronizing the flow of asynchronous coroutines.

Now, what if CoroutineA needs to synchronize upon the progress of CoroutineB? Below is a made-up but simple example, where CoroutineA starts progressing only when CoroutineB has already been half-way through its own workflow. At that point, CoroutineB awaits for CoroutineA to catch up, then they both continue running to the end.

We do that with a help of custom AsyncCoroutineProxy, a helper class that wraps a .NET Channel to serve as an asynchronous queue for progress notifications from IAsyncEnumerator.MoveNextAsync of CoroutineB.

A Channel is like a pipe, we can push objects into one side of the pipe (with Channel.Writer.WriteAsync), and fetch them as an asynchronous stream from the other side (with Channel.Reader.ReadAllAsync). 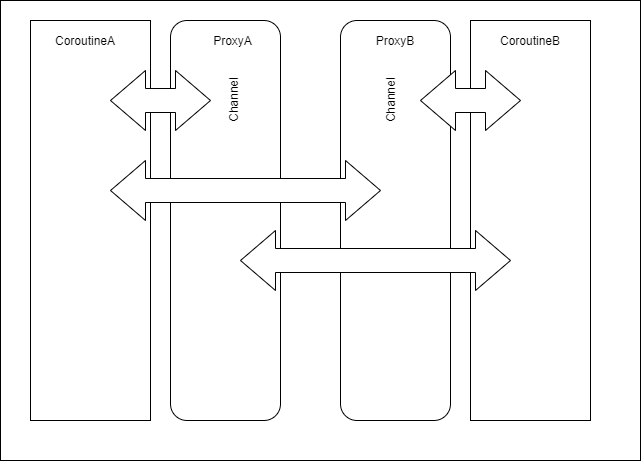 As the dispatcher code of AsyncCoroutineProxy asynchronously iterates through the output of CoroutineB (with await foreach), it relays the received items by writing them to Channel.Writer, and then CoroutineA reads them from Channel.Reader:

To run both coroutines: 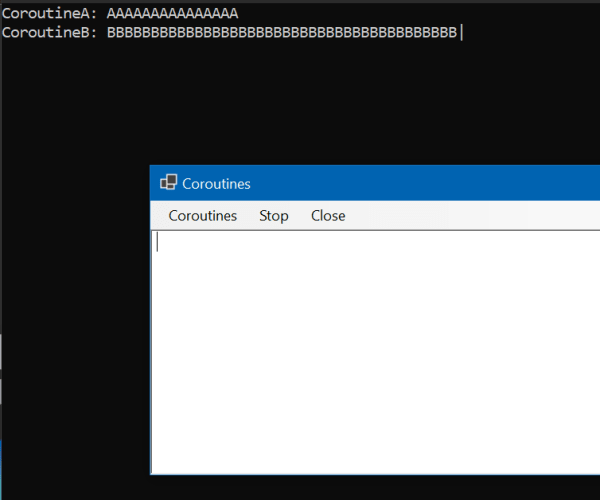 Using CoroutineProxy, CoroutineA and CoroutineB can operate as asynchronous producer/consumer to each other, and they can swap these roles.

That's actually how I use them for automated UI testing. I've recently put together a Windows desktop app #DevComrade, a side project to enable pasting without formatting by default and some other productivity improvements. It uses Win32 simulated input API to asynchronously feed unformatted text into the currently active window, character by character as though it was typed by a person.

I needed an automated test to emulate that. Below is what I've come up with (the full source here).

There's a foreground thread with a form containing a TextBox control, and there's a background thread that iteratively calls SendInput. A decade ago I'd probably be using something like ManualResetEvent and blocking WaitOne() to synchronize these two threads at the key points of the test workflow. Today, I can use asynchronous coroutines for that.

For the foreground thread:

For the background thread:

The dispatcher code, which runs the test itself:

So it looks a bit like mutual asynchronous recursion, besides it isn't. The actual backpressure is created by CoroutineProxy.RunAsync, which drives the execution of each coroutine by await foreach loop.

Note how BackgroundCoroutine and ForegroundCoroutine use yield return and await GetNextAsync() to synchronize upon each other's state as they are progressing. Everything is asynchronous, there is no blocking calls. Both coroutines are executed on two different threads and actually run in parallel. In our previous examples, we only dealt with concurrent execution on the same thread.

In my opinion, asynchronous coroutines can be an elegant solution to some niche consumer/producer scenarios, especially when there is no clear role separation between producer and consumer. The same kind of problems can certainly be solved with mature and powerful frameworks like Reactive Extensions or Dataflow. However, the learning curve to use IAsyncEnumerable and Channels should be really low.

A feedback would be greatly appreciated. Please feel free to leave a comment here or drop me a DM on Twitter.

One other useful thing I've learnt while working on this article was how to use the new IValueTaskSource interface to implement a source of lightweight ValueTask objects. This can help to greatly reduce allocations while awaiting a ValueTask on hot asynchronous loops. For some examples, check the source code of SimpleValueTaskSource,
InputIdler and TimerSource.

C#: How to mock HttpContext methods such as ForbidAsync?

Once suspended, noseratio will not be able to comment or publish posts until their suspension is removed.

Once unsuspended, noseratio will be able to comment and publish posts again.

Once unpublished, all posts by noseratio will become hidden and only accessible to themselves.

If noseratio is not suspended, they can still re-publish their posts from their dashboard.

Once unpublished, this post will become invisible to the public and only accessible to Andrew Nosenko.

Thanks for keeping DEV Community safe. Here is what you can do to flag noseratio:

Unflagging noseratio will restore default visibility to their posts.