I always wanted to play around with a binary analysis framework but most of the time I was turned off by how difficult it was to install and use it. Just recently I've thought to give angr a try and now I want to share my experience with you! I will present you a two scripts that solve two challenges, if you wish to dig deeper and learn Angr then you should visit it's official documentation.

angr is a python framework for analyzing binaries. It combines both static and dynamic symbolic ("concolic") analysis, making it applicable to a variety of tasks.

For me the easiest way to install Angr and get it working on the first try was to download Kali linux, install it in VirtualBox (make sure you have at least 12 GB space for the disk) and execute: pip install angr.
From here you can setup your Python dev environment in Kali as you please.

For the first challenge we have the following source code:

The goal is to find two arguments to give to the program in order to overflow buf into count and display WIN. We can attempt to solve this with trial and error, debugging, do some computation or we can make Angr solve it for us with the following Python script.

Running the script will give us the solution for this binary, if the binary would change slightly (the count) we can still run the script and get a solution.

The next challenge is easier, the binary is called multiple-styles and it can be downloaded from here: https://github.com/trailofbits/manticore/tree/master/examples/linux/binaries

By looking at it's disassembly output: 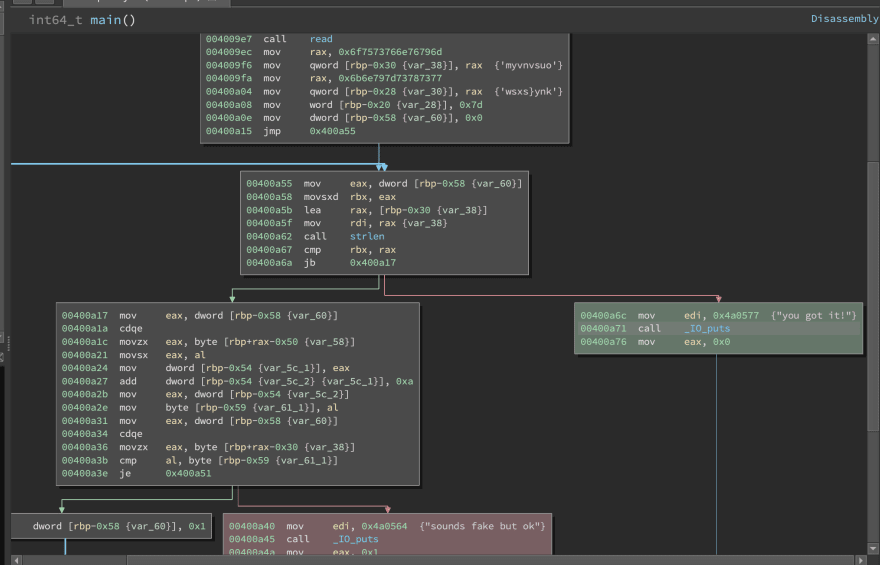 We can see that the program does the following things:

At this point we can google for online caesar cipher, paste the string that got loaded and decipher it with an offset of -10, but we're going to let angr decipher the password for us.

Thank you for reading! :D

How to Manage Your Secrets with git-crypt