Welcome to another article on network forensics. We are still talking about the SMB protocol family, but this time let's focus on messages that carry hints about the connected endpoints. These hints can be used to infer knowledge about the client and server (e.g. OS version). This process is called fingerprinting.

SMB1 NegotiateProtocolRequest (smb.cmd == 0x72) carries information about the dialects that the client understands. Similarly SMB2 NEGOTIATE request (smb2.cmd == 0) contains a list of client's dialects and SMB 3.x capabilities. These bits are specific to client implementation (or configuration) and thus can be used as part of the client's fingerprint. 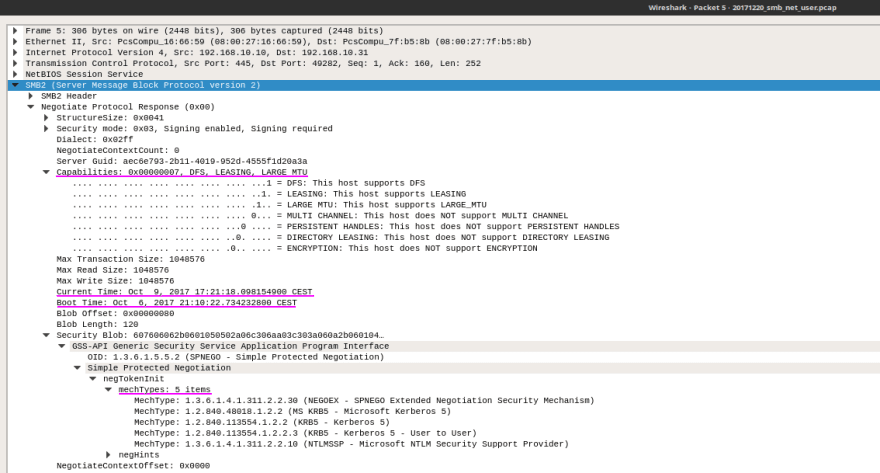 NTLM authentication has been long superseded by a more secure Kerberos, but in my experience it can still be found wildly in public institutions and smaller companies and sometimes even in corporate networks. From a forensic POV we are mainly interested in usernames, hostnames and NTLM hashes:

In case of Kerberos there are still useful metadata like realm aka. domain name (kerberos.crealm), principals aka. user/server names (kerberos.cname/kerberos.pname/kerberos.sname), auth period (kerberos.from/kerberos.til) and more.

OK this is probably a really niché case, but hey, that's what forensics is all about. When using a shared network printer, MS Spool Subsystem (spoolss) is typically used over SMB/RPC stack. Once that printer is available, the OS can request various printer data using GetPrinterData function. Inspecting these data can reveal interesting bits, e.g. OS Version of the print server.

If you're interested in reading more about OS/application/device fingerprinting, there's sadly not many links I could point you to. Tools like p0f or nmap can provide a good start. You can also read this post by SecurityTrails which summarizes different means of fingerprinting including SSH or TLS protocols.

Once suspended, nx1 will not be able to comment or publish posts until their suspension is removed.

Once unsuspended, nx1 will be able to comment and publish posts again.

Once unpublished, all posts by nx1 will become hidden and only accessible to themselves.

If nx1 is not suspended, they can still re-publish their posts from their dashboard.

Once unpublished, this post will become invisible to the public and only accessible to Petr Stuchlík.

Thanks for keeping DEV Community 👩‍💻👨‍💻 safe. Here is what you can do to flag nx1:

Unflagging nx1 will restore default visibility to their posts.