After spending some years in network forensics field, hoarding tons of PCAPs and making cryptic notes on the topic I decided that I wanted to review it all and start sharing some concepts, interesting findings or cool ideas. I hope that someone might find them useful or just fun to follow. For the sake of sanity I am going to publish this as series.

This article will be dealing with SMB protocol and metadata hiding in it, often in plain sight. My knowledge on SMB is certainly limited and I still remember the time when "Samba" was just an easy way to share stuff on MS Windows network. In my experience this is also what many people think today, sometimes even in forensic world. The usual evidence is that files were transferred from A to B and metadata are often ignored because of the juicy payloads.

But SMB is pretty damn complex ecosystem and has much more to offer. So in this article I am going to ignore the typical file transfers.

In this part I will describe some sources of metadata which either accompany common SMB file transfers or get transferred as files due to OS or app-specific behavior.

For brevity of this text I am going to expect that the reader is familiar with Wireshark and basics of SMB protocol. While a lot of information about SMB protocol can be found on Wireshark wiki, I highly recommend SMB Quick Introduction by Hats Off Security as the author can really look on things from forensic POV.

The important thing for our purpose is that SMB protocol has three major versions (SMB 1-3), but version 3 is technically just SMB 2.2 so the first Wireshark filter you should be aware of is smb or smb2 which gives you all SMB packets regardless of the version.

File MACB (modification, access, change, birth) timestamps are one the basic forensic artifacts as they help to point a forensic timeline for a given case. Luckily Samba supports these timestamps in many common packets like SMB2/Create Response (downloads typically), SMB2/GetInfo Response, SMB2/SetInfo Request and SMB2/Close Response. 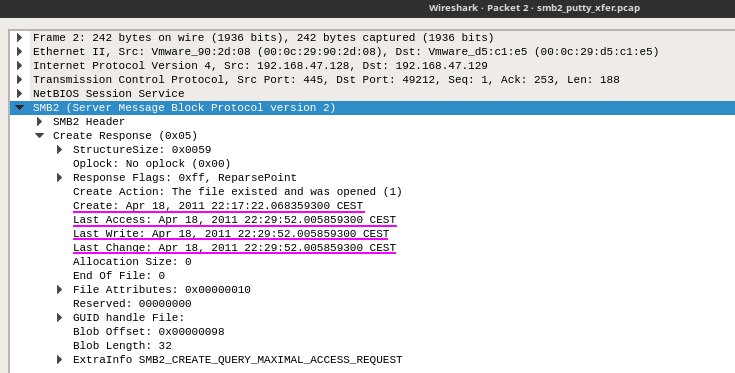 Speaking of file metadata there can also be complimentary metadata files. These files are not always available, because their presence in the traffic is conditioned by a specific OS or application feature.

On MS systems one of the most common metadata files is Windows thumbnail cache, aka Thumbs.db. The file is notoriously known and stores thumbnail images for explorer.exe to load faster. What's not so widely known outside infosec community is that when browsing Samba shares using MS Explorer, this file gets created and transferred automatically over network (the thumbnail cache makes even more sense in this case).

Another interesting metadata file is Outlook.NK2. This is a MS Office AutoComplete list of names and email addresses. Outlook automatically updates this file according to user activity. If you happen to gaze into network where MS Office applications run over network, there's a chance that you can encounter a transfer of this file in the traffic.

This means that all user profile data are transferred over network including MS Registry Hives such as ntuser.dat. This file contains anything that typically resides in HKEY_CURRENT_USER, e.g. mount points, recent documents, typed URLs, connected wireless APs or remotely connected systems.

On MacOS a .DS_STORE file is a hidden attribute store which can be automatically created by MacOS Finder in any folder (regardless of file system or network share) based on user activity.

Especially the first case is interesting if you find a .DS_STORE on a website. I recommend a SANS talk by Nicole Ibrahim and a dissection guide by gehaxelt for more information on the topic.

That's it for today. Do you know of any other forensic metadata sources in SMB protocol? Let me know.