Javascript’s functional programming just like any other functional programming language like Common Lisp, Clojure, Elixir, OCaml, and Haskell is the idea that programs can construct programs by composing functions and applying them. Declaratively, we can write function definitions as trees of expressions that map values to other values, rather than a sequence of imperative statements which update the running state of the program.

JS treats functions as first-class citizens, meaning that they can be bound to names (including local identifiers), passed as arguments, and returned from other functions, just as any other data type can. This allows programs to be written in a declarative and composable style, where small functions are combined in a modular manner. One of the main concepts of functional programming which is the topic in discussion of this post is Callbacks & higher order functions.

To begin, we are going to examine a simple, regular and profoundly useless function that squares the number 3.

This is stupid and defies the fundamentals of functions and why we use them. There is no variability or reuse that we can get out of it. We can't use it to square another number or get a different value out of it. Not good!

So what we can do to make the function more reusable is generalize it taking the hard-coded number out and leaving that up to whoever calls the function to assign the number as input to the function they want to square.

Let's stretch the study of callbacks and higher-order functions idea by examining these functions:

The functions above are very similar, the only difference is how the loop works either multiplying, dividing or adding to each element in the array. This code isn’t DRY, we are repeating ourselves.

What we can do to get better functionality and re-usability out of the previous code is by generalizing the function like we did before. We can have a generic MAMA function called copyArrayAndManipulate that takes not only array as an input but also a BABY function we are going to call (instructions). This way, we can break out all the little parts that are different in the functions above and have ONE mama function for all the redundant code. DRY!

Before we go any further with this article, there are a couple of points to agree on regarding JavaScript:

Now that we got that out of the way, let’s walk through the code above line-by-line to better understand what happens when we call the mama copyArrayAndManipulate with one of the baby functions, say multiplyBy2:

First, we declare a function definition into the global execution context (global memory) called copyArrayAndManipulate. Note that we don’t run the code inside the function yet until it’s called. 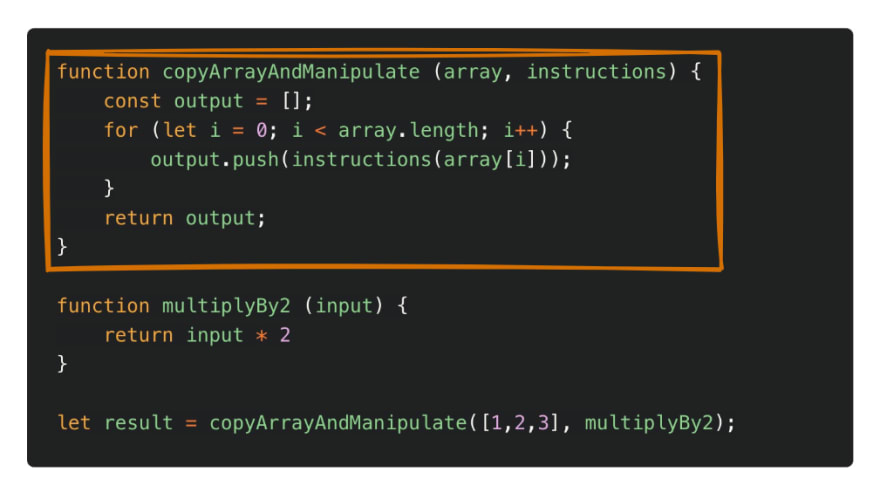 Then, we declare a function definition into the global execution context (global memory) called multiplyBy2. Note that we don’t run the code inside the function yet until it’s called. 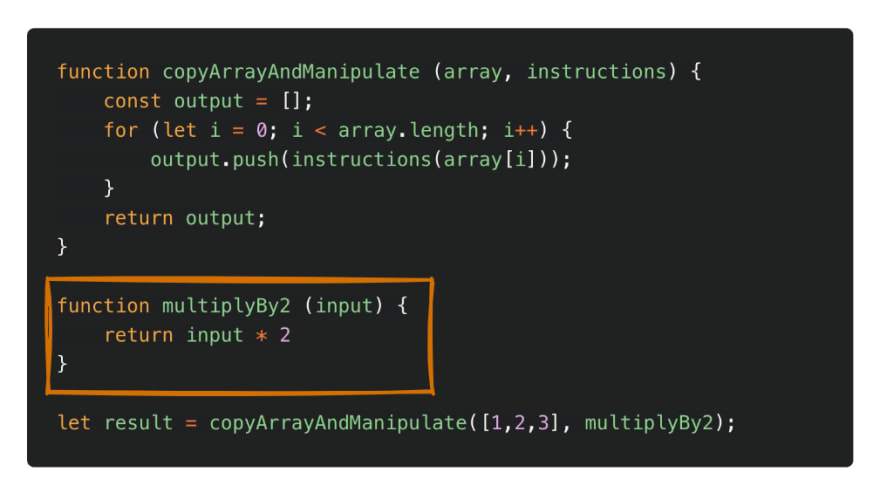 In the last line, we declare a variable definition into the global execution context called result which is undefined for now until the function copyArrayAndManipulate is run and returns a value to be assigned to result

Since we called the copyArrayAndManipulate when defining the result variable, we need to run it and the returned value to be stores in the result variable and so we start by running the code inside of it and go into its local function memory

Let’s try to simulate what happens in the local memory of the copyArrayAndManipulate function: 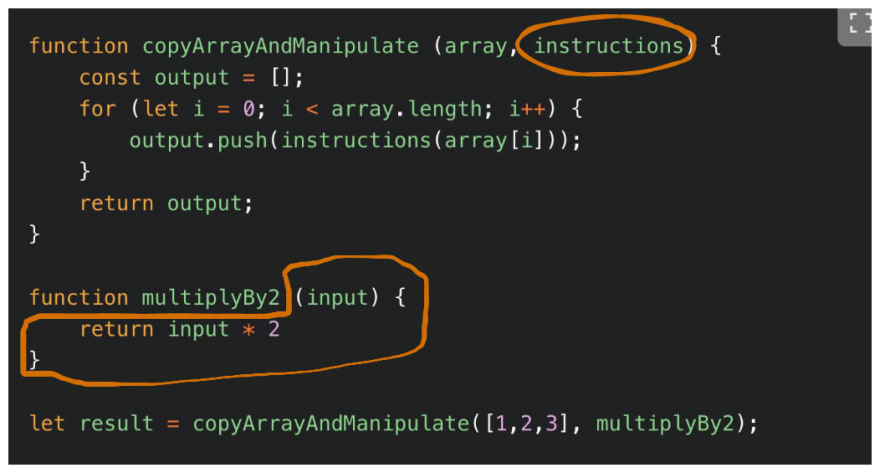 We we call the instructions function which is now equal to the multipleBy2 definition (not the label) meaning it has its same code, we enter its own execution context:

First iteration: calls the instruction function with the input: 1, the function is now on top of the call stack:

Second iteration: calls the instruction function with the input: 2, the function is now again on top of the call stack:

Third iteration: calls the instruction function with the input: 3, the function is now again on top of the call stack:

Finally, the value [2,4,6] is saved into the global variable value result 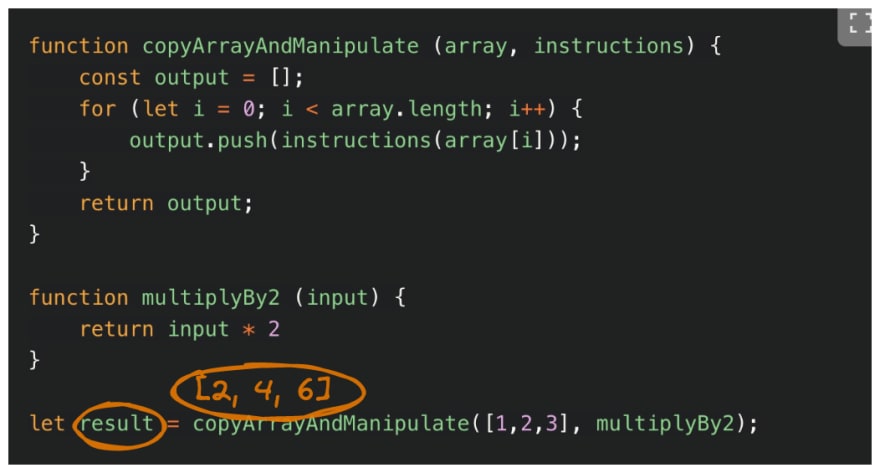 How was this possible?

Functions in javascript are first-class objects. They can co-exist and can be treated like any other JS object:

Functions have one property that JS objects do not have, they can be invoked/called/run.

In the example above: copyArrayAndManipulate is our higher order function. takes in a function and passes out a function call multiplyBy2 which is our callback function

callbacks & higher order functions keep our code simple and DRY. lots of the underlying javascript powerful that allows us to run complex things like asynchronous code rely on this concept.

Omar Albacha 🔅
Front end developer with an understanding of backends and how they work. I am interested in UI and design and love working with front end libraries like react js and react native.
Short-circuiting of logical operators and their return values
#javascript #webdev #beginners

Once suspended, oalbacha will not be able to comment or publish posts until their suspension is removed.

Once unsuspended, oalbacha will be able to comment and publish posts again.

Once unpublished, all posts by oalbacha will become hidden and only accessible to themselves.

If oalbacha is not suspended, they can still re-publish their posts from their dashboard.

Once unpublished, this post will become invisible to the public and only accessible to Omar Albacha 🔅.

Thanks for keeping DEV Community 👩‍💻👨‍💻 safe. Here is what you can do to flag oalbacha:

Unflagging oalbacha will restore default visibility to their posts.