JAMstack is an architecture that combines JavaScript, APIs, and Markup.

That is not limited to a specific technology, but it has the following architecture (The right one is JAMstack, the left one is a traditional 3-tier architecture, from jamstack.org) 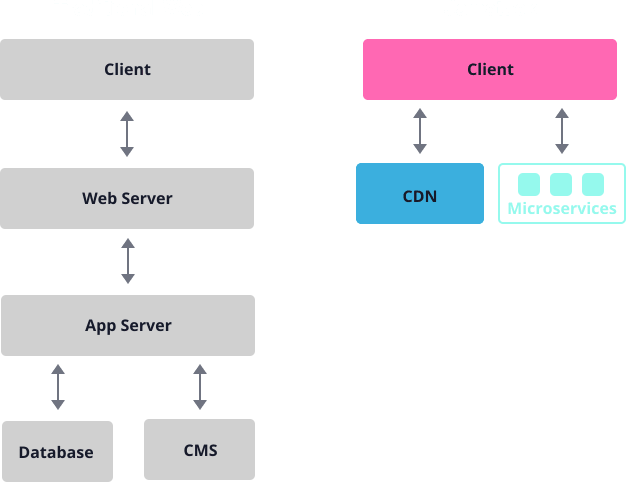 JAMstack's JAM is used in the following contexts;

The overall system will be a layered architecture that looks something like this;

For the key concept, take a look at jamstack.org. If you want more details, I recommend the book Modern Web Development on the Jamstack.

Here, I will introduce the specific architecture and some of the important technologies in JAMstack.

Single Page Application (SPA) is an application that uses JavaScript to dynamically retrieve and update data and perform screen transitions. It eliminates the need to make a round trip to the server side for each screen transition. It is also important in the sense that it is an architecture where the Frontend is starting to be clearly separated from the Backend.

Some SPAs don't do prebuild, so I guess you could argue that they are not strictly speaking JAMstack. However, in Modern Web Development on the Jamstack, it's mentioned as an example of JAMstack, and aloso it's stated that "JAMstack is a movement, a community collection of best practices and workflows that result in high-speed websites that are a pleasure to work on".

In addition, the SSG, which will be discussed later, can be combined with SPA to demonstrate its value, and SPA can be said to be an indispensable part of JAMstack.

The difference between SSG and conventional static sites is that SSG provides flexible markup generation at build time. For example, in SSG, dynamic data can be generated at build time. This eliminates the round trips that occur with monolithic apps and allows you to simply deliver static content via CDN or other means. 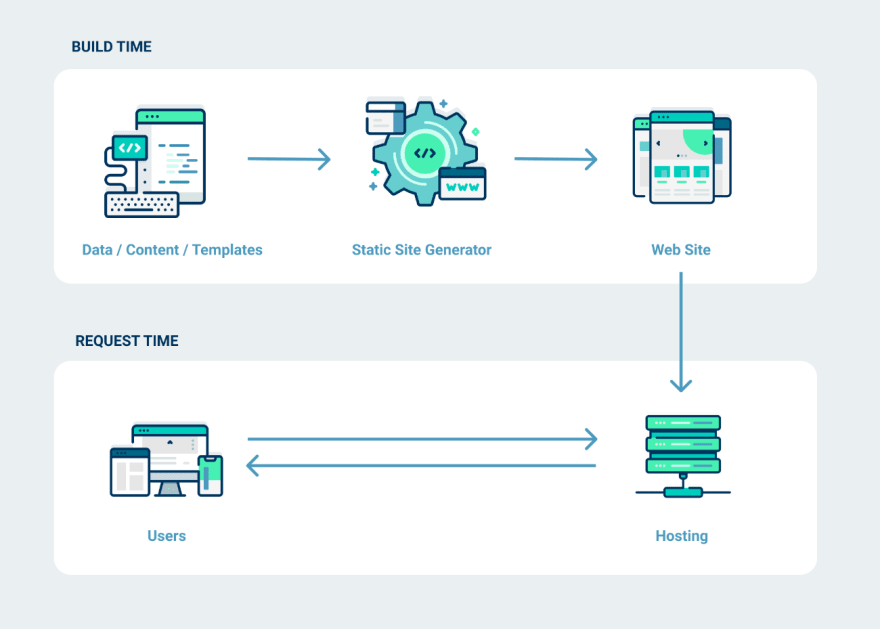 This is also an abstraction of the Backend. It guarantees technical independence between the Frontend and the Backend, and allows Web to be more like a native app.

In a nutshell, it's a technology that returns cached static content on request, while regenerating the corresponding content behind the scenes. For more details, please see the following.

Use cases include when there is a large amount of static content in an e-commerce site, or when you want to always show the latest content even though it is static.

Incremental Static Regeneration can be a feature that extends the use cases of SSG. It embodies JAMstack's best practices for completing static content at the edge, and provides an option for developers to first ask, "Can we do SSG?".

Progressive Web Apps (PWAs) are web apps that use new web APIs and features in addition to the traditional web to bring a native app-like experience to web apps.

I think the reason why the description of PWAs is so abstract is because it doesn't refer to any specific technology. There are three elements that make PWA; Capable, Reliable, and Installable, web.dev has more details.

We believe that PWAs are also a part of the JAMstack movement, such as turning the web into apps with the App Shell model, communication with APIs, Offline Capability and Installability.

A simple SPA has the following disadvantages, which are solved by SSG.

JAMstack is a relatively new architecture, but I feel that it is gaining in popularity as a web best practice these days.

The Frontend is no longer limited as it was in Monolith, and we can now take full advantage of Frontend technologies. With the loosely coupled technology, deployment can be done separately, and it will be easier for applications to run improvement cycles.

At the same time, however, it also means that the complexity has shifted to the Frontend, which requires more specialized skills.