Developing Without a Build: es-dev-server

This article is part of a series on developing without a build:

In the introduction article, we looked into different workflows and browser APIs. In this article, we will look into how we can set up es-dev-server, and how it can help us developing without a build.

es-dev-server is a composable web server that focuses on developer productivity when developing without a build step. Through options, you can opt into extra features such as caching, reloading on file changes, SPA routing, resolving bare module imports and compatibility modes to support older browsers.

To start off let's create an empty npm project and install es-dev-server:

Create an index.html in the root of your project:

And create a dummy src/app.js file:

We can now run our application with es-dev-server:

Without any extra flags, es-dev-server acts like a regular static file server. Any extra functionality needs to be enabled explicitly.

One of the first things you will run into when developing without any build tools is how to deal with bare module imports like this:

Out of the box, the browser will throw an error, as it doesn't know how to handle these kinds of imports. In our previous article we explored how to use these imports by using import maps, an upcoming browser API.

Until import maps are properly supported in browsers, we can use the --node-resolve flag of the dev server. This will rewrite imports in your modules using NodeJS module resolution before serving them to the browser.

To see how this works let's add lit-html, a HTML templating library, to our project:

Change src/app.js to import it:

If you inspect the network tab, you will see the modules are served correctly as expected. src/app.js is rewritten to:

A great productivity booster is reloading the browser while you are editing files.

To enable this option, restart the server with the watch flag:

Now change anything inside one of the served files, for example the rendered html in app.js. You will see the browser reload automatically with the updated code.

Reloads are done using the EventSource API, which is not supported on Edge and IE11. The dev server injects a small script, which connects to a message channel endpoint: 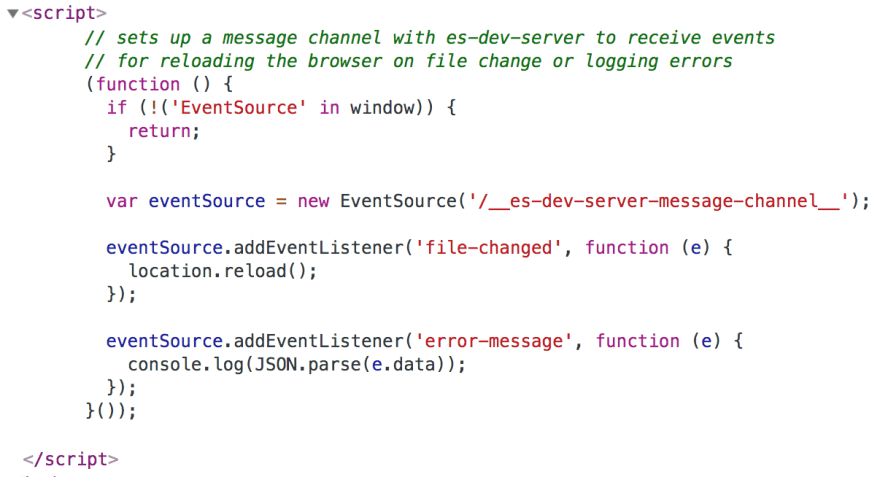 es-dev-server uses the file system's last modified timestamp to return a 304 if the file hasn't changed. This significantly speeds up reloads. You can test this in your browser by turning off Disable cache and refreshing:

Not every project has a single index.html in the root of the project. Because es-dev-server works just like a regular web server, it can serve files from any folder.

For example, let's create a new folder called demo, and move our index.html inside it.

We will need to adjust the script src path to reflect this change:

And we need to tell the server to open inside the demo folder:

The application should be displayed without any changes.

We might be tempted to change the root directory of the web server in order to get rid of the /demo/ part in the URL:

However, this won't work because the web server can only serve files that are within its root directory. By default, this is the current working directory. In our case, the web server needs to be able to serve the contents of the src folder, as well as the node_modules folder.

This is a common problem when working in a monorepo when you want to serve files from a package subdirectory. Many of the modules you need to serve are in the root of the project, so you need to move the root directory up two levels:

If you are building a Single Page Application you are likely doing some form of front-end routing. In order to enable deeplinking or refreshing, the web server should return your index.html on deeper paths. This is sometimes called history API fallback.

Setting up a router is beyond the scope of this article, but the option is easy to enable using the --app-index flag:

When using the --app-index flag, the server will automatically open the server on your app's index if you don't pass an explicit path to --open.

It would be a shame if we have to run a production build every time we want to run our app on one of these browsers. es-dev-server supports multiple compatibility modes that help with this.

When compatibility mode is enabled, the server handles the necessary polyfills and code transformations for older browsers. This takes us into build tooling territory, so we're no longer purely "developing without build tools". I think that's fine, as we're using it only for browser compatibility. You have to opt-in to this behavior explicitly.

Let's see how it works in action. Add a dynamic import to app.js to lazy load a module when a button is clicked:

The dynamic import does not really do anything functional. If we run this on Chrome, Safari, and Firefox it works just fine. Because Edge does not yet support dynamic imports we can't run this code there.

We can turn on the lightest compatibility mode, esm, to handle this case:

With esm enabled, es-dev-server injects es-module-shims and adds a loader script to your index. You don't need to change any of your code for this. You can view the injected script in the index file:

There is some extra boilerplate, as the other compatibility modes might add more polyfills. The polyfills are hashed so that they can be cached aggressively in the browser.

Besides esm there are the modern and all compatibility modes. These modes inject polyfills for common browser APIs and use @babel/preset-env for transforming the latest javascript syntax to a compatible format.

In modern compatibility mode your code is made compatible with the latest two versions of Chrome, Safari, Firefox, and Edge.

In all compatibility mode support is extended to older browsers, all the way to IE11. On browsers which don't support es modules, they are transformed to systemjs modules.

The transformations slow down the server a bit, so I don't recommend using modern or all mode during regular development. You can create separate scripts in your package.json, and run in compatibility mode only when you view your app on older browsers.

esm mode has a negligible effect on performance, so that should be fine to use.

In the previous article, we briefly discussed import maps as an upcoming browser feature which handles bare module imports. es-module-shims and systemjs both support import maps. If compatibility mode is enabled, the dev server takes care of adapting your import maps to work with these libraries, making this a viable workflow during development.

The import maps API is not fully stabilized yet, so if you're going down this path it's good to keep an eye how this standard evolves. Check out this article for a workflow using import maps.

Check out the official documentation for more options, such as integrating the dev server as a library with other tools and installing custom middlewares.

To get started with a project that sets up the dev server for you, use the open-wc project scaffolding:

It sets up the project with lit-element, a web component library. You can swap this for any library of your choosing, the setup is not specific to web components.

Once suspended, open-wc will not be able to comment or publish posts until their suspension is removed.

Once unsuspended, open-wc will be able to comment and publish posts again.

Once unpublished, all posts by open-wc will become hidden and only accessible to themselves.

If open-wc is not suspended, they can still re-publish their posts from their dashboard.

Once unpublished, this post will become invisible to the public and only accessible to Lars den Bakker.

Thanks for keeping DEV Community 👩‍💻👨‍💻 safe. Here is what you can do to flag open-wc:

Unflagging open-wc will restore default visibility to their posts.