Aside from rendering regular apps, they announced that it can be used to build a static blog with markdown. This is what got me curious, so I decided to dive in and explore how this works.

So, If you're an Angular developer who wants to make the most secure and fastest possible version of their markdown blog, hop on the ride and enjoy this quick tour.

Scully is a JAM stack solution for Angular developers. It's a static site generator that takes your new or existing Angular app and pre-renders it to HTML and CSS.

If you take for example the smallest possible Angular website, it'll be around 300K. Now, if you take this app and pre-render it with Scully, you'll be able to cut the size down to 2.5K.

This is a huge deal for someone using a low-end device on a flaky mobile connection.

Why should I use it?

There are a number of benefits when using Scully, especially for Angular devs. Here are some of them:

It takes your Angular app and renders it in a series of HTML pages. Then, once the user downloads the initial page it'll then download the rest of the Angular app and bootstrap it on top, so you still get all the benefits of a Single Page App.

The cool thing about it that with the machine learning algorithm it can find all the routes in your app and render the entire app to a series of static HTML files, which then can be simply uploaded to the CDN of your choice.

First, if you haven't already done this, you need to install Angular CLI 9.x.x.

Next, select Yes for Angular routing and pick SCSS from the list of available styling options.

After it's finished generating a new project we can cd into it.

Ok, let's try running the app to make sure that it works.

You'll see a default Angular app opened in the browser on http://localhost:4200/. 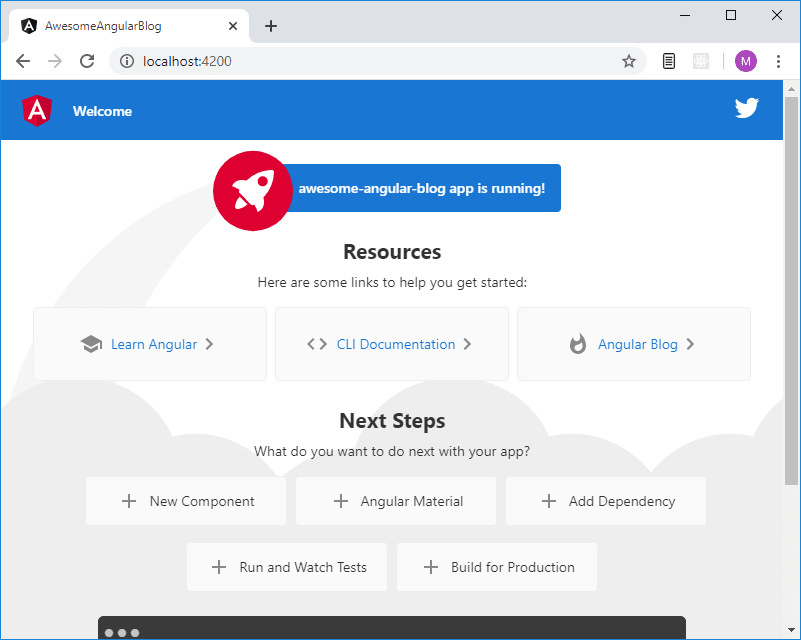 So far so good, now let's get rid of the boilerplate and add something very simple for starters.

Open src\app\app.component.html file and replace its contents with the following:

The development server is watching our files, so now our page should look like this.

A Quick Note: Keep in mind that this is an early alpha release, so there may be some 🐛. At the moment it only supports v9 of Angular (v8 support will be added later).

Here comes the interesting part. Now we're ready to install Scully. The first thing that we need to do is to run this command:

This will install all necessary dependencies, import HttpClientModule, add scully.config.js file which will be used for plugins management and add some code to existing files.

Scully allows us to generate a blog using Angular generate schematic. But we have to keep in mind that we need to build a project before running Scully because it uses the results of our build - dist folder to see what routes we have. So, let's build it now.

After that, you should see a dist folder created. Now let's generate the blog:

After you ran that command, Scully created a blog module with routes for us so we don't have to configure that manually. Also, to get you started it created a blog folder with the default markdown file. Every time Scully builds, it'll render this markdown file to HTML.

We can now add new blog posts with the following command:

Because Angular still can't read markdown, to see the contents of our post we need to build the project and run Scully again. Then they will be rendered and we'll see our static content.

If we look at our dist folder, we'll see a static directory there which was created by Scully.

We can now serve this folder with any server like Nginx or Apache and see the contents of our post. The easiest option for us to check it out is to use NodeJS http-server.

Change into the static directory and run the following command in your terminal: 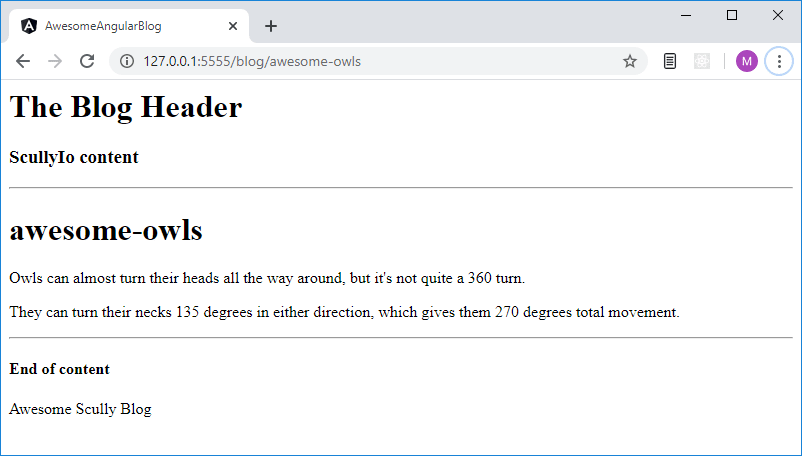 Setting up a home page

Alright, let's add a list of available routes to our home page. For this, Scully has a special ScullyRoutesService.

Open the main src\app\app.component.ts file and import it at the top, then assign the ScullyRoutesService to scully.

Next, in the view file src\app\app.component.html add an ngFor loop that goes through all the routes and displays them on the page using routerLink.

Here we go. We have the basic functionality of the blog working.

From here you can add a bit of styling to make it more visually appealing, add more pages like About, Contact, create a list of categories, all the usual blog things.

The cool thing is that no matter what your blog will look like, it still can be rendered to static assets and served via any available CDN.

Keep in mind that this is an early alpha release, so there will be bugs, but with the team like HeroDevs I'm sure the product is in good hands.

If you got interested and want to know more, the docs have a lot of useful information like how to use the plugin system, how to get this to work with the existing Angular project, and so on.

Also, here are some useful resources on the topic:

Thanks for joining me, have a wonderful day!

Owlypixel
Owl enthusiast, like to blend web development and design into creative art.
100 Days of Gatsby - Display a List of Orders From a CSV File
#javascript #gatsby #graphql #react

Once suspended, owlypixel will not be able to comment or publish posts until their suspension is removed.

Once unsuspended, owlypixel will be able to comment and publish posts again.

Once unpublished, all posts by owlypixel will become hidden and only accessible to themselves.

If owlypixel is not suspended, they can still re-publish their posts from their dashboard.

Once unpublished, this post will become invisible to the public and only accessible to Owlypixel.

Thanks for keeping DEV Community safe. Here is what you can do to flag owlypixel:

Unflagging owlypixel will restore default visibility to their posts.