"Framework is heart of every technology."

Whether you are a beginner, a senior developer, a freelancer, or a project lead, it is a wise decision to be aware of the advantages and drawbacks of each framework in detail. This article can help you gain a better understanding of each framework along with trends and insights. 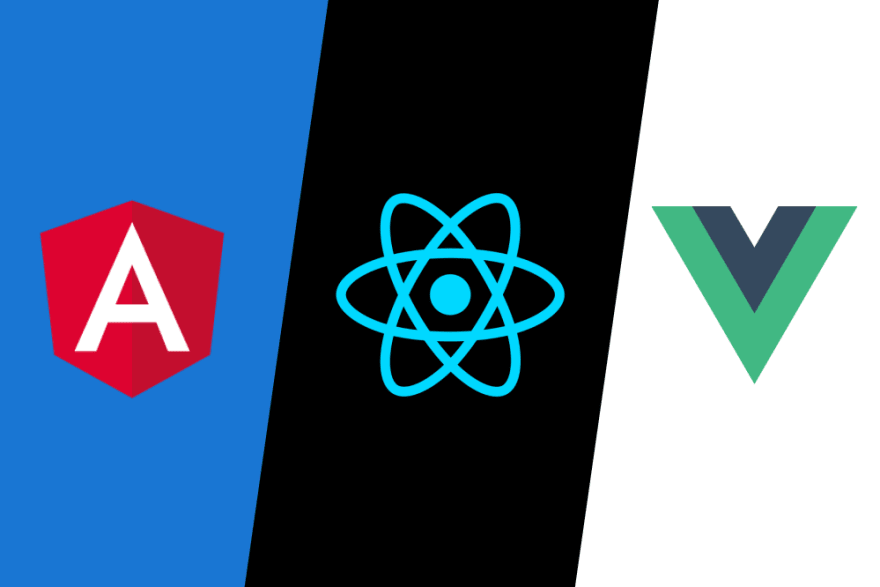 Angular is a Typescript-based open-source web application framework led by the Angular Team at Google and by a community of individuals and corporations. Angular is a complete rewrite from the same team that built AngularJS.

React is an open-source JavaScript library for building user interfaces or UI components. It is maintained by Facebook and a community of individual developers and companies. React can be used as a base in the development of single-page or mobile applications.

Vue.js is an open-source model–view–viewmodel JavaScript framework for building user interfaces and single-page applications. It was created by Evan You, and is maintained by him and the rest of the active core team members coming from various companies such as Netlify and Netguru.

Developed By: Evan You & Team

NPM trends survey: NPM Trend take survey for most downloaded package and found react way ahead from angular and vue 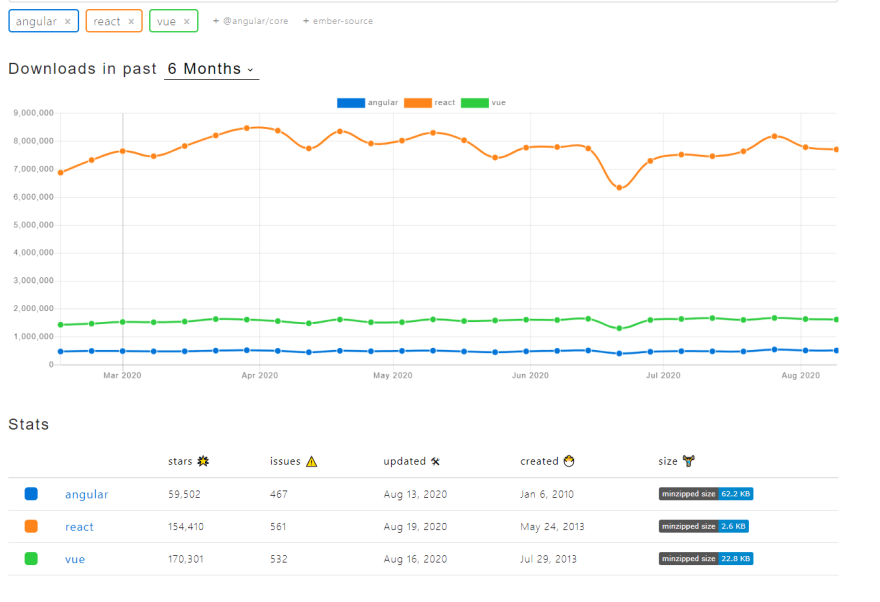 NPM trends Survey: It's about what technology you worked in past, willing to work and willing to learn. 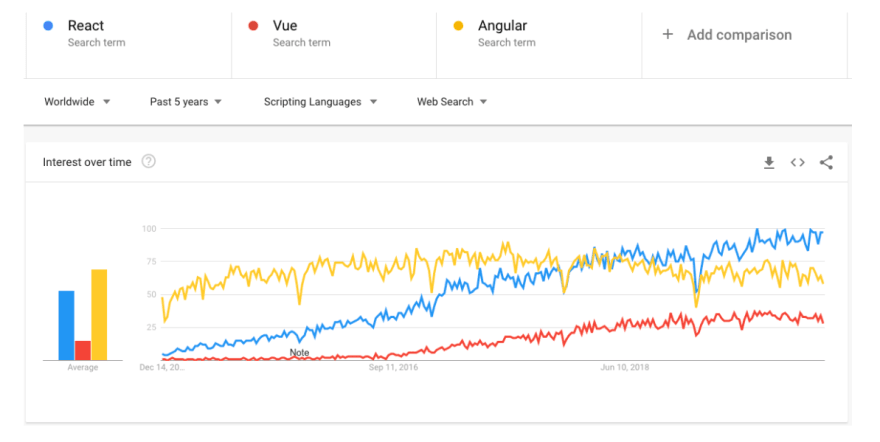 3. Performace : Angular vs React vs Vue

Overview
Performance is one of the most important aspects to be considered for a front-end application. And when it comes to evaluating the performance of Angular, React and Vue, keep in mind that DOM is considered as the UI of any application. Both React and Angular take different approaches to update HTML files, but Vue has the best of both React and Angular frameworks. Let's get deep into Angular vs React vs Vue comparison: 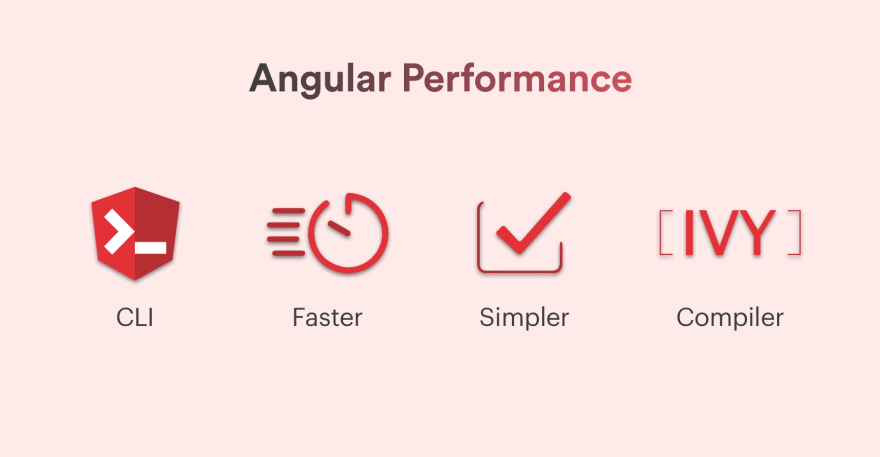 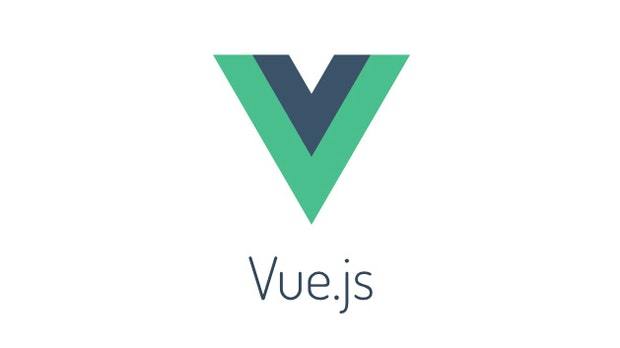 4. Upgrade: Angular vs React vs Vue

Sometimes upgrade from one version to another can be a trouble for the developers. If comparing the upgrade process of Angular vs React vs Vue in 2020, you will be surprised to know that Vue has the most straightforward and quickest for upgrading. Lets deep dive into this.

Angular usually releases major updates every six months. Also, there is a period of another six months before any major APIs are deprecated. It ultimately means, developers have two release cycles of six months to make necessary changes.

React used by some of the big giant like Twitter. also Facebook believes that stability is the biggest concern regarding it. When it comes to Vue vs Angular vs React in 2020, upgrades through versions are generally far more accessible than Angular and Vue. The scripts like React codemod ensure you seamless migration from one version to another and provide stability.

VueJS has the smartest migration options for the developers. If you hire web developers, then they just need to use a migration helper tool to make changes in the site as 90% of APIs remain the same if you choose to migrate from Ver 1 to Ver 2.

Considering the below mentioned size of each framework and library, Vue and React are suitable for the light-weight application, whereas Angular is a good fit for complex and heavyweight applications.

Angular comes with a wide range of features and empowering developers from templates to testing utilities. If you are considering developing a large scale feature-rich application, then Angular is the ideal choice for your next project.

React is not a framework like Angular and does not provide you a big spectrum of libraries as Angular does. Therefore, React is a suitable framework for modern web development.

Vue is the smallest of other frameworks and libraries, as mentioned above, an ideal option for lightweight web development and single-page applications. If you want to choose a library that is simple to access and smaller in size, then Vue is the best option to go with.

6. Deployment: Angular Vs React Vs Vue 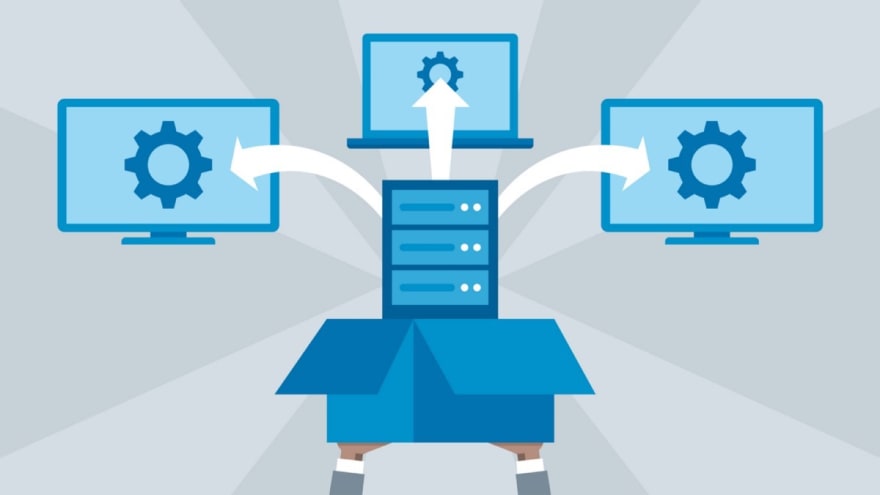 The speed of configuration solely depends upon the number of libraries which are accessible by the developer. Therefore, it is also concluded that developing a web app is faster and easier in Angular than React, whereas React's architecture is more straightforward to scale than Angular.

As Angular is the broad framework that handles everything from project creation to code optimization, it is the most challenging framework for the overall deployment. However, as Angular provides you with a broad choice of features, developers can get a fully optimized bundled app to deploy to any static host by using a single command.

While React doesn't come with the same tooling as Angular or Vue, it makes the tradeoff for flexibility. You can mix and match any library you want with React. With the growth of the ecosystem, we now have CLI tools like Create React App and Next.js.

As compared to Angular and React, Vue's pre-coding structure enables you to quickly deploy the application without compromising with the performance of the application. With a simple command, you can use exactly what you need in development. Developing an app is quick and easy with Vue; therefore, it is an ideal option for startups.

Angular and React is backed by Google and Facebook respectively so of course they have strong community support , whereas Vue is still in an open-source community.

Angular launch in 2010, and it has been continuously maintained and supported by Google and came out with frequent updates every six months.

React is launch and maintained by Facebook in 2013 as a Javascript library that provides you with rich framework functionalities.

Being a new member and didn't have such an active community back like Angular and React, but still, it is used by leading companies including EuroNews, Alibaba etc.

8. How you choose?: Angular Vs React Vs Vue 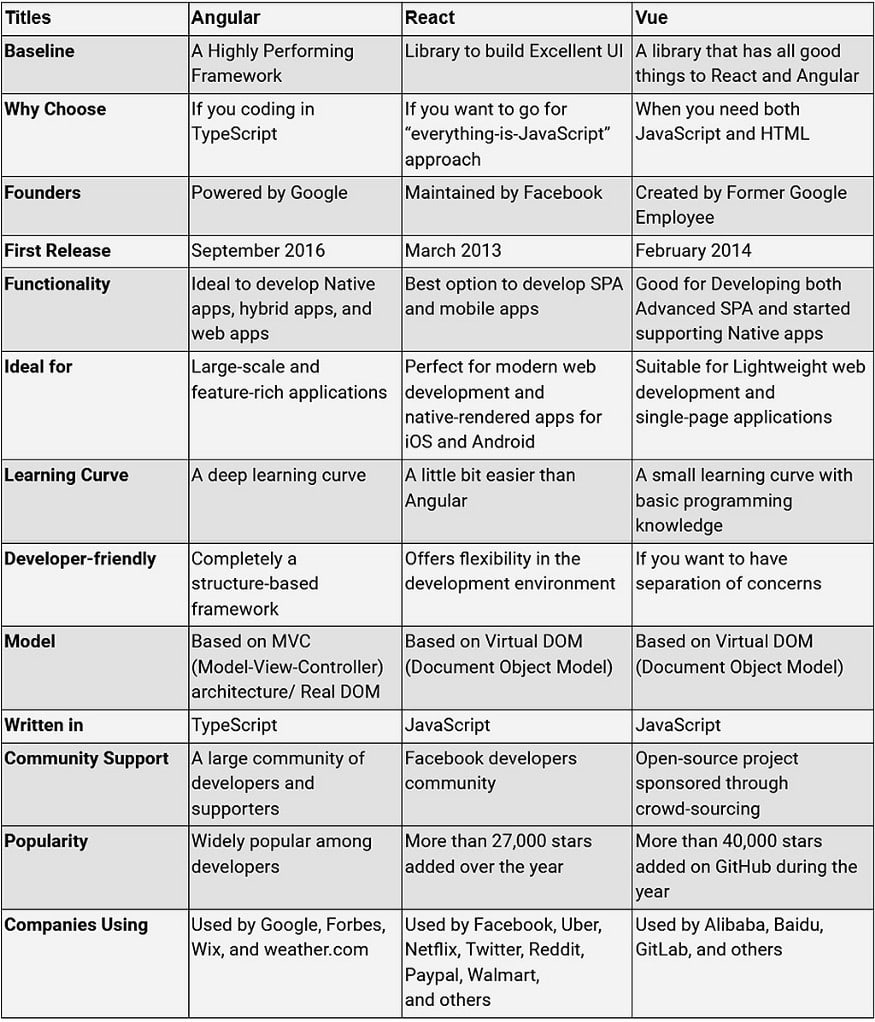 There are lots of frameworks available in the market of JavaScript like Node, Ember, Meteor etc. But Angular, react and Vue are the real king of this kingdom. We compare all the aspects and parameters of each one. The intention is to help you understand the core features & functionality of these frameworks so you can pick the right framework for your next project.

If you want me to make a article on any Web Development concept then leave the topic down in the comments.

Feedback are most welcome

Once suspended, ozakaran will not be able to comment or publish posts until their suspension is removed.

Once unsuspended, ozakaran will be able to comment and publish posts again.

Once unpublished, all posts by ozakaran will become hidden and only accessible to themselves.

If ozakaran is not suspended, they can still re-publish their posts from their dashboard.

Once unpublished, this post will become invisible to the public and only accessible to 🆖 Karan Oza.

Thanks for keeping DEV Community 👩‍💻👨‍💻 safe. Here is what you can do to flag ozakaran:

Unflagging ozakaran will restore default visibility to their posts.