If you have a project in the version older than React Native 0.61, you should probably start thinking about upgrading it to the latest one.

However, this is not an easy task. I’ve spent quite a few days with ups and downs, trying many methods, but success seems far away.

Luckily, I got there, and now I can make this process much easier for you.

Hint: This tutorial been made for Mac OS X.

Mind that this is not an official guideline prepared by Facebook. The steps from the official documentation didn’t work in my case.

The easiest way to upgrade is to do it in the existing project.

Somebody made a fantastic tool named rn-diff-purge. This is a tool that compares different versions of react-native and shows you the differences from the source code level, so it is easy to make changes accordingly to the build.

If there are no errors shown, man you such a lucky person.

If there are some errors, most of them are due to the libraries you are using.

The best way to fix it is to google those issues and look for solutions in Github.

2. Upgrading a React Native app by creating a new project.

The second, the oldest and the best way, for now, is creating a new project in the latest react native version.

After that, you should move all the files from the old repo to the one you have just created.

I will explain to you exactly how to do it at the lowest cost and also how to resolve any errors encountered on the way, so you won’t spend endless hours investigating it.

That line of code upgrade your React Native global library or install a new one if you did not install react native library before.

After upgrading the library to the latest version, you have to create a new React Native project. To do this use the command below: 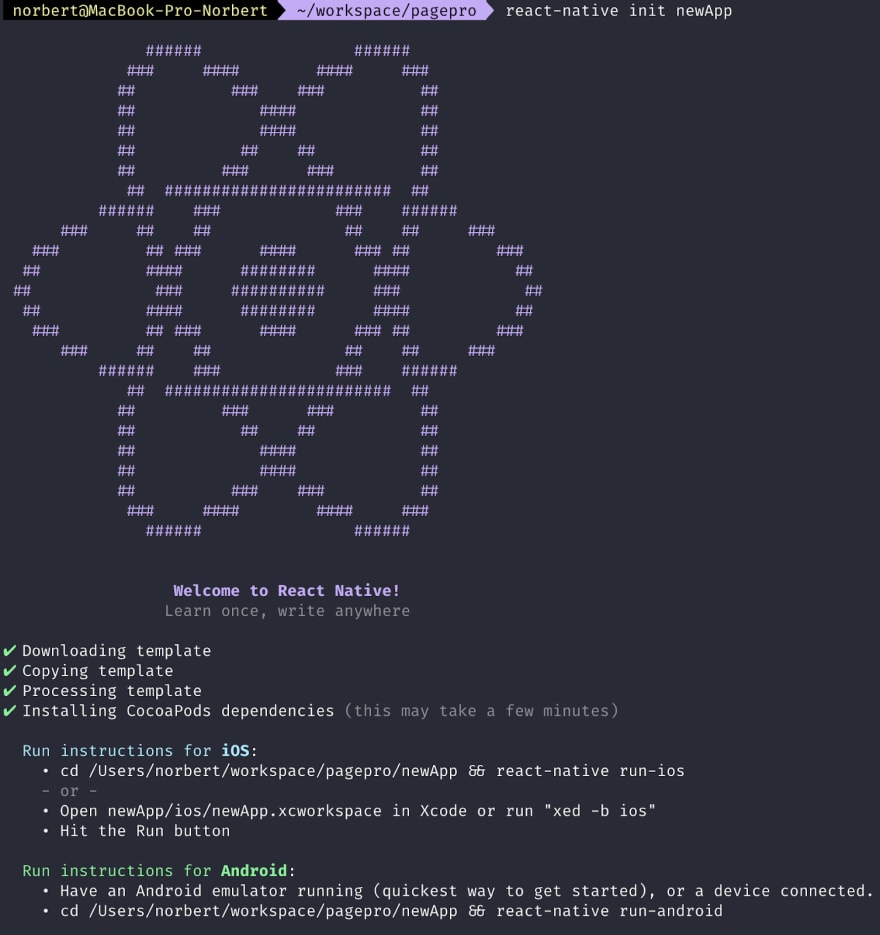 “NewApp” it’s a new RN project name. You can put any name out there if you want.

In this step, you have to get Cocoa pods installed and install the pod created for your iOS project. To make that happen, put the following command to the terminal:

In the next step, install the pod file generated in your iOS project. You can easily do it by running:

Assuming you are in your new react native project, you should go to the iOS project first (cd ios) and then install pods.

After running this command you should get a result similar to:

If your XCode is in the version below 10, then you should upgrade your XCode to a version that is compatible with your Mac OS. You can do it easily using the App Store.

Now, try to open a new project in upgraded XCode and then try to build the app.

The app should be built successfully at this point. Additionally, try to run a new app using react native CLI. To do that, you should put the following command into your terminal:

If your new application works fine, the next step is to move your source code files from your old react native app to the newly created and upgraded one.

These are the basic ones needed to do a basic code migration.

If you have something more complicated, you might need to copy more configs, code files or do extra installations.

You may also need to go through some files and move the differences between old and new apps. But remember, you must be very careful:

There is no ideal way to upgrade react-native.

Steps presented above are just for a simple, and not too complicated apps. For more complex ones, you might obviously encounter more issues.

In this article, I’ve put ways to fix the most common issues. However, most of the problems come with third-party libraries like navigation, camera, upload files, etc.

You can also meet problems with deprecated libraries that work on the old version and haven’t been updated to new ones.

For those issues, there is only one way - look for a reason in Google or GitHub.

If you are planning to use React Native in your next project, let me assist!

How to Use MQTT in the React Native Project

TIL: How to get a live preview of a inferred typescript type in your editor