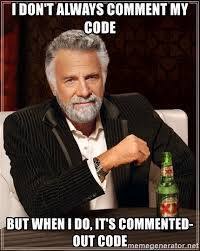 "I'm just going to keep this around just in case." I thought, commenting out that block of code before heading to experiment on another thing. Due to my adventurousness, one block comment became two, three, and so on day-on-day. After a while, they started to creep in and became too distracting!

It's way to easy for me to comment out code I ain't sure about when I'd like to experiment something, event though I could always fork a branch. It's way easier to come back to where the comments are that to git checkout or git stash! This is especially really easy when I'm not in a team where code review is a ritual.

When I build something, there's always a conflict at every step of the way between making it "right" or moving fast. A balance seems like a faraway Utopian dream because that would take even more thought and time than just falling on either side.

At my worst, my code can be up to 40% comments! It's downright ugly but thinking too much about what to do can really break the train of thoughts or the fun when I'm on fire!

What are your ways of coping with this comment-out syndrome?

In Silicon Valley (the show), which one are you ? Bachman, Gilfoyle, Richard Hendricks, Dinesh or Big Head ? 😁

My Journey: 14 years of writing code

Why I Became a Software Developer - My Journey

Pan Chasinga
Developer advocate at Filecoin/IPFS
Learn to Build a Parser in Rust for Fun and Profit
#rust #parser #tutorial #codenewbie
If Computer were a person, what is your relationship with it? ❤️🖥️💔
#watercooler #discuss
Boost Productivity with Rust
#rust #productivity #programming #codenewbie