TLDR:
Fonts can be more a11y friendly by:

Alternative ways to interact with the web

My current job and a few post inspired this post. There is a keen interest on the business side towards making the application more accessible and we are doing some heavy lifting in order to facilitate the interaction for most users.

Some of those include but are not limited to:

Most of us interact with a mouse and a keyboard, but there is a wide range of people that just can't. Depending on their condition, our users might use assistive software or devices like:

What we can do about it

As you can see, there is a wide variety on conditions, for the purpose of this post, visual impairment is the most relevant for us. Keep in mind that it also includes people wearing glasses due to some degree of myopia, astigmatism. Even poor illumination or a bad monitor can pose some difficulty for experiencing the web.

Let us begin with the end in mind. Most developers are not expected to design, but there are situations where our input is required, so I want to give you some heuristics in order to make some a11y aware decisions.

In this post, our goal is to improve the fonts for readability. According to Wikipedia:

Readability is the ease with which a reader can understand a written text. In natural language, the readability of text depends on its content and its presentation.

As a rule of thumb, readability most come first.

Fonts serve different purposes, they help determine the atmosphere of a website, might even remind us of things and help us better convey a message.

In a world with ever more mobile internet access, having a smaller font might be a good optimization, specially since screens are smaller on mobile devices. However passing a certain threshold, it messes up readability, zooming in might break your layout. Having bigger fonts as a default, makes our layout less prone to break when zooming in.

Bigger fonts are easier to read from a distance. Here is an article with use cases.

Could you avoid serifs?

Serifs are the small lines at the end of a larger stroke in a letter. The image below explains it way better. 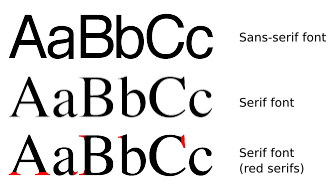 During the early days of the web, there used to be a debate about why sans serif fonts are better for screens with low resolution. However, the reasons to avoid them are:

When two colors are similar, if the difference is two subtle, people might not perceive the difference, this is why contrast matters. Here is the contrast definition:

Contrast is the difference or degree of difference between things having similar or comparable natures.

As crazy as it sounds, two people can be seeing the same color, with one hexadecimal value and still perceive a different color. If the ability to perceive the difference between two colors is too high, this is what we call color blindness.

The question that arises is: How do I if the colors I'm using are contrasting enough? I am glad you asked.

The unit we use as a reference to measure the contrast between two colors, is called contrast ratio A contrast ratio of 4.5:1 is the minimum Web Content Accessibility Guideline.

Here are tools to help you pick more contrasting colors:

In the later months, having a dark theme has become something cool, appreciated by the users and hype-worthy.

What does it take to provide a dark theme?

The question I am trying to pose is, could we provide an a11y theme too?

For starters, an a11y theme could have two things:

That's all folks, thanks for taking the time to read this article. I'm building a blog with all my blog posts. On the mean time, you peek into my future blog posts along with all the previous ones in this repo.

You can find me as @papaponmx on your favorite social network.

Jaime Rios
I teach aspiring devs how to code modern Front End Applications in a way that is easy to understand so they can get their first job in tech.
Array.reduce() for newbies
#javascript #webdev #codenewbie #beginners
Solving my own problem with Software
#showdev #react #javascript #webdev
Progressive Enhancement: Respecting web browser preferences in a post ES6 world
#html #javascript #webdev #css

Once suspended, papaponmx will not be able to comment or publish posts until their suspension is removed.

Once unsuspended, papaponmx will be able to comment and publish posts again.

Once unpublished, all posts by papaponmx will become hidden and only accessible to themselves.

If papaponmx is not suspended, they can still re-publish their posts from their dashboard.

Once unpublished, this post will become invisible to the public and only accessible to Jaime Rios.

Thanks for keeping DEV Community 👩‍💻👨‍💻 safe. Here is what you can do to flag papaponmx:

Unflagging papaponmx will restore default visibility to their posts.