This is the sixth post of a series that starts here.

In this post, we're going to create a High Score table. We'll create an Azure function as the server, and we'll store the scores themselves in Azure Tables.

Let's start with the table.

Create a new storage account in Azure, then add an Azure Table to it:

You'll see a sign trying to persuade you to use Cosmos DB here. At the time of writing, using Cosmos was considerably more expensive than Table Storage. Obviously, you get increased throughput, distributed storage, etc with Cosmos. For this, we don't need any of that.

An Azure table is, in fact, a No SQL offering, as you have a key, and then an attribute - the attribute can be a JSON file, or whatever you choose. In our case, we'll set the key as the user name, and the score as the attribute.

Once you're created your table storage, you may wish to use the Storage Explorer to create the tables, although that isn't necessary.

Obviously, this should actually point to the domain that you're using, rather than a blanket 'allow', but it'll do for testing.

Before we can store a high score, the user needs a username. Let's add one first.

The state is raised to the main Game.jsx:

We'll create an Azure Function to update the table. In Visual Studio, create a new Windows Azure Function App (you will need to install the Azure Workload if you haven't already): 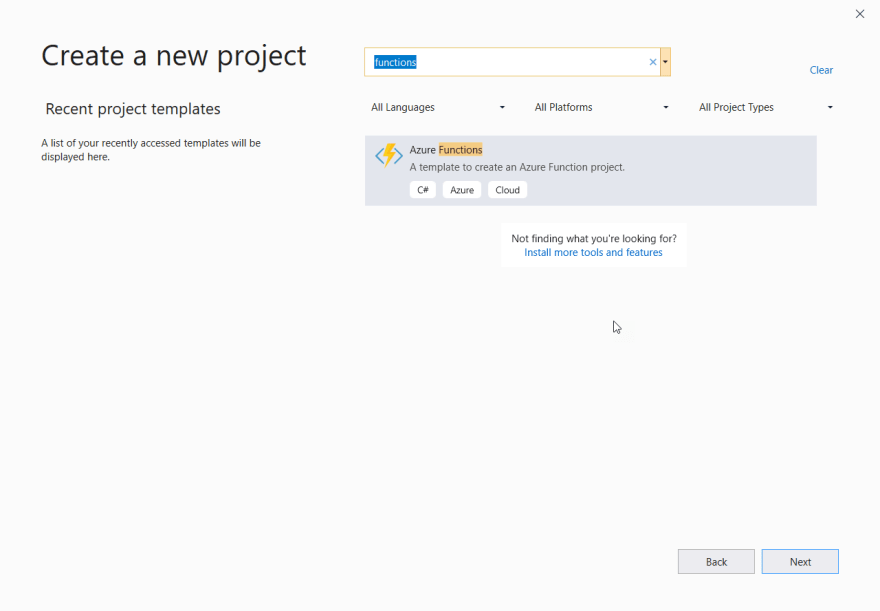 You'll be asked what the trigger should be for the function: we'll go with HttpTrigger. This allows us to call our function whenever we please (rather than the function, being say scheduled.) Next, we'll need to install a NuGet package into our project to let us use the Azure Storage Client:

We're actually going to need two functions: update and retrieve (we won't be using the retrieve in this post, but we'll create it anyway). Let's start with a helper method:

For testing purposes, add the account name and key into the local.settings.json:

The values here are taken from above - where we copied the access keys from Azure (whilst these keys are genuine keys, they will be changed by the time the post is published - so don't get any ideas!

If you've seen the default example of this function, it's actually not that different: it's a POST method, we take the name and score parameters from the query string, build up a record and add the score. The function isn't perfect: any conflicting names will result in overwritten score, but this is a copy of a spectrum game - so maybe that's authentic!

The second function is to read them:

All we're really doing here is reading whatever's in the table. This might not scale hugely well, but again, for testing, it's fine. The one thing to note here is ExecuteQuerySegmentedAsync: there seems to be very little documentation around on it; and what there is seems to refer to ExecuteQueryAsync (which, as far as I can tell, doesn't, or at least, no longer, exists).

Let's run the Azure function locally and see what happens: 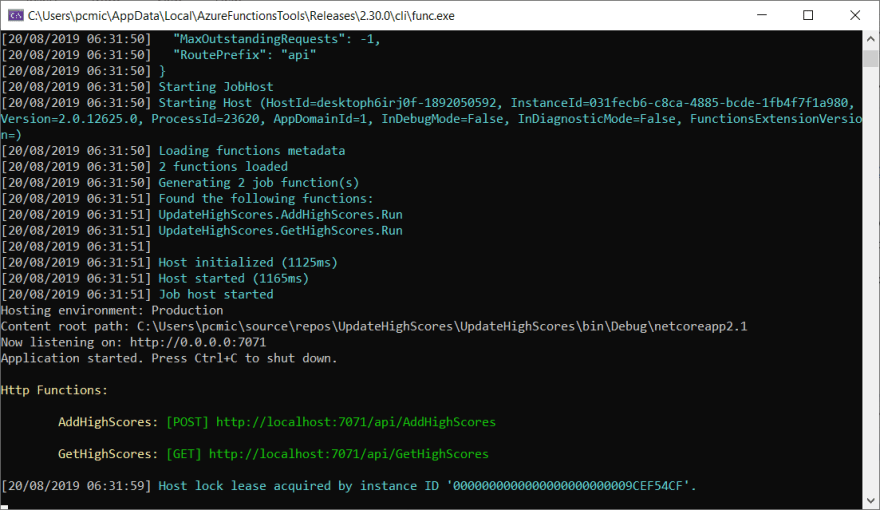 As you can see, Azure helpfully gives us some endpoints that we can use for testing. If you don't have a copy already, then download Postman. Here you can create a request that calls the function.

I won't go into the exact details of how Postman works, but the requests might look something like this:

To prove to yourself that they are actually working, have a look in the table.

There is now an online Storage Explorer in the Azure Portal. Details of the desktop version can be found in this post.

Update High Score from the Application

Starting with adding the high score, let's call the method to add the high score when the player dies (as that's the only time we know what the final score is):

And that's it - we now have a score updating when the player dies. Next we need to display the high scores - that'll be the next post.

This was originally posted here.

How to build a portfolio website with React & Tailwind CSS

Once suspended, pcmichaels will not be able to comment or publish posts until their suspension is removed.

Once unsuspended, pcmichaels will be able to comment and publish posts again.

Once unpublished, all posts by pcmichaels will become hidden and only accessible to themselves.

If pcmichaels is not suspended, they can still re-publish their posts from their dashboard.

Once unpublished, this post will become invisible to the public and only accessible to Paul Michaels.

Thanks for keeping DEV Community 👩‍💻👨‍💻 safe. Here is what you can do to flag pcmichaels:

Unflagging pcmichaels will restore default visibility to their posts.