Here is a story about a popular online store - Uncle Bobba’s Bubble Tea. Uncle Bobba had a traditional web application that looked like this: 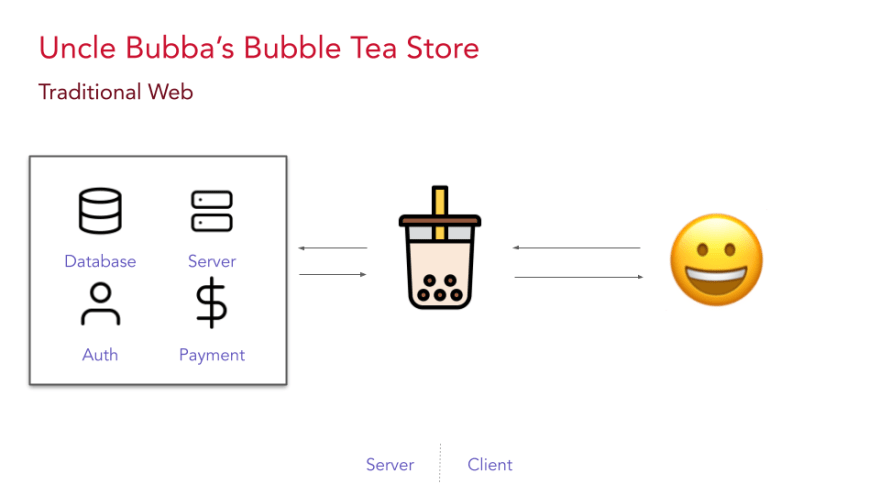 This is a simplified diagram and the idea behind this is to show you a rough example of how a typical e-commerce website looks like. It’s not limited to auth and payment services and can also have other moving systems. When the user requests a page, the server is generating the content on the server side before returning the content back to the user.

It works. It does it’s job. Uncle Bubba had happy customers.

Then came a time when Uncle Bubba decided to release a new product. The news spread fast across the land and Uncle Bubba found a lot of customers coming to his store: 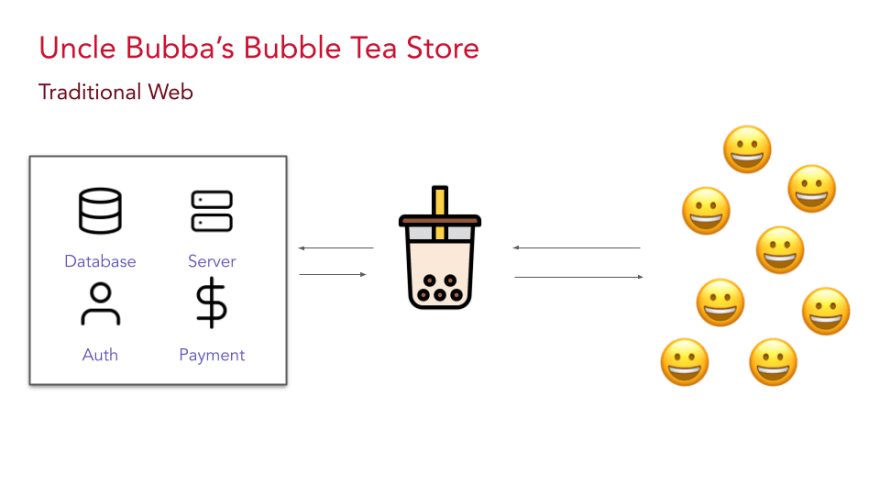 Suddenly, things did not go to plan. The team soon discovered the pages were not responding. There was lag in server response and API calls between services were timing out. The systems were so heavily coupled together and it was too difficult to pin-point where it went wrong. Not long after, Uncle Bubba found himself with some angry customers who didn’t get to enjoy his new bubble tea flavours. 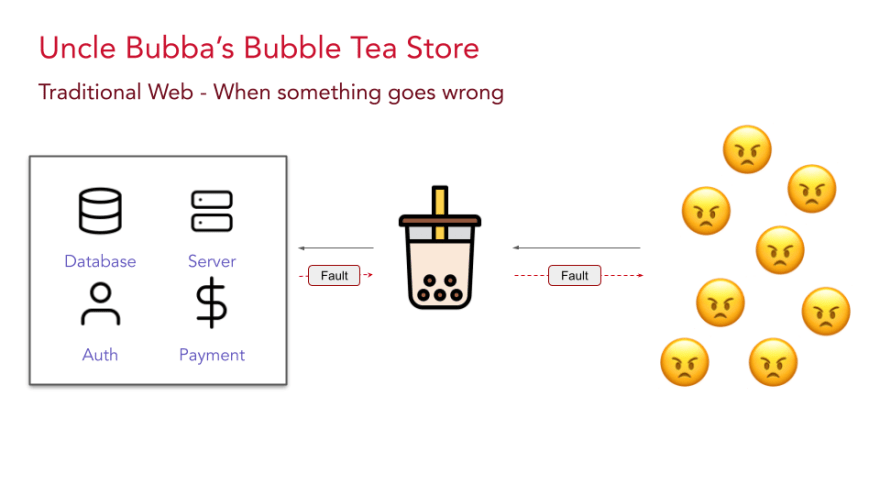 This could be caused by many reasons in Uncle Bubba's architecture and there is a high chance of happening in systems that are highly coupled with so many moving parts.

Surely there is a way to solve this. After all, we are only serving a product catalog of some text and images. What if we can remove this black box (the server in the diagram) and allow the users to interact directly with the HTML without needing a server to generate the content on the fly every time the user requests the page?

This is where Jamstack comes to play.

Statically generating your UI application and decoupling it from your other systems. 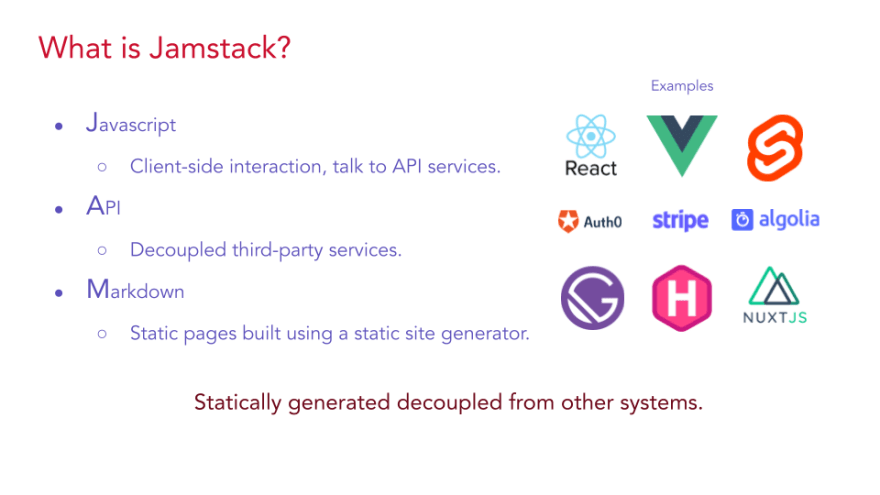 Javascript Client-side interactions such as navigation and talking to API services.

API Interact with third-party services that are decoupled from each other.

Using your favourite front-end framework (eg React, Vue, Svelte) to build a pre-rendered copy of your UI application and deploying it on a CDN. Think of it like taking a snapshot of your UI and storing it on the cloud. Your users do not need to interact with your server.

How is a Jamstack site generated?

This happens in the continuous-integration (CI) build pipeline: 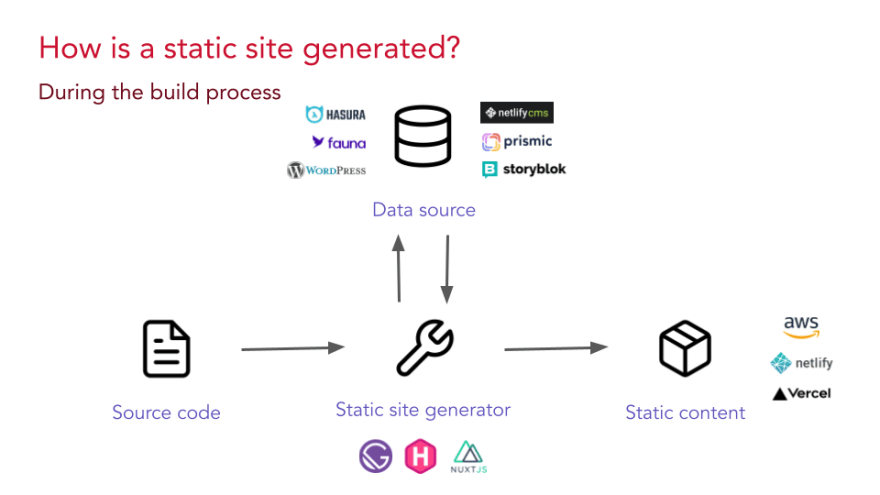 Source code It all starts in the git repository. Jamstack requires the application stored in a version control.

Static content Once the package is bundled and optimised for the web, it is deployed to a CDN. Which is an important element of Jamstack and it one of many reasons why Jamstack is so fast - the pre-rendered static HTML content is served around the world.

This process of building a Jamstack application moves the server generation of your page to the build pipeline.

How does it look like now that there is no server?

There is no connection with the users and the build pipeline. The users are only requesting the prebuilt HTML markdown that has been served from the CDN and the user is only interacting with the client-side APIs. 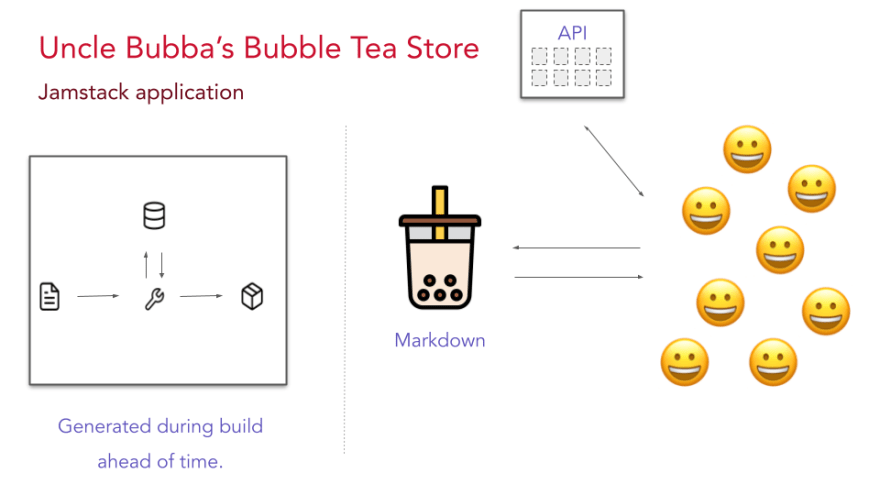 Some limitations that the community and static-site-generators are working on solving:

By moving away from a traditional architecture, an online e-commerce store can now handle a large number of users by serving statically generated pages from a CDN - fast rendering pages decoupled from the underlying systems that were used to generate the content.

Jamstack decouples your UI from your other systems, making it a powerful approach in building high performing applications that can scale and is cost-efficient.

Once suspended, petermekhaeil will not be able to comment or publish posts until their suspension is removed.

Once unsuspended, petermekhaeil will be able to comment and publish posts again.

Once unpublished, all posts by petermekhaeil will become hidden and only accessible to themselves.

If petermekhaeil is not suspended, they can still re-publish their posts from their dashboard.

Once unpublished, this post will become invisible to the public and only accessible to Peter Mekhaeil.

Thanks for keeping DEV Community 👩‍💻👨‍💻 safe. Here is what you can do to flag petermekhaeil:

Unflagging petermekhaeil will restore default visibility to their posts.