A DoS is an attack whose goal is to render the target (machine, network, etc.) inaccessible. This is done either through flooding traffic or through a tailored payload that will cause the machine to crash.

In a DoS attack the point of origin will be one machine.

With a DDoS on the other hand the attack originates from multiple sources. This is usually more powerful and destructive. 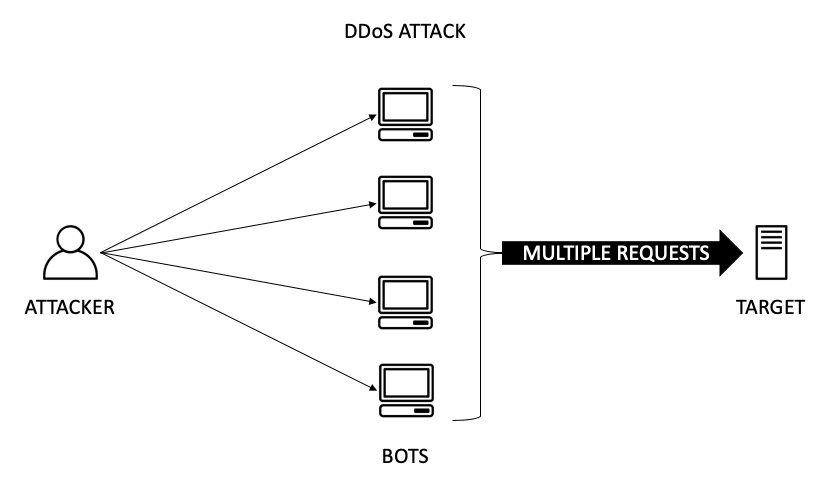 These attacks may be used as a way to ransom an entity by requiring a payment to stop the services from being unusable. The goal can be to force secondary and backup services to kick in, which themselves may be vulnerable to other types of attacks.

Below are the most common types of Dos / DDoS attacks:

Configure routers and firewalls to reject fake traffic. It is also important to make sure they are up to date with the latest patches.

Check that all devices are secured with antivirus, launch regular security scans and update software and firmware. Also make sure you change default passwords on IOT devices as they are the common source for bots.

Make sure you have extra network bandwidth as well as network redundancy. This will help mitigate surges in traffic at the beginning of DDoS attacks until active measures kick-in.

Use an anti-ddos service like Cloudflare or Advanced Amazon Shield they will help you identify and block non-legitimate traffic.

Contact you Internet Service Provider (ISP) as fast as possible as they might be able to re-route traffic into a null route where the fake traffic will get lost.

If your business is critical you can look into having a backup ISP to let you switch over in case of a DoS or DDoS attack.

Impact and how to recover from it?

The critical part to recovering from a DoS / DDoS attack is to analyze the details of the attack. Here are a key points to look at:

This information will help you identify the areas in your infrastructure that needs a security review to be able to handle and mitigate DoS / DDoS.

Depending on your business nature you may disclose the attack to either clients or users of the platform. In some country, a police report might be compulsory.

Have a look at live information on DoS and DDoS major attacks!

Pixium Digital is an agile software development company with their headquarters located in Singapore. We focus on shaping our clients project from ideas to successful project launch.

Cyber Security is a big part of any project we have to deliver. Very often we have been the witness of lack of awareness or caution from various providers or clients we have worked with. We aim to share those little tips to the community so that with everyone's effort, we can make the web a safer place.

Reach out to us