NOTE: I joined Mastodon a bit more than a week ago. This is my personal recollection of my first 24 hours on the platform. It was originally published on my blog.

So, you might have heard about Mastodon. A micro-blogging alternative to Twitter, boasting itself for being 100% open-source, and for its decentralised nature.

Unlike traditional social networks like Twitter and Facebook, Mastodon is not driven by a single company profiting by selling your identity to others, but by a network of instance maintainers and supporters who put their own money on the line. Ensuring that Mastodon is going to live in the long term sounds easy...on paper. Many of the instance maintainers gladly accept donations through Patreon or other means, and of course, adding your own instance to the network is relatively easy. Whether this is actually going to work in the long run, is a different question. There has been a list of alleged P2P Facebook/Twitter killers, which for one reason or another, have failed to the critical mass needed for mass adoption. I am willing to bet on a hopeful "YES".

Being an early adopter of all things digital, and annoyed by the direction that Twitter is taking, I signed up for an account yesterday: @preslavrachev@mastodon.technology. I gladly encourage everyone to join and follow me. In case you ask yourselves what @mastodon.technology has to do with my username, this is the name of the instance where I registered my account.

Instance names are somewhat like email domains. Being on a particular instance ensures that one will get the entire flow of communication inside the given instance. Just like email however, cross-instance communication is an essential part of what makes Mastodon work. In fact, a large percentage of the people I follow now are not on the same instance as I am but communicate flawlessly with each other.

Just like with email, the real advantage of having multiple identities on Mastodon comes when one wants to claim allegiance to a certain organisation, group, or topic of interest. Say, your company decided to run a private Mastodon instance. Having an identity there would allow you to follow locally shared chatter, but also prove to the rest of the Mastodon Universe that you belong to the given organisation. As of yet, I haven't yet figured out how multi-identity management really works, so I might have to leave this part for a later post.

The last 24 hours of being on Mastodon feel very much like the early days of Twitter. When I joined Twitter in 2008, it was still a very turbulent time for both the service and the team. There have been way too many occasions when the fail whale appeared on my screen, something which I have not really witnessed during the past couple of years. 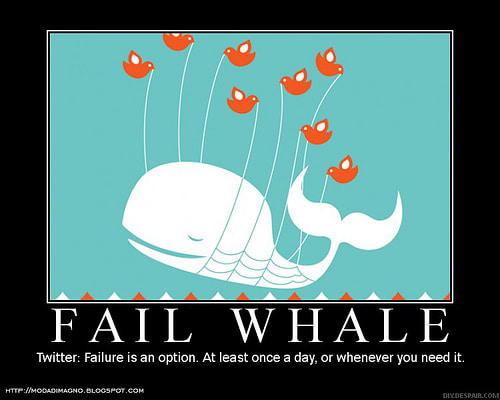 With the frequent downtimes and shakes inside the team, something else slowly started going away - the community spirit of the early days. Don't get me wrong, I still use Twitter on a daily basis, though somewhat automatically. The community is still there, it is just that the bond and the friendly chatter of the early days is gone. It got replaced by incessant advertising (which I fervently mute on every occasion) and a stream of posts clearly optimised to target eyeballs and clicks. And of course, the clear statement to third-party app developers. I still remember the early days, when budding app or Web developers would use the developer-friendly Twitter API and boast with the client they developed. In no small terms, it was the developers who helped Twitter reach mainstream fame, and it is just sad that things had to reach their current state. Looks like my thoughts are being shared by the community as well: 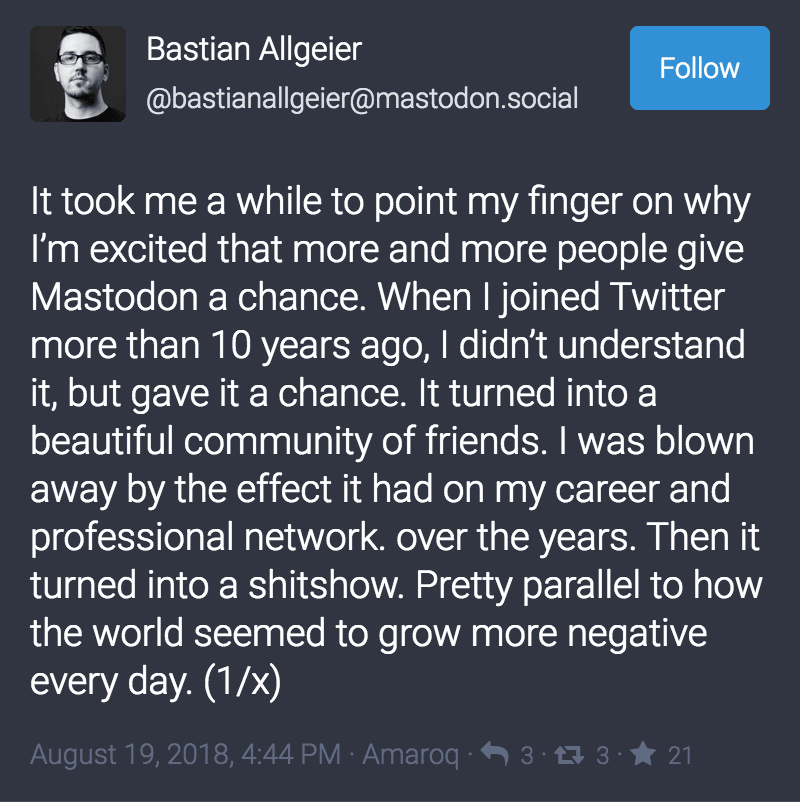 Back to Mastodon, during my first 24 hours, I spent an hour browsing among the many available alternative clients for both iOS and macOS. I spent another couple of hours waiting for the instance to go back up after a maintenance downtime that took longer than expected. Everyone else in my place would have backed off and left, but this just raised my level of excitement. It showed me that there is some actual work needed, and that the community is working hard to put things where they should be. I can but clap in respect to the efforts that the maintainers of my instance put yesterday, in order to ensure its stability in the upcoming days and weeks. During the hours when the instance was online, I managed to set up a few friendships and engaged in some interesting discussions. It seems like a bunch fo the early spirit is back. People reply more often, and others join in to the chat. I have the feeling that conversations flow more easily.

In many respects, being on Mastodon feels like the Wild West. There are many open questions I have, like how to manage multiple accounts, what would happen with my identity, if an instance dies. I am not yet sure if I am going to leave Twitter for Mastodon (not in the foreseeable future, at least), but it sure feels exciting to try a refreshing look at what Twitter might have evolved into, had it not been forced to turn into an ordinary business.

Once suspended, preslavrachev will not be able to comment or publish posts until their suspension is removed.

Once unsuspended, preslavrachev will be able to comment and publish posts again.

Once unpublished, all posts by preslavrachev will become hidden and only accessible to themselves.

If preslavrachev is not suspended, they can still re-publish their posts from their dashboard.

Once unpublished, this post will become invisible to the public and only accessible to Preslav Rachev.

Thanks for keeping DEV Community 👩‍💻👨‍💻 safe. Here is what you can do to flag preslavrachev:

Unflagging preslavrachev will restore default visibility to their posts.