While creating this PWA, I wanted to store the markdown data into the MongoDB's Atlas.

The above markdown would be stored as a single string in the database.

While reading the data from the Atlas, the line-break escape character, i.e. \n would come as already escaped, i.e. \\n notice the double '\'.

Therefore, while parsing it as HTML, the line-break wouldn't be read as a line-break character but a literal \n character.

The Markdown parser(marked.js) expects a line-break between each block(headings, lists, paragraphs, quotes, etc) to render them as expected. Otherwise, it will render them as a single line of string.

In the example above, it renders everything as a heading level 1.

When the Markdown parser sees # token, it assumes that the text after it(until a line-break) is to be rendered as a H₁. Thus, everything including lists, paragraphs, quotes are rendered as <h1> because of no line-break.

The doubly escaped character \\n was the culprit.

As a workaround, I tried to replace all \\ns with \ns from the markdown string before passing it to the Markdown Parser.

Solved! This is how the rendered output would look like after the fix 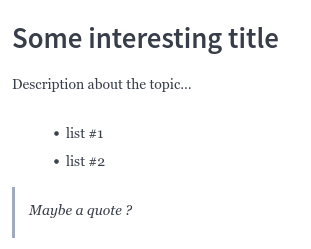 Rahul Dahal
A Web Developer with an eye for usability.
Side Project Sunday! How's it going?
#showdev #sideprojects #discuss #watercooler
How to get started with using APIs
#beginners #productivity #api #programming
What If Animals Could Code...
#jokes #discuss #webdev #programming

Once suspended, rahuldahal will not be able to comment or publish posts until their suspension is removed.

Once unsuspended, rahuldahal will be able to comment and publish posts again.

Once unpublished, all posts by rahuldahal will become hidden and only accessible to themselves.

If rahuldahal is not suspended, they can still re-publish their posts from their dashboard.

Once unpublished, this post will become invisible to the public and only accessible to Rahul Dahal.

Thanks for keeping DEV Community safe. Here is what you can do to flag rahuldahal:

Unflagging rahuldahal will restore default visibility to their posts.